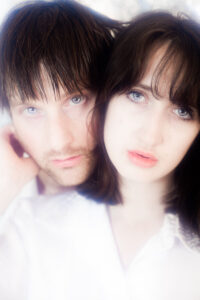 Rabenberger’s résumé includes opera, acrobatics, ballet, fencing skills and stage combat among her skills and talents. Meanwhile Kerby moved from Montreal to Berlin in 2018, but despite this, BLUE HAWAII released their third album ‘Open Reduction Internal Fixation’ in 2019.

With songs sung in German and English, DAS BEAT are quirkily rhythmic with an eye on the unorthodox nature of performance art, propping up a mix of Neue Deutsche Welle, Italo disco and dreamy atmospherics as they seek “to blast both boredom and boundary”.

With Amanda Lear and Gina Kikoine as influences, the hypnotic electro-cabaret of ‘Bubble’ is incessant detached disco for the outsider, as Rabenberger expresses the emotions of dancing alone. Despite the intensity, like its two muses, the bilingual alto vocal and vocoder delivery is also strangely playful. Meanwhile the ‘Identität’ title song utilises a Moroder-esque throb with some unexpected flute flourishes and shouty Mädchen expression like MALARIA! doing ‘I Feel Love’!

Much more laid back and inspired by the Cretan princess in Greek mythology, ‘Ariadne’ uses a charming vintage drum box and minimal harmonic six string to apply a muzak vibe that allows Rabenberger’s strident vocals to shine with the message that following break-up can come strength.

The closing number ‘Jackie’ is the EP’s most conventional sounding offering, being more guitar focussed with a lively use of drums despite the overall tone of resignation that is reminiscent of Nico, although not so quite so Götterdämmerung. Despite the Austere Gothic, there is light creeping through from the synth and the flute.

Released on Arbutus Records, the Canadian independent that was the home to GRIMES before she hooked up with Elon Musk, ‘Identität’ is a fine debut EP from DAS BEAT. Based on this diverse showcase and when the world is allowed out to play again, if more music is forthcoming from Eddie Rabenberger and Agor Kerby, that would be most welcome. 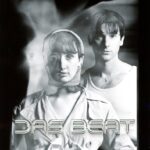 The ‘Identität’ EP is released by Arbutus Records on 4th June 2021, available from https://dasbeatofficial.bandcamp.com/album/identita-t-ep