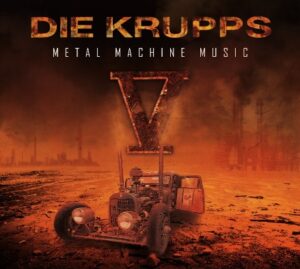 It gives an idea as to what one might expect from the new DIE KRUPPS long player. Following the more electronic-based ‘Machinists of Joy’, it’s a return to a sound which indelibly influenced RAMMSTEIN and several other metal / electronic hybrid bands. The crunching twin guitar riffs are back up in the mix and in most cases, Ralf Dörper‘s synth/sequencer programming (regrettably) takes more of a back seat in the musical proceedings.

The shift back to a more guitar-oriented sound is possibly an attempt to reclaim the throne of a genre that DIE KRUPPS undeniably pioneered, especially as RAMMSTEIN are currently on a hiatus to allow lead vocalist TIL LINDEMANN to promote his solo album. With ex-drummer Volker Borchert returning to the fold and the addition of guitarist Steve Roemhild, the overall concept of ‘Metal Machine Music’ is a far more live and rocky sounding one.

The prelude ‘Die Verdammten’ is a doomy and Teutonic sounding introduction to the album with filtered gothic foreboding strings and hard hitting guitars heralding bad things looming on the horizon… ’Kaltes Herz’, the first proper song on the album, is a high octane thrash with driving synth bass at its heart, its delayed Koto intro lulling the listener into a false sense of security. Double A-sided single ‘Battle Extreme’ (vocalled in English) is another competent / fast BPM industrial metal track with very little to distinguish it from the previous one, although some later high pitched synth squeals provide a bit of welcome respite from the angry guitars.

‘Fly Martyrs Fly’ (the other side of the single) is the most electronic sounding track so far, LFO-filtered synths mixed with an EBM bassline contrast with guitars which are a little further back in the mix this time. There is also the addition of some welcome electronic drum textures mixed in with the live percussion. Lyrically, halfway through the track, it becomes apparent that the song is based around the Germanwings Flight 9525 air disaster where the co-pilot of the plane locked his captain out of the cockpit before setting it on a fatal trajectory into a nearby French Alps mountain. News reports of the event are recreated using speech synthesis in the middle section of the song, before the crunching guitars and sequencers return. 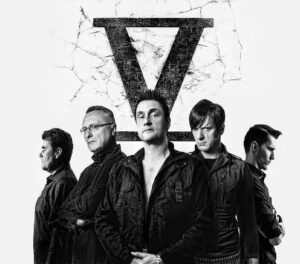 ‘Road Rage Warrior’ musically and sonically reinforces the album cover’s ‘Mad Max’ theme and is probably the most original sounding track on the album in that it doesn’t steadfastly stick to the generic Industrial Metal template.

Sounding more like THE PRODIGY gone metal in places, it weirdly includes the frantic / trippy sequencer part from PINK FLOYD’s ‘On The Run’ early on in the piece. Although a brave attempt, the sung title hook in the middle eight doesn’t quite cut it against the more antagonistic / shouty vocals.

‘Alive in a Glass Cage’ is the standout melodic cut on ‘V – Metal Machine Music’ – with a properly sung lyric throughout, it introduces a softer sound to the album and with the exception of its middle eight guitar riff, relies more on melody than aggression. Also present are echoes of NEW ORDER’s ‘This Time of Night’ in the bass synth and the vocals of Andy LaPlegua from COMBICHRIST’s side project ICON OF COIL – it would have been fruitful for this sound to have been explored more on this album, if only to provide respite from some of the less subtle in-your-face guitar-oriented songs. The appropriately named ‘Kaos Reigns’ ups the tempo even further, with frantic double-kick drums and guitars to match. When eventually joined by several cross-panned synths, the track leaves you exhausted and breathless by the end…

In a way, one could feel aggrieved for DIE KRUPPS in the way in which RAMMSTEIN took their sound, ramped it up several notches (with added pyrotechnics), ran with it and became a global, multi-million-selling act. But as in many cases, sadly often the musical innovators don’t always get their just rewards and recognition.

If you are fan of big metal guitars and live drums mixed with bass synths you will ADORE this album, it certainly reinforces DIE KRUPPS (alongside MINISTRY and NINE INCH NAILS) as THE pioneers of the Industrial genre. But those seduced by the electronic textures that ‘Machinists of Joy’ offered may come away feeling disappointed with the emphasis on metal rather than machine in ‘V – Metal Machine Music’.

‘V – Metal Machine Music’ is released as a CD, deluxe 2CD and download via Oblivion on 28th August 2015

DIE KRUPPS play The Garage in London on Wednesday 16th September 2015, please check the website for other dates