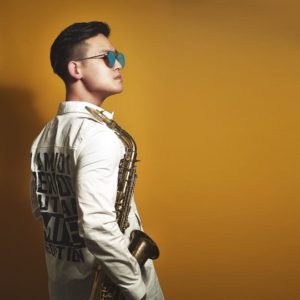 DISQO VOLANTE is Korean-American multi-instrumentalist Matthew Booth, a man who loves his synthpop, but also his sax!

Following his debut EP ‘Re: Lit’

; having learned some lessons from some of the more overdriven aspects of that first release, ‘Yellow Fervor’ has better production values and adds a funkier twist to proceedings.

This twist comes over like a cross between PRINCE and YELLOW MAGIC ORCHESTRA, coming to the fore on the brilliant and appropriately Batman themed ‘Gotham City’.

A fascinating mix of East meets West over synths and sax, DISQO VOLANTE exhibits a highly unusual and unique sound. But beginning with the ‘Yellow Fervor’, the PRINCE influence is loud and clear from the off, with Booth coming over vocally like a more assured Yukihiro Takashashi, while augmented by lashings of sax.

Glistening with synth arpeggios, ‘Your Princess Is In Another Castle’ sees Booth use vocoder treatments and the blip of a Casio VL-Tone for a more obviously electro offering with the sax slightly more restrained.

The house-flavoured pop of ‘Net Loss’ is an interesting diversion with the sax integrated seamlessly like NEW ORDER’s ‘Round & Round’ taking a slight jazzier diversion towards fellow Mancs A CERTAIN RATIO, with the unexpected presence of a rock guitar solo just to add to the fun! 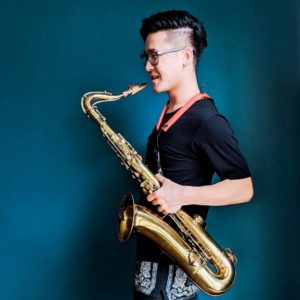 Meanwhile, ‘Seoul’d Out’ is the most eccentric song on the EP, reminiscent of Thomas Dolby in his more bonkers moments. While this is not ‘Hyperactive’, the freeform nature of ‘Seoul’d Out’ impresses with its musicality if nothing else

Quite what listeners will make of the ‘Yellow Fervour’ EP is anyone’s guess but boring it isn’t.

For the crazy genre blends and uses of seemingly incongruous modes of instrumentation, DISQO VOLANTE deserves an award, or a straitjacket, or something 😉