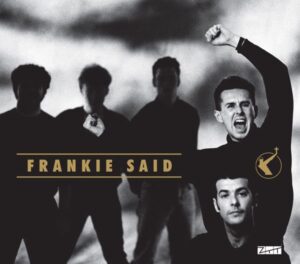 Frankly, does the world really need another FRANKIE GOES TO HOLLYWOOD compilation?

For a band who released only two albums, they have been documented more than most already with three greatest hits collections and several remix packages.

Of those, the first one ‘Bang…’

in 1993 was the probably the best, serving the Frankie phenomenon in mostly bite size single edit portions for the casual but interested observer.

But FRANKIE GOES TO HOLLYWOOD are perhaps remembered for kick starting the multi-format single revolution. ‘Two Tribes’ in particular had a new remix issued every four weeks to maintain interest. Many revelled in the excitement of the endless artistic possibilities offered by the Fairlight, Synclavier, PPG and the like but for some music fans, the 12 inch mix was on occasions, an unnecessary evil.

Just because a song can be extended and reworked to submission doesn’t mean it has to be… FGTH’s bassist Mark O’Toole snorted to International Musician & Recording World in 1986: “A punter walks into the shop, wants to buy a single – and there’s half a dozen mixes of it! It’s a pain in the ar*e!”.

Comedian Lenny Henry summed things up best in a sketch where he entered a record shop to buy a single and was then offered a plethora of versions by the assistant…“I JUST WANT THE VERSION THEY GOT RIGHT!” he exclaimed. In another stand-up routine, he commented that a 12 inch single could last longer than a marriage. Indeed in Frankie’s case, it did!! 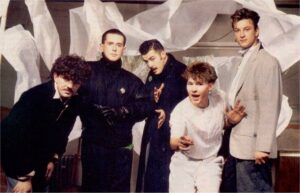 The original 16 minute ‘Sex Mix’ 12 inch of ‘Relax’ drew a large number of complaints because it bore little resemblance to the 7 inch radio mix. For the record, it happened to be self-indulgent rubbish as well!

Thankfully, this is missing from ‘Frankie Said’, subtitled ‘The Very Best Of FRANKIE GOES TO HOLLYWOOD’. It has all the singles, some B-sides and a couple of 12 inch versions.

Those first singles and B-side covers ‘Relax’, ‘Ferry Cross The Mersey’, ‘Two Tribes’, ‘War’, ‘The Power Of Love’ and ‘Welcome To The Pleasuredome’ need no introduction and are magnificent in all their Trevor Horn produced glory, although it must be pointed out that on ‘Frankie Said’, ‘Relax’ and ‘Two Tribes’ are represented by alternate single versions. But for those two self-composed songs alone in their familiar hit form, FRANKIE GOES TO HOLLYWOOD’s place in history has been cemented in musical history, regardless of all the hype, radio bannings, controversies and marketing manoeuvres. But it kind of went wrong after that!

The group were lampooned by pop pranksters HEE BEE GEE BEES with the parody ‘When Two Songs (Sound The Same)’ under the moniker FRANKIE GO TO THE BANK while like many pop bands such as THE MONKEES, BAY CITY ROLLERS, SWEET etc, the Frankie musicians themselves largely didn’t play on the records. 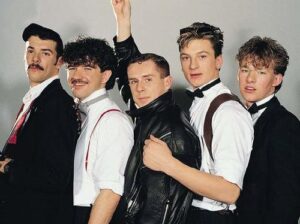 However in 1986, when Stephen J Lipson was commissioned to produce their second and last album ‘Liverpool’ in Trevor Horn’s absence, he made Peter Gill, Mark O’Toole and Brian Nash play on it “for their own good”.

So there’s an irony in ‘Frankie Said’ having a live version of ‘Born To Run’! But here’s another one for the record… the studio cut from the ‘Welcome To The Pleasure Dome’ double opus is better than Springsteen’s original!!

‘Liverpool’ was recorded on a tax exile year out in Ireland, Ibiza, Holland and The Channel Islands… it was something the band would not need to do again! The first single from the sessions ‘Rage Hard’ was comparatively disappointing with its lack of a catchy chorus although the follow-up ‘Warriors Of The Wasteland’ had the swagger of ‘Two Tribes’ and the punch to be up there with their early singles. Unfortunately, the version included is a ploddy as live recording which unsurprisingly sounds like it’s being played by a slightly polished up pub rock combo!

The final single off the album ‘Watching The Wildlife’ resembled an IT BITES cast-off and then BANG, that was it! Despite an extensive European arena tour, fist fights and litigation between band members and the ZTT label spelt the end. Singer Holly Johnson eventually recovered from a bitter court case to deliver the hits ‘Love Train’ and the wonderful ‘Americanos’ from the album ‘Blast’ in 1989, but for FRANKIE GOES TO HOLLYWOOD, the adventure was now over. They were on their way home…

But for those who have never bought a FRANKIE GOES TO HOLLYWOOD compilation in their life, ‘Frankie Said’ is a good way to renew your Scouse Honour. For everyone else, the one-time Trevor Horn cohorts ABC put it best on the sleeve of their 12 inch of ‘That Was Then But This Is Now’: “…the choice is yours”. However, the Anne Dudley ‘…Best Listened To By Lovers’ orchestral rendition of ‘The Power Of Love’ which concludes this collection is beauty to be savoured.

is released by Salvo/Union Square on 5th November 2012

Posted in Reviews Tagged with Frankie Goes To HollywoodZTT