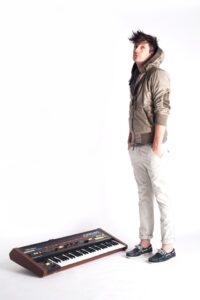 The Kid himself Nathan Cooper said: “The video has been a labour of love! It features a Commodore Pet, 2 reel-to-reels, the Prophet 5 and an old 6 foot tall patch bay I built!!!!”

Imagine if HOWARD JONES and NIK KERSHAW had an illicit affair in the dressing room of Top Of The Pops back in 1984? KID KASIO would be their resultant love child!

From his debut album ‘Kasiotone’, it also features the great LA ROUX meets RYUICHI SAKAMOTO ballad ‘I Miss You’ and the optimistic synthpop tunes ‘Not For Turning’ and ‘Living My Life’. Plus as if to prove his musical parentage, there’s even a cover of NIK KERSHAW’s ‘Dark Glasses’.

‘Kasiotone’ is available via Amazon and iTunes

CLAUDIA BRÜCKEN The Lost Are Found