April 5, 2021 / electricityclub / Comments Off on GIRL ONE & THE GREASE GUNS A Figure In The Underpass 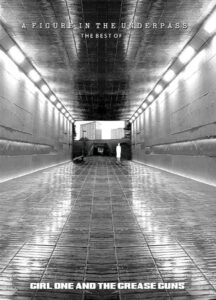 Formed in late 2012, the mysterious GIRL ONE & THE GREASE GUNS released seven singles, one full length long player ‘Night Of The Living Electrical Appliances’ and a farewell mini-album ‘Transmissions From The Glass Factory’.

But with no band photographs or live appearances, before any pesky kids could unmask their true identities, GIRL ONE & THE GREASE GUNS disbanded.

The new “Best Of” album ‘A Figure In The Underpass’ captures their intrigue in one handy place.

Opening the collection with 2015’s ‘The Shatterproof Man’, despite the John Foxx-esque title and the detuned synth backing, it still sparkles with pretty melodies like early OMD meeting THE RONETTES while following it on the compilation is the enjoyably squiggly unorthodox pop of ‘(It’s A) Warning Sign (Blue Lights)’.

Ultra-violence and JG Ballard were among the recurring dystopian influences in GIRL ONE & THE GREASE GUNS, but the Farfisa-tinged ‘Hitting The Brick Wall’ managed to be quite bouncy despite its title, although ‘The Voices In The Walls’ captured the spectre of Big Brother and the surveillance society.

One of the band’s final recordings ‘Destination Yesterday’ exploited metallic sequencers, detuned synths and those characteristic nonchalant female vocals that gave the anonymous combo cult appeal and with that in mind, the feisty ‘Suburban Robot’ recalls the magic of early ‘604’ era LADYTRON while amusingly, ‘Bashed, Beaten And Broken (Trip The Switch)’ with its South Yorkshire lass twang sounds like THE HUMAN LEAGUE during their Fast Product era fronted by Susanne Sulley!

When GIRL ONE & THE GREASE GUNS occasionally laid off the aural harshness to reveal a softer side, they could be eerily magical. With its beautiful atmospheric quality smothered in icy synth strings and grainy vox samples, the marvellous ‘No Longer Spellbound’ from 2014 imagined if ‘Twins Peaks’ set was in The Lake District.

Their most powerfully overt electronic pop single came with the sweet but sinister ‘Good Morning, Mr X’ as Sissy Space Echo, Warren Betamax, Charles Bronson Burner and Bruce LeeFax bid adieu in 2019. Meanwhile, ‘Forever Seems So Long’ was almost wasted as its B-side, featuring the sort of mighty swooping detuned synths that would make OMD proud. But around that same period, another single ‘Turn It Around Again’ transported the Wall Of Sound into the cold greyness of Northern England.

Reflecting being recorded in “a freezing cold structure in the middle of a timber yard”, 2013’s ‘Jessica 6’ remains GIRL ONE & THE GREASE GUNS’ greatest moment; a tribute to the cult Sci-Fi favourite ‘Logan’s Run’ and the alluring character played by Jenny Agutter, the reverbed post-punk cacophony laced with icy Yamaha string machine still comes over like THE PIPETTES fronting an OMD assisted JOY DIVISION.

Despite being capable of melody, GIRL ONE & THE GREASE GUNS couldn’t help their progressive mechanical desolation and their third single ‘(Here Come) The Catastrophe Machines’ is basically ‘Nag Nag Nag’ but more violent! As ‘(She Sits) In The Freezer’ captures further winter discontentment, ‘A Figure In The Underpass’ closes with the dysfunctional indie synthpop of ‘Driving Without Headlights (Once Again)’.

Superseding and improving on the earlier compilation ‘The Strange Little Lies That Humans Draw In the Dust’, ‘A Figure In The Underpass’ gathers twenty tracks on the CD. But although the download offers another five, a number of notable tracks are omitted with the superb cover of THE BLANCHE HUDSON WEEKEND’s ‘Noise & Fury’ being among the more immediate GIRL ONE & THE GREASE GUNS recordings that are missed.

With a manifesto to “thrive on causing confusion with a mixture of pure synthpop and more experimental electronic sounds”, GIRL ONE & THE GREASE GUNS certainly had fun with their DIY noise fest and they leave this enjoyable compilation which acts as an unintentional soundtrack for the frosty climate of the strange times that the world finds itself in.

‘A Figure In The Underpass’ is released as a CD and download by Next Phase : Normal Records, available direct from https://girloneandthegreaseguns.bandcamp.com/album/a-figure-in-the-underpass

Posted in Reviews Tagged with Girl One & The Grease Guns