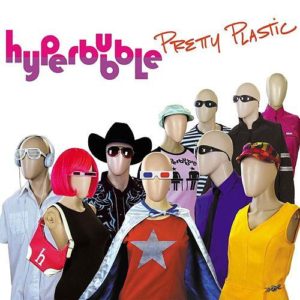 It’s a compendium of their work previously scattered across vinyl, EPs and compilations issued on labels in the UK, America, Germany, Italy and Japan.

As well as gathering rarities, ‘Pretty Plastic’ also includes slight variations on some of their best known songs that have gained the duo a worldwide cult audience.

Beginning with ‘Jouet Pop’ aka ‘Girl Boy Pop Toy’, this is the couple’s appealing musical mission statement as the “synthesizer couple” which often opens their live set and acted as one of the key tracks on their third album ‘Candy Apple Daydreams’ in 2010.

From that very album, an Extended Remix of the title track acts as enjoyable treat, featuring a more dance focussed rhythm construction while maintaining the song’s quirky B-52s catchiness. The longer middle section even throws in a robotised HYPERBUBBLE biography.

Featuring in a Nightmare Mix, the frantic and brilliant ‘Chop Shop Cop’ amusingly asks “you wouldn’t steal a car, you wouldn’t steal a DVD, you wouldn’t download load an illegal MP3, so why did you steal my heart?”, while the sturdy Valentino Mix of ‘Non Biodegradable Hazardous Waste Disposal’ adds another catchy but different focal point.

Having shown their knack for synth instrumentals on 2016’s ‘Music To Color By’, HYPERBUBBLE prove they’re always had it with tracks like 2014’s ‘Son of Sky Smasher’ and ‘Disgow Glasgow’ from 2009.

And if you’ve ever wanted to hear what ‘Money’ might sound like as mad electronic remix, then the 60 second ‘Party On Jupiter’ does the trick, while ‘(She’s So) Technical’ reveals a moodier side to the couple. The driving electronics of ‘Kinky’ provide some spice to proceedings before the octave thrust of ‘Pop Star’ amusingly captures wanabee culture with a spacey twist.

‘Welcome to Infinity’ is Vince Clarke-styled sequenced magic with shades of Donna Summer thrown in and appropriately, the 2004 vintage ‘Disco Invasion’ gives an alien take on Giorgio Moroder.

Things perhaps go off track with the Neuromix of ‘Synesthesia’ which is really for fans only but ‘Another Ride’ puts things back on track before an extended take on ‘Girl Boy Pop Toy’ nicely bookends the collection.

At 22 tracks, ‘Pretty Plastic’ is excellent value and achieves that difficult feat of appealing to loyal followers and acting as a representative introduction to those who are curious about the June Carter and Johnny Cash of synthpop.