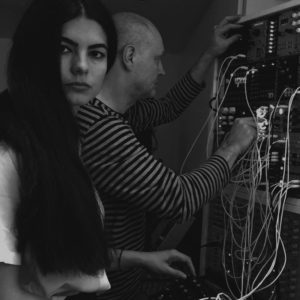 Inspired by Jean Paul Sartre and expressing the need to be isolated, moving away from other people because they are the cause of mental and emotional pain, FRAGILE SELF are a minimal electronic duo aiming to create dark pop music to communicate the detachment often felt within the human condition.

Like a musical thesis on psychotherapy, the subject matters of their songs range from narcissism to Gestalt therapy.

Comprising of Anil Aykan and Jonathan Barnbrook who each have graphic design backgrounds, their ethos sees the music and visuals work in tandem.

Inspired by the 1968 Ingmar Bergman 1968 film ‘Hour Of The Wolf’, their just unveiled track of the same name is enigmatic, brooding and ritualistic like the recent ‘Pastoral’ work of GAZELLE TWIN whose artwork incidentally involved Barnbrook, best known for his visual presentations of icons such as David Bowie and John Foxx.

He told ELECTRICITYCLUB.CO.UK: “The idea behind the lyric video was to see if it were possible not to have the words just coming up along with the singing but to see if we could keep the all of the words on the screen all of the time.”

Exploring “The hour between night and dawn… when most people die, sleep is deepest, nightmares are most real”, ‘Hour Of The Wolf’ exploits the fine art of the modern modular synthesizer with Noise Engineering’s Basimilus Iteritas Alter, Hexinverter drum modules and the Befaco BF22 filter being the main modules used.

With their forthcoming eponymous album mixed by Erland Cooper whose credits have included Hannah Peel, FRAGILE SELF are cerebrally out there, exploring sonic clusters for the mind. Live performances are planned.

‘Hour Of The Wolf’ is from the modular synthesizer compilation album ‘Modularism 2: Noises Off’ released by Law & Auder Records and available now on all major streaming platforms, further information at https://www.pledgemusic.com/projects/modularism-2-noises-off