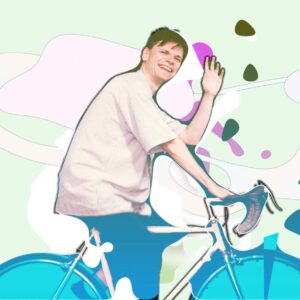 Compared on occasion to an electro Ian Dury and an urban Jona Lewie, Cambridge-based vocalist, producer and songwriter Theo Sayers was first spotted by ELECTRICITYCLUB.CO.UK opening for KNIGHT$ at his 2019 Halloween gig.

He released ‘My Nose Is A Little Runny’, a SLEAFORD MODS styled musical response to the worldwide lockdown crisis that concluded “sleazes cause diseases” back in March.

‘Impatient’ charmingly comes over like Edwyn Collins fronting a lo-fi KRAFTWERK and in an enjoyable video directed by Rhys Votano, Sayers plays himself and a female alter-ego Dora. Inspired by an unfortunate cycling accident that he once had, he told ELECTRICITYCLUB.CO.UK: “The music video is a fun and colourful representation of the song’s retro synthpop flavours.”