November 22, 2012 / electricityclub / Comments Off on JOHN FOXX & THE MATHS Evidence 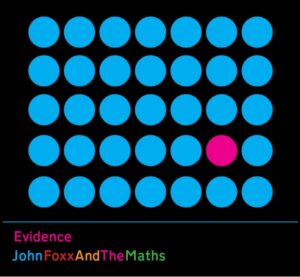 JOHN FOXX & THE MATHS have released their third album in 18 months entitled ‘Evidence’.

The 15 tracks include collaborations with Matthew Dear on a version of ‘Talk’ which previously appeared on ‘The Shape Of Things’, US duo XENO & OAKLANDER on ‘That Sudden Switch’ and TARA BUSCH with her own ‘I Speak Machine’ mix of ‘Talk’.

Dubwisely surreal, the title track’s collaboration with North American post-apocalyptic trio THE SOFT MOON sees many of the starker, dystopian flavours that Foxx is best known for.

Following the enjoyable flirtation with synthpop on JOHN FOXX & THE MATHS’ debut album ‘Interplay’, this is much more post-punk psychedelia like Gary Numan meeting Syd Barrett!

The album sees available for the first time in physical format, Foxx and Benge’s brilliant minimal electro cover of PINK FLOYD’s ‘Have A Cigar’ (where the infamous “which one’s Pink?” line is changed to “which one’s Maths?”) while also included are Brighton songstress GAZELLE TWIN’s chilling remix of ‘A Falling Star’ and JOHN FOXX & THE MATHS’ reworking of her wonderfully emotive but unsettling single ‘Changelings’.

is released by Metamatic Records

The ‘Analogue Circuit: Live At The Roundhouse’ DVD + CD set recorded at 2010’s Short Circuit Festival is also out now