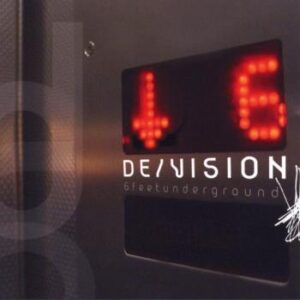 Forming in 1988, German duo DE/VISION keep themselves busy with touring in between albums and writing new material.

After twelve studio albums plus re-hashed releases, the wealth of their back catalogue is vast and loved in their native Germany, the rest of Europe, America and South America alike.

Rare visitors to England, yet constantly touring their own land with massive success, DE/VISION are unique and uncommon.

Their live shows are as uncomplicated as one could ever imagine, with Thomas Adam tucked away behind a keyboard and Steffen Keth performing his songs with unparalleled modesty and purity. A few years have passed since the release of ‘Six Feet Underground’, which was disclosed in 2004 to the thirsty DE/VISION fans, and proved to be one of their most loved albums, having followed gems like ‘Void’, the controversial ‘Two’ and the back-to-electronica ‘Devolution’.

The title itself suggests a death theme which prevails throughout the listening experience, creating a gloomy and forlorn mood, exquisitely depicted in the twelve tracks on this record. ‘I’m Not Enough’ opens this sombre collection of tunes, with lyrics such as “Rock me to sleep, and bury me deep” and “I’m living a borrowed time, I have passed my prime”, which perfectly characterise the aura of “dying over and over”. It could be a flag tune for anyone, who has ever suffered from depressive moods and suicidal tendencies.

The magnificent ‘I’m Not Dreaming Of You’ has an upbeat tempo, perfect for those fantastic live dances Steffen likes to perform on stage; the notion of downheartedness prevails however. “I can’t go on denying the part of me is dying”; the superbness of such simple lyric with so much meaning is astounding. Excellent synth layering over the cheerlessness of Keth’s voice adds to the character of this song and makes it an atmospheric track of the future.

‘Unputdownable’ gives a little hope in the desperate existence, “I’m filled with love from far above… I found the light in the dead of night… I’m unputdownable”. Emotion filled vocals by Steffen Keth intertwined over clever synth lines hit the spot perfectly, leading to the next track, which is ‘Turn Me On’. A drum ‘n’ bass opening leads into an explosion of electronica, the mood lifted and skilfully brought down again, yo-yoing over the imagined misfortunes and flickers of hope in the, otherwise, melancholic existence.

The daunting and blue title track rolls in with a “lifeless, yet alive and eager to live” line, introducing the continuation of the death inspired notion, mournful vocals painting the picture of despair and bleakness. The words “Wherever I turn, my road seems to go nowhere, six feet underground, fated to fail and damaged beyond repair”, desperately cry out for resolution, dissolution and the end. In the world of other depressive, despairing songs, these lyrics mark the line of no return, familiar to so many of those crippled by the, ever so growing, social disease. The astounding voice of Steffen Keth only adds to the dejection atmosphere, “I’m drowning, tired”, bearing the familiarity to anyone, who ever experienced saddened moods; truly a signature track for this eloquently written album.

A song that the band still choose to play during their live gigs, the simplistic ‘Aimee’ is truly outstanding. A little glimmer of better times when ‘Unversed in Love’; “you make me feel that I am special” poses a hopeful feeling that after all, things could be brighter. The passion theme is continued with ‘Right On Time’, where “my love will guide you”.

Vocodered vocals and an uptempo beat, make this a unique dance track. The mood is consistent with the next tune, ‘Take Me Over’, where “my world’s on fire”; excellently executed synth lines over clever basslines could induce a trance indeed. A trance, that, sadly, could not last, as the following, ‘You Are The One’, melancholically strolls in. “I am barely hanging on” Steffen says, “I was born to roam the night”, indicates yet again, the pointlessness of one’s existence, even though “you are the one”. A heavy- hearted anthem for the dispirited, only understood by the crestfallen and dejected. 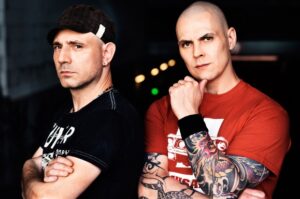 A ray of light brightens over the next track, ‘Beside You’, which is musically a more cheerful tune, not so much lyrically though as “I go to meet my fate”, “insignificance, non-existence”, “I feel about there’s no way out” demonstrate. The instrumental ‘Klangmonaut’ sounds positive and, as if there’s hope after all, beautifully painted story of optimism and the prospect of promise for better times to come. No chance though… ‘Take Me To Heaven’, the song closing the album, cries out for the conclusion.

A love theme intermixed with death, “I’m feeling pain and pleasure I have ever known”, and begging to “take me to heaven”, leaves the listener in irreparable state, where all is lost, there’s no hope and living is not worthwhile.

People said DEPECHE MODE was depressing music?! After listening to ‘Six Feet Underground’, few would say that DE/VISION are too. And those people could not get it any more wrong. Dying is a vital part of existence, why put a stigma on it? Why not embrace the fact, that life is not just about the happy-go-lucky insignificant measures to stay on top; there are dark places in everyone’s minds that surface at times and have to be addressed. This album is quintessentially about that; and to date, the author’s firm favourite.

DE/VISION produced a wealth of releases and have since introduced such gems as ‘Noob’ and ‘Popgefahr’; ‘6 Feet Underground’ however, firmly marks the gloomy mood of failure, inadequacy and lost hope, we all feel at times. No shame…