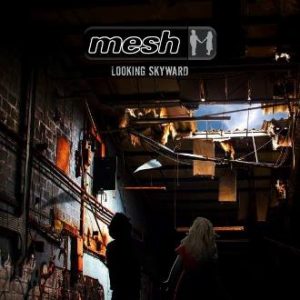 Bristol’s finest MESH, whose success with their last album ‘Automation Baby’ took even Rich Silverthorn and Mark Hockings by surprise, found it challenging to start working on the new material.

If the only way to match their previous successes was to explore different writing techniques, use new technology and re-employ the German master of electronica Olaf Wollschläger as the producer, then the duo certainly did their homework with the new opus ‘Looking Skyward’. Wollschläger, who has also produced BEBORN BETON, SEABOUND, YELLO and IN STRICT CONFIDENCE, is a dab hand at understanding what MESH try to achieve.

Rich Silverthorn states that “Olaf has a natural talent of tiding up our productions and spending a ridiculous amount of time perfecting them without changing the overall feel and mood”. The mutual admiration for each other’s work shines through the newest outing. The ideas have  been born out of old school sampling and make a tremendous difference to the flow of the finished long player.

Just like the vintage DEPECHE MODE albums, which were recorded with the use of unusual sampled noises to enhance the listening experience and bring that ‘one of the kind’ texture to the songs, MESH bought a couple of digital hand-held recorders and went off to capture everyday noises and atmospheres. “It’s the imperfections that make it interesting”, says Silverthorn, who would rather create a unique sound than use plugins. 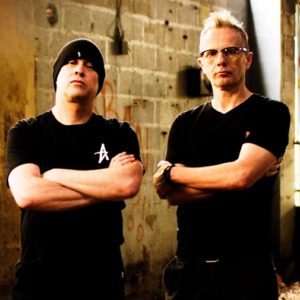 The album is heralded by the powerful single ‘Kill Your Darlings’, which involves the customary catchy hooks and exquisite riffs, being MESH in a can.

The strong lyrical content, together with the loudness, hardness and exuberance, sparkle from this “real smack in the face for a real comeback”.

The opening ‘My Protector’ (not to be confused with FRAGMENTE’s ‘My Defender’, even though displaying the similar lyrical content) eases the listener in with gentle electronica laced with multiple layers and rawer sounding composition.

The anthemic qualities of neo-club tracks such as ‘The Last One Standing’ or the exceptionally masterful ‘Two +1’ hit hard. Meanwhile, ‘The Ride’ is off-beat and messy in an organised way; its unexpected shifts and turns make this album incredible, and yes, the sample of banging on metal parking barrier is included!

The fast notion is punctuated with the inclusion of several slower paced tracks like the ominous sounding instrumental ‘Iris’, ‘Before This World Ends’ (Silverthorn’s favourite with its palpable DM references) and ‘Tactile’ which acts as a full on, goose-bump inducing electronic ballad, exhibiting a musical canvas studded with quirky synth additions of a Virus TI.

‘The Traps We Made’ dabbles with dub step, a notion previously used on ‘Automation Baby’, while ‘There Must Be A Way’ floats the vocal manipulation on Cubase. Meanwhile ‘Runway’ expresses an optimistic outlook on life with a retrospective feel, in stark comparison with lyrically negative The Fixer’. The closing ‘Once Surrounded’ wraps the collection up with a heavier guitar sound and that recognisable MESH synth, unlaboured and heavy, but in no way simplistic. 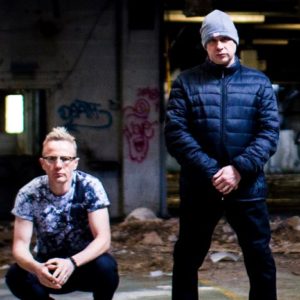 Silverthorn advises the usage of headphones for “listening out of those hours of work manipulating samples into musical parts”. The intricacy of the production is, indeed, stunning. The multiple textures meander through the layers of the work, representing the intensity of feelings and the quality of Wollschläger’s mastering.

‘Looking Skyward’ is a magical journey into electronic soundscapes, taken to the next level.

MESH never disappoint and the latest opus is a worthy addition to their vast back catalogue, and, unlike other weathered electronic acts, they only get better.

is released on 26th August 2016 in a variety of formats by Dependent Records, available from http://en.dependent.de/mesh-looking-skyward.html 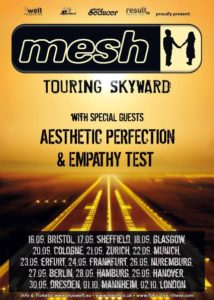