March 2, 2015 / electricityclub / Comments Off on NODE Live at The Royal College of Music 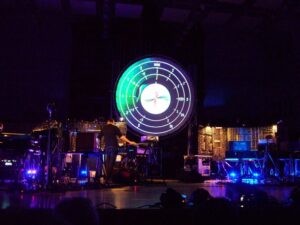 Advancements in modern digital technology are a fantastic thing, or are they?

Whilst the debate still continues to rage about the pros and cons of vinyl versus digital music products, tonight brought up a telling parable as to whether the traditional methods of carrying out certain tasks should be tampered with.

A typical pre-gig meal turned into a farce when in an un-named South Kensington restaurant, instead of bringing the usual paper menus, the waiter brought a single iPad and attempted to explain the convoluted digital method of ordering by scrolling through multiple menus and then looked at us as if we were complete Luddites when we asked to order normally! A brief verbal scuffle and we were out the door and on our way to The Royal College of Music; a stones throw from The Royal Albert Hall and a refreshing change from many of the usual London venues. 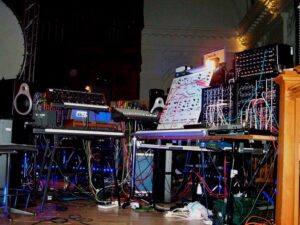 After walking into the Amaryllis Fleming Concert Hall part of the venue, the attendees were confronted with the quite breathtaking sight of a large stage filled to the brim with stacks of vintage and current analogue modular synthesizers plus unusually for a technology-based gig, not an iPad in sight and just a singular laptop.

For those unfamiliar with NODE and if you missed TEC’s interview with three quarters of the line-up last June, they are a producer super group comprising Flood (DEPECHE MODE / NINE INCH NAILS / PJ HARVEY), Ed Buller (WHITE LIES / SUEDE / PULP), Dave Bessell and Mel Wesson. The group first gained some notoriety when performing a gig at Paddington railway station in 1995 during the commuter rush hour to support their debut album and towards the end of last year, released their long awaited second release of synthetic soundscapes ‘Node 2’ on Ian Boddy’s DiN imprint. 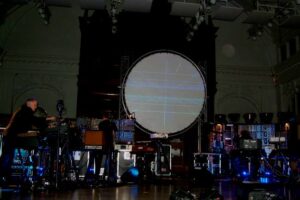 The presence of so many vintage synthesizers was probably enough visual stimulation for most of the audience, but in addition centre-stage was a circular PINK FLOYD-style screen onto which was projected a few subtle images / animations and live feeds of the performers on stage, plus some twinkling Christmas-style lights around Flood’s modular set-up added to the overall effect. Additionally, some effective uplighting under much of the equipment really evoked the halcyon days of early KRAFTWERK and TANGERINE DREAM performances.

The band started with an extended version of ‘Shikansen East’ from ‘Node 2’, the shifting chords eventually leading into the track’s hypnotic step sequencer patterns before coming back full circle to the intro passage again. The structure of the gig lovingly followed the format of a classic KLAUS SCHULZE double album… four 20 minute pieces, with a midpoint break to allow those present (including DURAN DURAN’s Nick Rhodes) to crowd around the front of the stage to survey the gear on stage. 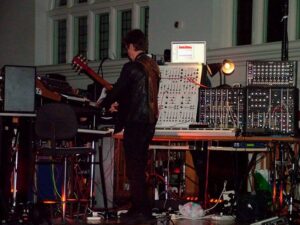 What was refreshing was the improvisational and unpredictable nature of the show, occasionally sounds poked through the mix that were probably unintended, but all added to the experience of watching music that wasn’t pre-programmed and overtly computer generated.

Each performer had their own custom modular set-up plus additional synths including classic PPG, Oberheim, EMS, Moog and Sequential Circuits gear. Right of stage, Dave Bessell had a guitar strapped on for most of the gig, but instead of going for the Edgar Froese solo-style approach, he used it to add more subtle textures to the primarily electronic sounds on offer tonight. 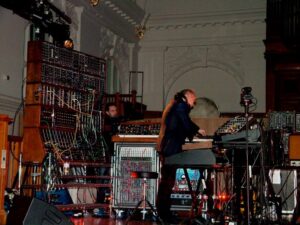 To the right of the stage, Mel Wesson’s area featured a wonderful and very highly stacked Moog Modular. More centrally set-up were Flood and Ed Buller, each with their own preferred choice of synthesizers, the former having an EMS VCS3 and a Roland VP330 vocoder amongst his sonic arsenal.

The evening’s set climaxed in what was the most Berlin School-style track of the night, intricate step sequenced patterns filtering in and out in a hypnotic wash of sound before winding down and fading out to loud applause. The band took their bows at the front of the stage before coming back out for another curtain call, there was no encore, but the audience didn’t seem too concerned, having been treated to a night of electronic music that was probably the nearest you would get these days to seeing a vintage TANGERINE DREAM style analogue synth set. 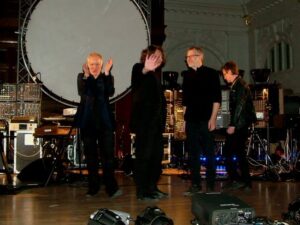 A valid point could be raised as to whether this style of music is the only type that can be made with this equipment, and whether a more forward thinking, more innovative approach could be taken in places. But then again, if you went to see Eric Clapton or Brian May, you wouldn’t expect either of them to feed their trusty guitar through a Kaoss pad or glitch pedal.

It could also be argued that Mark Shreeve’s REDSHIFT project took more risks and developed this sound to a much higher level (especially from a live perspective) with similar equipment, but because they are now on hiatus, the chances of seeing a set-up anything like this nowadays is extremely limited.

Modern digital technology is often a brilliant thing, but sometimes there’s a lot to be said for an analogue approach and tonight’s overall experience certainly reinforced that. If NODE ever get to do another live performance, beg, steal or borrow a ticket, you won’t be disappointed.

‘Node’ and ‘Node2’ are released by DiN and available from http://www.din.org.uk/din/

IF IT WAS MY BAND…