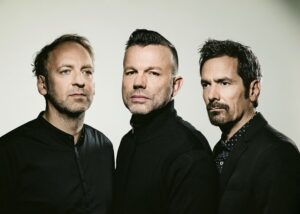 CAMOUFLAGE, the German veterans of electronica, are back with a superb album ‘Greyscale’ this year, a true synth extravaganza of everything that’s great about continental electronic music.

‘Greyscale’ is the eighth studio album by the trio of Marcus Meyn, Heiko Maile and Oliver Kreyssig from Bietigheim-Bissingen.

With the first single ‘Shine’ brightly opening the album and its radiant video depicting Marcus Meyn illuminated by the sparkliest of lights, the listeners are in for a rare treat, as they are invited to join the journey that is this album.

Named after a song by YELLOW MAGIC ORCHESTRA, no two CAMOUFLAGE records are the same or monotonous, from the brilliant 1988 debut ‘Voices & Images’ and their comeback ‘Sensor’ in 2003, through to the current gem, which is “shining” as brightly as the first single recommends. Beginning with the beat of a TR808, Marcus Meyn begins with the lines: “This is the story, we should shout out loud, tell everybody, that no-one lives without – Shine Shine Shine within your mind”.

ELECTRICITYCLUB.CO.UK’s very own Chi Ming Lai was responsible for liner notes of ‘The Singles’ compilation which was released in 2014 by Universal Music. So to complete the circle, CAMOUFLAGE’s lead singer Marcus Meyn spoke about the old and the new. 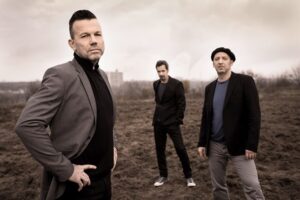 Your new album ‘Grayscale’ is out soon. After a successful career of many years starting with ‘Voices & Images’ in 1988, what keeps you motivated and creative?

We love music and we love to make music – it’s a drug. We are still good friends and the way we work together functions like gearwheels. We can’t imagine to live without writing songs or playing shows.

You celebrated your 30th Anniversary as a band with live show in Dresden with a number of special guests. What are your memories of that event?

The event was a fantastic happening we’ll never forget. It was sometimes like a déja vue and when you closed your eyes you were right back in the time, of the original recordings or shows – you know, we had the people on stage with whom we performed years ago and you turn around and see them performing – can you imagine how strange this was for us? And the duets were so much fun – especially for me, the performance with Peter Heppner from WOLFSHEIM was a dream come true.

On the new ‘Greyscale’ album, you feature the amazing Peter Heppner on ‘Count On Me’, how did that collaboration come about?

It was a long-time dream of mine to perform the song ‘That Smiling Face’ together with Peter, because I always thought that his voice with this sadness inside would fit perfectly together. So when we celebrated our 30th anniversary in Dresden, we asked him, if he would like to join the show and sing this song with us – and he did. This was so fantastic – for both of us that we were thinking about producing a new song together for the upcoming album and when I sent him ‘Count On Me’, he immediately said YES, so we recorded the song for the new album.

Being seasoned musicians, do you find live performances easier now, especially with the technology available?

For me as a singer, I always felt uncomfortable with the sound on stage, that’s why I didn’t like to play concerts in the early years. Since the end of the 90s, we play with in-ear monitoring and this changed everything for me. Nowadays I love to perform and it’s getting more and more crazy – I feel free and act free.

During the 90s, the German alternative music scene flourished with acts like WOLFSHEIM, DE/VISION, AND ONE, ALPHAVILLE and FURY & THE SLAUGHTERHOUSE. Was there any rivalry between the bands, or did you consider them as brothers-in-arms?

To be honest, we never thought about other bands – we had enough to do with ourselves. I don’t know what these bands thought or did – I just know, that we acted like a snail and we ran ourselves until we stopped the band for 2 years in 1996. 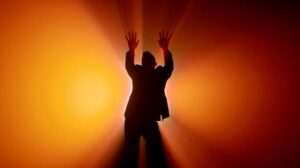 You sing in English and only very rarely in German? Have you ever thought about combining both like WOLFSHEIM or AND ONE?

No, we never wanted to expand the rare excursions. If we would have more ideas for lyrics and songs, then maybe, but at the moment we have no plans for that.

You had an American Billboard Hot 100 hit with ‘The Great Commandment’, which also featured at No1 on the US Dance Chart; as mentioned, you sing in English but why do you think the UK was never took an interest in CAMOUFLAGE?

I really don’t know – to be honest! It would be an honour for us, to get the chance to play there, but until today we never had a chance to do so.

The UK electronic music scene has given birth to the likes of MESH and more recently VILE ELECTRODES, yet we struggle with acceptance of the genre despite the pioneering ‘Synth Britannia’ era which gave rise to GARY NUMAN, THE HUMAN LEAGUE, OMD, ULTRAVOX and DEPECHE MODE. Why do you think Germany is different and more open to electronic music?

The German music scene also has a long electronic tradition – starting with CAN or KRAFTWERK and it invented Techno, so the fans continue to support this scene – maybe it is inside us, that we like this kind of music, because the fans are growing again, as you can see in the concerts. You could call it dated, but we are quite happy the way it is here!

Your fan base is worldwide, with audiences in South America, most of Europe and the US, do you have a preferred crowd?

Every country has its own crowd and own way to celebrate a good show. But after we played several times in South America, the fans in other countries started to copy the enthusiastic party they saw on YouTube about these shows – it’s really unbelievable – the crowd is singing in between songs, they are celebrating special parts of songs etc. It’s quite funny!

What prompted the choice of ‘Shine’ for the first single?

Right from the beginning we know, that this song MUST be the first single – it was so obvious – if not ‘Shine’, which song would be more obvious to become the first single! The hook line is so catchy and the beat is driving you on – every time when we played the song and the people joined in singing along to the chorus, then we knew, it would be the right decision.

The new album has a beautiful, mellow sound throughout; what’s been the inspiration?

Melancholy is a significant colour of our sound since the beginning, so we knew right from the beginning the sound of the new album will be mellow again, too. We can’t say why this happens all the time, but we feel quite comfortable and at home in it. It is part of our characters. 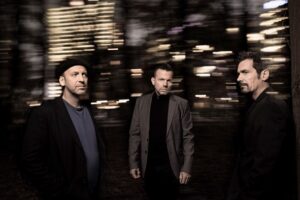 Titles like ‘In The Cloud’, ‘Misery’ and ‘Light Grey’ indicate that this maturity may have been brought on by middle age? How does age sit with being a touring musician?

To be honest, we’re not thinking about age. We know that things are not as easy on stage as they were a few 10 years ago, but we still feel strong, healthy and in a very good shape and mood, to go on stage and play shows.

But are electronic musicians now the new Blues musicians, where that life experience can only enhance the credibility of the work?

You should always be yourself, when you write songs. Life’s about telling the best stories and to have a certain credibility, you need to be real in what you’re doing and what you’re writing about. People are not stupid – they’ll find out, if emotions are giving a real feeling or not.

‘Greyscale’ promises to be a great success; what are your favourite tracks?

My favourite songs as the singer are ‘End Of Words’ and ‘I’ll Find’… at the moment!

Do you prefer the vintage hardware or soft synths? Are there any particular favourite synths that are key to CAMOUFLAGE’s sound?

We’re using both worlds, but we’re still using the old analogue systems from Roland and Korg, as well as other wonderful real synthezisers.

How have your composition and recording processes changed over the years?

Today, it is quite easier to record stuff in a good quality. In the beginning everything was based in a studio, because the technique was huge and not removable. Today, you only need a laptop, a MIDI keyboard and a microphone and you can produce a whole album, wherever you want.

By that time, the record company was spending a fortune of money for an album – these times are over… we don’t have the money to work with names like this at the moment 😉

30 years as a group is a long time, how are you keeping each other sane?

Our basis is friendship. As long as we can act within this, the band will continue. 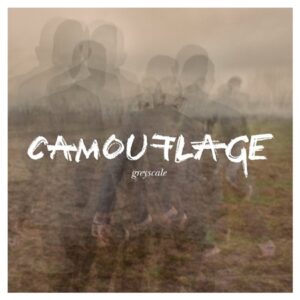 You are touring Europe to promote ‘Greyscale’, do you think you will ever play the UK?

This would be a dream come true – I hope it will happen one day!

What has been your career highlight with regards CAMOUFLAGE, either musical or personal?

Oh – this is something I really can’t name – there were so many unbelievable and beautiful things happening in the last 30 years – positive and negative, that we won’t miss, that it’s not possible to name them!

ELECTRICITYCLUB.CO.UK gives its warmest thanks to CAMOUFLAGE

Additional thanks to Sean Newsham at Mutante PR

is released by Bureau B on 27th March 2015 in CD, vinyland download formats

Posted in Interviews Tagged with CamouflageWolfsheim