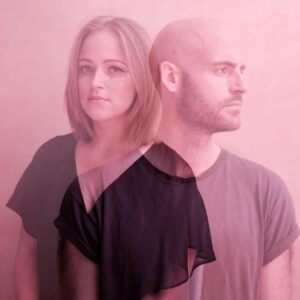 Filmic dreamwave duo POLYCHROME are back with a new single ‘UltraViolet’ that comes with a force of aggression not heard before compared to their 2018 self-titled debut album.

Several songs found favour with TV producers and advertising agencies around the world. But with ‘Ultraviolet’, an overdriven digital rimshot, as used by the likes of Prince in the past, makes a dynamic rhythmic statement. Meanwhile the rich haze of a malfuctioning Yamaha DX7 and understated bass warbles from multi-instrumentalist Olly Price provide the backdrop for the angelic treated vocals of Vicky Harrison.

A blend of ELECTRIC YOUTH, CHROMATICS and CHVRCHES, Vicky Harrison said of ‘UltraViolet’: “It’s quite driving with a faster tempo and I think it leans more towards synthpop, but there was no particular conscious choice. We made a series of electronic vibes and picked what we liked and started sculpting those. We might do that in a few sessions on one song, but the main body is there by the time we get to the end.”

While the computer animated video does feature an abundance of clichéd synthwave imagery including grids, sunsets, palm trees, sports cars and shades of magenta, there is a twist with Harrison’s lips making an eerie appearance…

The dystopian resonance of ‘UltraViolet’ reflects the darkness of a year where many have suffered and lost. It was no different for POLYCHROME and what began as a song about relationship break-up mutated into a narrative comprising of a post-Covid world where that last few people alive on a dying earth struggle to survive and are forced to live in a computer simulation! Despite the subject matter, there is a strange beauty to ‘UltraViolet’.

Olly Price caught Covid hard at the start of the pandemic and its effects still loom; “This Virus is a f*cker…” he said, “So many people have had it way worse than us so this is our tribute to everyone who has had a crap year”

‘UltraViolet’ is released by Hilo Lohi records, available on the usual online platforms and direct from https://soundofpolychrome.bandcamp.com/