June 7, 2010 / electricityclub / Comments Off on Introducing ROCKETS IN A COMA 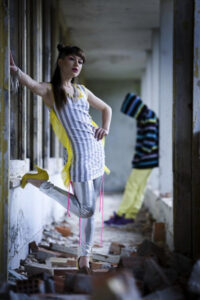 ELECTRICITYCLUB.CO.UK are pleased to introduce ROCKETS IN A COMA whose album ‘Square Strawberries’ is released by the wonderful Undo Records, home of Greek synth sensations MARSHEAUX.

The modern bombastic elektrockers are fronted by the striking Elektra with the publicity shy Java Kid on synths, guitars and programming. Elektra first came to prominence as a guest vocalist on the 2008 album ‘Mistakes Are Good’ by MARSHEAUX’s production team FOTONOVELA.

With Elektra’s feisty vocal style and Java Kid’s eclectic production style, they deliver a mutant strain of electro rock disco with nods towards MIKRO, THE CURE and GOLDFRAPP as showcased by the single ‘Psycholover’.

Here, Elektra kidnaps her hapless male model lover and taunts him with slaps and food before he makes his escape. Yes, they may be ROCKETS IN A COMA but the promo video’s twist actually has an ending of Morrissey-like proportions!

Together, Elektra and Java Kid have creatde a modern bombastic electro-rock album with a very strong influence from today’s state-of-the-art duos as THE TING TINGS and AEROPLANE. Elektra’s haunting vocals promise night full of suprises in a wide big dance field as well as saturdays house parties

‘Square Strawberries’ is released by Undo Records and available now from http://undorecords.bigcartel.com/product/rockets-in-a-coma-square-strawberries-cdun17

Posted in Introducing Tagged with FotonovelaRockets In A ComaUndo Records