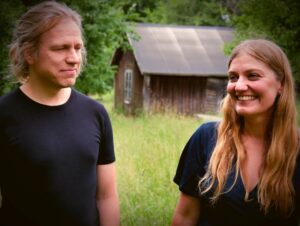 Since releasing their first album ‘Disco Romance’ in 2006, SALLY SHAPIRO have charmed audiences with a brand of melancholic but uplifting electronic pop.

Despite the name, they are actually a Swedish duo comprising of the enigmatic anonymous songstress Sally Shapiro and producer Johan Agebjörn. The albums ‘My Guilty Pleasure’ and ‘Somewhere Else’ followed but then in 2016, SALLY SHAPIRO issued a final single ‘If You Ever Wanna Change Your Mind’ and retired.

Agebjörn had begun a parallel solo career with 2011’s ‘Casablanca Nights’ album featuring LE PRIX, LAKE HEARTBEAT and QUEEN OF HEARTS but his profile was raised again with his work on the Swedish comedy thriller ‘Videoman’ which included ‘Hot Boy’ with Samantha Fox and ‘Love On Ice’ with Italo star Ryan Paris in a duet with Sally. This seeded a reunion and work on a brand new SALLY SHAPIRO album entitled ’Sad Cities’.

Released with great acclaim earlier this year by Italians Do It Better and headed by the single ‘Fading Away’ after a 5 year absence, as with previous albums, a remix variant of ‘Sad Cities’ is now available, featuring reworks by ITALOCONNECTION, BETAMAXX, SUNGLASSES KID, BARK BARK DISCO and IDIB head honcho Johnny Jewel among many.

ELECTRICITYCLUB.CO.UK had the pleasure of talking to Sally Shapiro and Johan Agebjörn about the making of ‘Sad Cities’, its remix collection and other aspects of their career to date…

What some don’t realise is that like GOLDFRAPP, SALLY SHAPIRO is a duo so what inspired you to adopt a “person” as a nom de théâtre rather than a group moniker?

Sally: We were inspired by some Italo disco artists like Valerie Dore or Katy Gray that had a female singer with an English-sounding pseudonym as the project name. So we wanted to do it in the same way. First the idea was to just make a single with that pseudonym, but then it quickly got established so it felt natural to continue to use it! 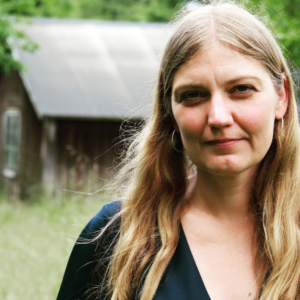 How would describe the creative and recording dynamic of SALLY SHAPIRO, do you sit together or work separately?

Sally: We work pretty much separately. Johan prepares the instrumental and then I go into the studio recording the vocals. Johan is not allowed to be in the studio when I sing. We of course listen to the music together and discuss different ideas and so on.

Are there any particular synths, drum machines and techniques that form the classic SALLY SHAPIRO sound?

Johan: We use a lot of drum sounds from the Simmons, LinnDrum, TR-808 and TR-909 drum machines. I have an old keyboard Yamaha PSR-3500 that has a bass sound and some percussion sounds that I’ve used a lot. The synths have been quite different ones, but a lot of Roland Juno and Jupiter series, or software emulations / samples of those. My favourite reverb is a built-in reverb in Propellerheads Reason.

SALLY SHAPIRO is a quite low key project in the grander scheme of things within the music scene but when did you realise the music was gaining traction and a cult following?

Johan: During 2006 and 2007, the listener count gradually grew, much thanks to Pitchfork who promoted every single we released and put ‘Disco Romance’ in their best-of-the-year chart. Still, it took a few years until we realised that some people actually viewed ‘Disco Romance’ as a cult album and were paying quite a lot of money for the original vinyl pressing. That felt weird.

The new album ‘Sad Cities’ came after a public announcement in 2016 that there would be no more music as SALLY SHAPIRO. But the gap was actually smaller than some acts’ time between albums when they haven’t announced a “retirement”, do you ever regret making the announcement and that perhaps a rest was all that was needed?

Sally: In one way, looking back it was maybe an immature announcement. At the same time, maybe it was a belief in a “total retirement” that was needed to get back the inspiration. We felt absolutely no pressure to make anything new, and maybe that was good for the creativity and the inspiration to record.

Saying that, the most recent album was ‘Somewhere Else’ in 2013 but there was the Johan solo album ‘Casablanca Nights’ before that. How do you look back on that prolific period?

Johan: It was a period with a lot of collaborations with other musicians, especially on ‘Casablanca Nights’, and a lot of DJing around the world, lots of remixing and lots of fun with now-defunct mp3 blogs that posted the music. I recently re-released ‘Casablanca Nights’ in a 22-track edition on Bandcamp, it was fun and nostalgic to revisit all the music from that time. In retrospect, this was the period when synthwave took shape and reached its creative peak, and I’m glad that we got some remixes by some of those artists (MIAMI NIGHTS 1984, MITCH MURDER, ANORAAK, LE MATOS etc) while the genre was still pretty new.

What was the impetus to relaunch SALLY SHAPIRO?

Sally: A few musical ideas that just had to take shape into SALLY SHAPIRO tracks. After that it felt necessary to make a whole album!

How did Italians Do It Better and Johnny Jewel come to be involved in ‘Sad Cities’?

Johan: We had been in contact a few times earlier through the years, I emailed them and asked if Johnny wanted to take part in the production of the album in some form. They replied and were very enthusiastic about the album and after a while it felt logical to release the album on Italians Do It Better. Johnny and I mixed the album together and he helped out with some drum sounds that he recorded from his drum machines. He also remixed ‘Forget About You’ for the remix album.

‘Forget About You’, the opening song on ‘Sad Cities’ began as a collaboration with Ryan Paris, how did that come about?

Johan: We made a collaboration with Ryan Paris in 2018, ‘Love On Ice’ (released as a Johan Agebjörn track with duet guest vocals by Sally and Ryan), for the soundtrack to a Swedish movie called ‘Videoman’. We liked how it turned out, and ‘Forget About You’ was originally also a Sally / Ryan duet released as a Johan Agebjörn single in 2020, but then for the album we re-recorded it as a Sally solo track. Then Johnny Jewel liked it so much that he wanted it to be a single, and also the track that he wanted to remix for the remix album. Actually, there’s also an original instrumental version of the track from 1994 that I recorded on my Yamaha PSR-3500 keyboard at the time, completely without computer. That version is included as a “B-side” on the single!

Johan: Yeah, it was an attempt to recreate the Italo house sound of 1990 (in particular the productions at the time by Gianfranco Bortolotti – Cappella, 49ers etc) with the SALLY SHAPIRO atmosphere. I was a big fan of that sound at the time with the Korg M1 pianos and clattering 909 snares, also pretty similar to what MADONNA (‘Vogue’) and PET SHOP BOYS did at the time. 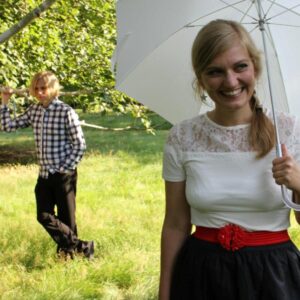 ‘Fading Away’ is an epic dance tune to close, what was its genesis?

Johan: Thank you! I and Mikael Ögren have been working on ambient music and this is actually a result from those sessions, but something that we thought should be more synthwave-ish. So it has both a bit of atmospheric ambient feel and a bit of the relentless 80s disco / synthwave feel.

How do you think ‘Sad Cities’ has been received?

Johan: Really well! We had no idea if people would still be receptive of our music, but we feel really welcomed back.

As with previous SALLY SHAPIRO albums, ‘Sad Cities’ is being released in a remix variant; as someone who has remixed material for others, is there a brief given out to producers and do you have power of veto just in case?

Johan: We usually don’t give any directions, but sometimes they ask and we tell them maybe which of their tracks that have the sound that we think could sound good with Sally. We usually give some feedback during the process though, a lot of the times we ask for the vocals to be louder. Interestingly, that’s also what Johnny often asked me to change on the original versions! I think that when you produce a track you “know” the vocals and want to highlight all different parts in the production, but as someone listening for the first time, it’s important that the vocals stand out and sound clear if it’s pop music, I think.

Unlike many other remix albums, the companion to ‘Sad Cities’ is very listenable with the SUNGLASSES KID remix of ‘Tell Me How’ and ITALOCONNECTION’s take on ‘Believe In Me’ being particularly good. How did you choose the remixers?

Johan: It has to be a producer with some kind of warmth in their sound, but apart from that we like to have varied styles from ambient (Krister Linder) to techno (VONDA7) and a lot of 80s style producers of course. Many times it’s of course producers / remixers that have produced / remixed something that we’ve been impressed with. Some of them are artists we’ve been following for many many years, like Johnny Jewel, Fred Ventura of ITALOCONNECTION or Krister Linder (Swedish ambient / synthpop legend). 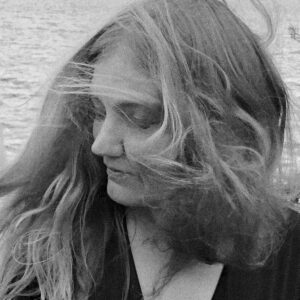 Ben Macklin gives ‘Dulcinea’ a wonderful pop treatment which is quite different from the midtempo synthwave-based original?

BARK BARK DISCO’s remix of ‘Holiday’ is on the album as a sort of extra, what was the thinking behind covering this particular MADONNA song out of so many?

Sally: We made the ‘Holiday’ cover for Italians Do It Better’s MADONNA compilation last summer. It’s one of our favourite MADONNA tracks and suited us really well. But actually, our first choice would have been ‘La Isla Bonita’ but that song was already taken!

Which are your own favourites from the remix version of Sad Cities’?

What would you say have been your proudest moments as SALLY SHAPIRO, be it particular albums, songs or synchronisations?

Johan: Difficult question. Right now we feel a bit proud of ‘Sad Cities’, since the project felt buried just a few years ago.

So what is next either as SALLY SHAPIRO or under different umbrellas or projects?

Johan: It’s too early to speak about new SALLY SHAPIRO releases, but we have a mix for another artist in the loop. I am currently preparing a live ambient / chillwave performance together with Mikael Ögren for a festival in Norway this summer. I and Mikael haven’t performed live together before, so it requires some planning and practising! 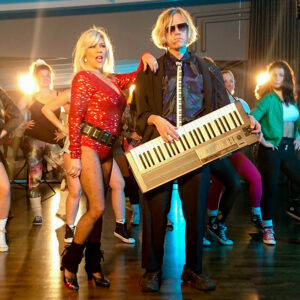 Finally, talking of other projects, what was it like working with Samantha Fox on ‘Hot Boy’ for the ‘Videoman’ soundtrack in 2018?

Johan: It was a surreal experience! I made the track ‘Hot Boy’ together with my frequent co-writer Roger Gunnarsson, and Kristian (the director of ‘Videoman’) suggested that we should send it to Samantha Fox.

I thought there was one chance in a million, but contacted her through her official website and got a reply after a few days from her manager, that she had listened to the song and wanted to sing on it!

She recorded the vocals in the UK, so we never met during the recording process, but she came to Gothenburg for the recording of the music video later. The music video was prepared and filmed by the ‘Videoman’ team at a hotel, it was a fantastic day with a lot of enthusiastic people. Samantha was very joyful and easy to talk to. 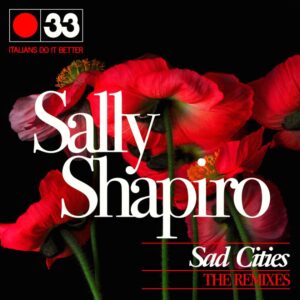 ELECTRICITYCLUB.CO.UK gives its warmest thanks to Sally Shapiro and Johan Agebjörn

‘Sad Cities (The Remixes)’ is released by Italians Do It Better, available from https://sallyshapiro.bandcamp.com/music

Posted in Interviews Tagged with Italians Do It BetterJohan AgebjörnSally Shapiro