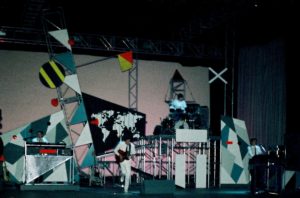 Some of the more purist observers complain about the lack of analogue instruments in the current live shows but Andy McCluskey said recently: “Who says that digital can’t be a beautiful as analogue?”

Even in the pioneering days, OMD were thinking carefully about how best technologically to present themselves in a live context to an audience that was still growing accustomed to electronic based music.

It is well documented that the success of ‘Architecture & Morality’ tour had taken its toll on the band emotionally and functionally. Extended touring had robbed the band of time in their studio The Gramophone Suite to compose new material. As Andy once remarked: “you can’t sit up the back of a tour bus and strum your synthesizer…”. But there was also their reliance on the equipment they took out on the road. Paul Humphreys had his ever faithful Korg Micro-Preset but also the Sequential Circuits Prophet 5 first used on the single version of ‘Messages’ and the subsequent ‘Organisation’ campaign.

In addition, there was the hefty sky blue Elgam Symphony dual action organ and the huge, even more cumbersome Novatron which was an updated version of the Streetly Mellotron M400 that had been during the recording of the album. “We used a Mellotron Mk1 on ‘Architecture & Morality’ but were advised that if we were going on the road to get a Novatron.” said Andy, “The Mk1 had a very bad whine created by the power supply. Streetly told us it was a design fault.” 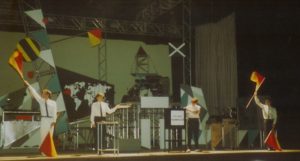 The Mellotron aka Novatron was an electro-mechanical keyboard that played tape loops of sounds such as choirs, strings and brass.

The name Novatron was adopted for instruments produced after 1976 due to a legal blunder which meant the name Mellotron could not be used.

It was the dominant texture of ‘Joan Of Arc (Maid Of Orleans)’ as well as several other tracks on ‘Architecture & Morality’ so was considered a necessity on tour sonically. But it was extremely heavy, weighing in at 55 kg and due to its delicate systems, was vulnerable to malfunction under the heat of stage lights.

But there were also power supply issues as Andy recalled from a gig in Italy: “All the power was from a small generator and every time the lights got really bright on stage, the power supply to equipment reduced making the Novatron flywheel slow down so the notes went very flat. Once our lighting guy realised the problem, we did the rest of the show with reduced lights to keep the Novatron in tune.” 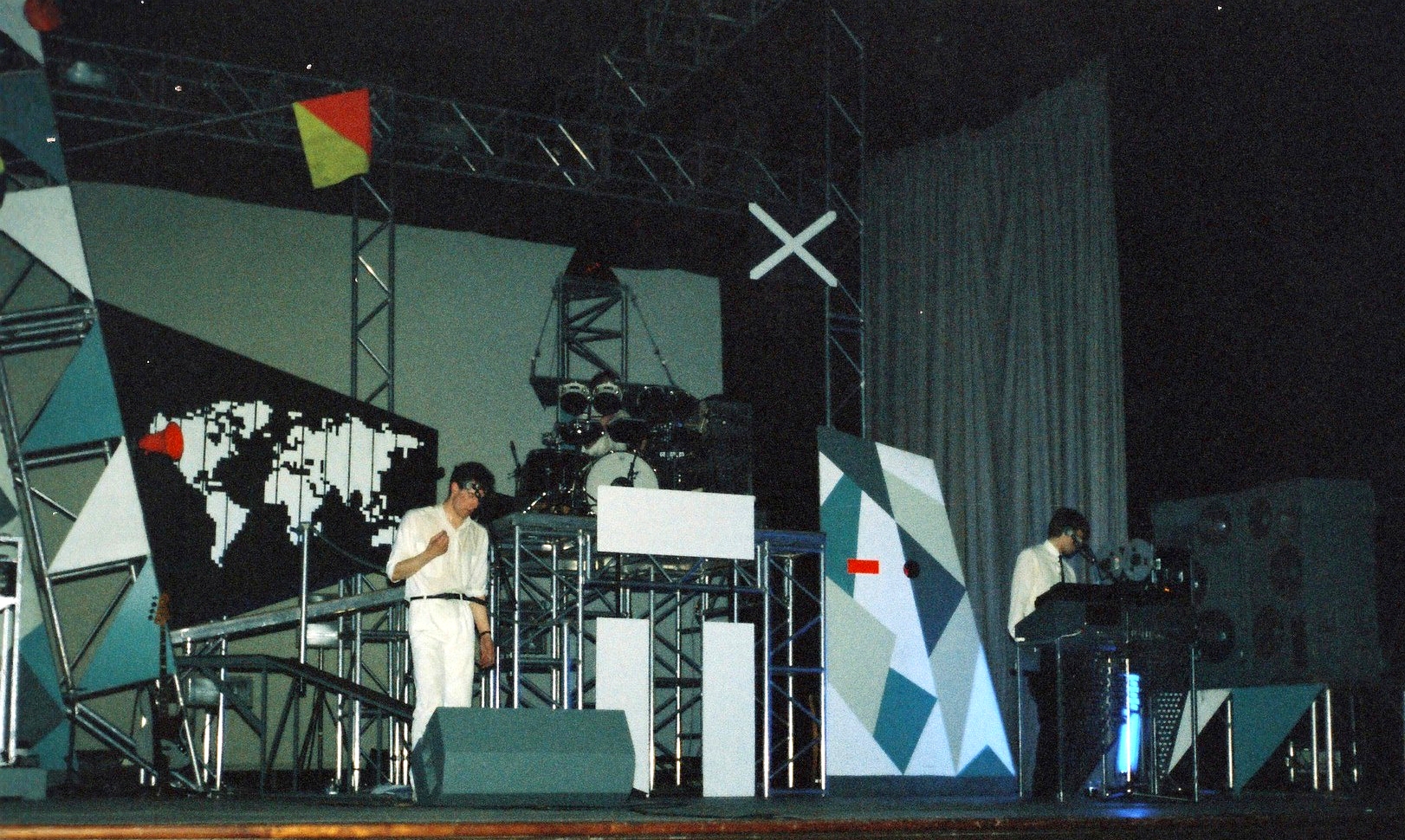 Meanwhile, the Prophet 5 had been a godsend as one of the first programmable polyphonic synths and used integrated circuits to make it more compact and versatile compared with say, a Polymoog or Yamaha CS50. It played an important role in the pioneering OMD sound as much as the Mellotron, with tracks such as ‘Romance Of The Telescope’. “’Romance…’ is actually a Prophet 5 factory preset for the out of tune brass sound but the choir is Mellotron” remembered Andy.

Previously, cheaper synths either had presets like Paul’s little Korg which restricted the number of sounds they could make, or they would have no memory like their Korg MS20. Synths like the latter were largely impractical for live use as a keyboard although Mal Holmes had the MS20 to generate fixed sounds for percussive effects triggered by his drum pads. But now with a programmable synth and patch memories at their disposal, a sound could be created or found, stored and then recalled for its corresponding song at a touch of a button.

However, it was still early days for developments in chip based technology and while the Prophet 5 was invaluable for studio work, the oscillators which generated the sound source would destabilise over the time it was switched on, thus causing tuning difficulties. Also the precious memories could be scrambled due to voltage spikes. To add an extra headache, the Prophet 5 had a reputation for reliability issues which necessitated two examples being taken out on the road. 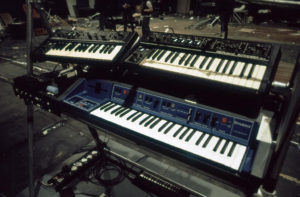 Martin Cooper’s set-up included Roland SH09 and SH2 monosynths for basslines and melodies plus a Vox Jaguar organ for chords.

While this organ had been an essential part of the early OMD sound, especially on the first album, it was of 1960s vintage, large and of transistor construction. So again, it was extremely delicate and not suited for the perils of a world tour.

But this system was also very fragile due to the exposed ceramic piezoelectric sensors on the pads. Ceramics are not a naturally malleable material so therefore prone to breakage when hit hard. Famously, a home made electronic kit designed by Paul Humphreys and Paul Collister fell to pieces while being used by Mal during OMD’s first show as a live quartet. “I hit the crystal microphone inside the pad and smashed it to bits!” remembered Mal.

The practicalities of a one and a half hour show had shown various shortcomings and provided unnecessarily stress for a group of young musicians still fighting with a music press and audience that didn’t consider synthpop real music and thought synth bands couldn’t play live! So with the future in mind, OMD looked for an instrumental set-up that was more streamlined and practical for live work.

They found it with the E-mu Systems Emulator. Founded in 1971 by Scott Wedge and Dave Rossum, E-mu began making modular synthesizers whose users included jazz virtuoso Herbie Hancock. At a convention, Wedge and Rossum saw the Fairlight CMI, the world’s first computerised digital sampling synthesizer and set about making a less expensive sampler. 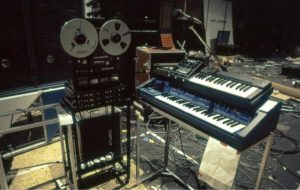 It was a floppy disk-based keyboard workstation which enabled the recording of any sound to non-volatile media and allowed these samples to be played back as musical notes. As an instrument, the Emulator had no sound of its own.

Each aural palette had to be loaded into its memory separately, whether it was from a factory disk of sounds produced by E-mu themselves like the symphonic strings used on ‘Silent Running’, the sound of OMD’s own synths such as the Prophet 5, the voice of Andy McCluskey crooning “blue” on ‘Dazzle Ships’ or the bugle from the BBC Sound Effects record used on ‘This Is Helena’. But by wanting to make life easier for themselves on the road, OMD also entered the brave new world of sampling and were now able to realise some of their more musique concrete ambitions as was apparent on the ‘Dazzle Ships’ album.

But with regards touring, the Mellotron, Elgam, Vox Jaguar and the Prophet 5 could now be retired and replaced by two of these wonder machines on stage. However, the samples were low resolution and grainy at only 8 bits. While these sounds were suitable for chords and effects, the live punch required from the rhythm section meant that Martin’s Roland SH2 was retained as its phat twin oscillator bass sound was formidable in a live context.

Also kept was the similar looking but single oscillator SH09 which was OMD’s preferred synth bass in the studio. Meanwhile, Paul’s Korg Micro-Preset also remained. This was an important artistic gesture as when layered with suitable effects, it provided a cutting melodic bite that was in keeping with OMD’s original garage band ethos.

In that spirit, a reel-to-reel tape machine containing things such as the sequence of ‘Messages’ and the Speak & Spell Machine on ‘Genetic Engineering’ was still very much part of the line-up although this was upgraded to a new Tascam from the older Revox.

With Andy, there was no equipment change at all with his trusty Fender Jazz bass guitar. Martin however had his own Fender Jaguar bass for use on ‘Julia’s Song’ as Andy’s was strung in an unconventional manner with the lowest string ‘E’ at the bottom due to first learning to play on a left handed Wilson Rapier bass turned upside down! 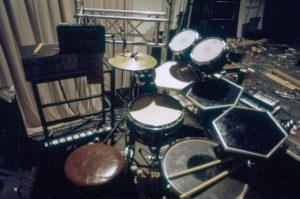 For Mal, his new toy came with three Simmons SDS-V drum synths. Co-designed by LANDSCAPE’s Richard James Burgess, these replaced two of the pads hooked to one of the Pearl Syncussion units.

The Simmons was very sturdy, having already been road tested on tour by acts such as JAPAN and ULTRAVOX. It was also less of a headache to soundcheck than normal drums.

The SDS-V’s distinctive hexagonal pads were actually made from the same material as police riot sheets.Although he didn’t use the whole Simmons kit, Mal later complained of aching arms. This was from a ‘shock’ that came from hitting the Simmons pads as they did not have the natural give of skinned acoustic drums or even the earlier electronic pads that controlled the Syncussion units and MS20 which to all intents and purposes, were tiny but amplified drums!

Although a fuller Simmons kit was used subsequently on the ‘Junk Culture’ tour, it was only later as OMD made in-roads into breaking synthphobic America with the more conventional sounding ‘Crush’ that Mal started to use a full acoustic drum kit and was allowed to have one of the ultimate percussive symbols of rock ‘n’ roll, the cymbal! This would explain why Mal’s early drum kit always looked like it had been raided by thieves between the soundcheck and gig! Mal remembered “So many people like the road crew said ‘I don’t know what’s wrong with your drum kit but it looks really different! NO CYMBALS, THAT’S IT!’” 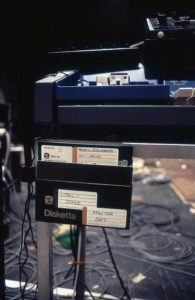 Although access to digital representations of their old synths and keyboards were now available using the Emulator live, the fledgling technology was prone to reading errors with the then state-of-the-art 5 ¼ floppy disks.

These visually did make interesting artefacts however as Peter Saville found when he saw NEW ORDER’s Emulator and designed the iconic ‘Blue Monday’ sleeve as a coded 12 inch floppy complete with cut-outs!

The Emulator would seem to take forever to load in the context of a show and the setlist needed be arranged to accommodate this. One interesting consequence of the Emulator’s loading time was that Andy’s between song banter increased to cover it up!!!

Later when the band upgraded to the Emulator II with its then innovative hard drive in 1985, Andy would often joke about Paul’s problems with his hard disk!!

Despite the expected glitches with the new Emulators, on the whole they gave the band less to worry about, especially after the difficult gestation of ‘Dazzle Ships’ and the critical mauling it received from the press.

It allowed for the band to deliver a more confident and professional performance that when combined with Ken Kennedy and Peter Saville’s impressive stage set, would later be recognised as their best live tour to date. But that’s another story although strangely, brass sections and America were only just round the corner…