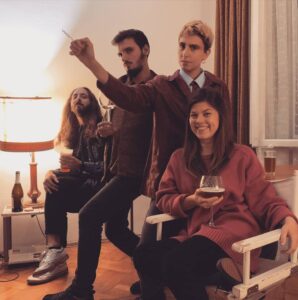 ‘Terejo’ with its rhythmical neo-funk motif imagined what TALKING HEADS might have sounded like as a more electronic band and perhaps unsurprisingly sounded like a female fronted LCD SOUNDSYSTEM.

Showcasing the varied musical facets of ZIMBRU, the ‘Little Creatures’ title song was moodier, constructed around a prominent off-beat and an incessant electronic drive. Their most recent single ‘The Ground’

released in August 2020 reflected the sadness many were feeling around the world in difficult times and acted as something of a cathartic release for the band.

Eager to play live again, ZIMBRU will perform at the Berlin Mixtape virtual concert on THURSDAY 11TH FEBRUARY 2021. Originally conceived as a single band event, it has since developed into a project where six Romanian singers will each a cover song that has a strong connection to the city of Berlin. 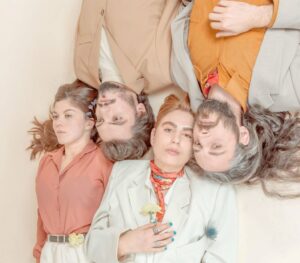 The songs were selected by LOLA Magazine based in Berlin while all the singers are managed by Cirkular in Romania. Teodora Retegan from ZIMBRU will be one of the singers while the instrumental parts for all of the songs have been produced by Andrei Bobiș who incidentally is a co-founder of Cirkular. Other featured singers include Sofia Zadar, Geo Aghinea and Adame Wolf among others.

In a break from preparations for their upcoming online event, Teodora Retegan and Andrei Bobiș from ZIMBRU talked about the band’s career to date.

How did ZIMBRU come into being, specifically as a band using electronics?

Andrei: ZIMBRU came into being over e-mail! Teo, Oana and I used to play in another band called LIGHTS OUT and about a year after that was wrapped up, I sent Teo this silly song idea and she recorded some cool vocals and then we realized we really missed each other and spent the next three years writing songs basically. Oana and Paul joined in 2018 and that’s when we started putting a live show together. I guess we liked a lot of artists that have cool arrangements featuring both electronic and acoustic stuff mashed together in interesting / peculiar ways.

The ‘Little Creatures’ EP title and that band name indicate that ZIMBRU have a strong TALKING HEADS influence?

Andrei: We definitely love TALKING HEADS and have danced to many TALKING HEADS records over the years, so I’m sure that plenty of that has subconsciously made it into our music. However the title is not a direct reference to the TALKING HEADS album. It was one of those placeholder titles (until we think of a better one, never actually thinking of one) that kind of started making more and more sense as our debut EP came together. Our latest single ‘The Ground’ has a strong TALKING HEADS influence, as a lot of it was written as I was reading Byrne’s book ‘How Music Works’ – especially the chapter on their work on ‘Speaking In Tongues’ and ‘Remain In Light’. 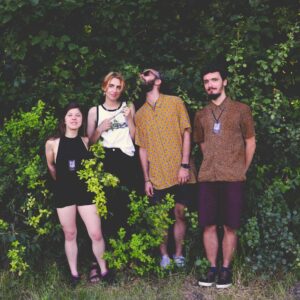 What other bands have inspired ZIMBRU?

Andrei: Uuh, tough one, a list feels like a weird thing to do so I’ll do the next best thing and point you towards some of the playlists we have curated over the past two years under the DJ BIVOL moniker which are available on our Spotify artist profile.

What was it like to grow up in Romania with the more artistic aspirations you had in your psyche? Was it easy being around people at school who might have preferred football or waiting to be called up for national service?

Teodora: Usually it’s not very desirable to explore this as a career (that goes for anything in the arts department) because there is a lot of poverty in Romania and of course parents would prefer their children having stability and picking a career that would ensure a monthly income. I think most humans have artistic potential, but it’s hard to express it under capitalism because if you can’t monetise it, you don’t stand a chance in doing it more than a hobby. That is very heartbreaking to me. I have been privileged enough to be supported by my family so here I am, trying.

‘Dog Heaven’ was your debut single, how do you look back on it now?

Andrei: Not a single per se, though, as it never had an actual release other than the live version. Uhm, it has been so long since we played it or listened to it that it’s like listening to another band really, but maybe time passing hasn’t really changed anything about it? I bet I’d still be pretty pumped to play it if playing music was still a thing.

How did you decide between singing in your own language and English?

Teodora: Honestly I don’t know how much of a conscious decision it was. Growing up in post revolution Romania, we had all these brands and music channels and fast food chains entering our country and for a while we thought all things western were Jesus Christ. You could hear English songs on the radio and you thought “ah this is so cool, can I do that?”. Romanian is beautiful though, I’ll try to write more in română.

Both ‘Terejo’ and ‘Dyo’ sound like an enigmatic female fronted LCD SOUNDSYSTEM? Have they been an inspiration to ZIMBRU, in particular with their use of electronics?

The union between art and music is particularly prevalent in ZIMBRU’s video for ‘Divination’, how important is this ethos to you as a band?

Andrei: Well, we put our hearts into the songs and everything we make around the songs, be it videos, photos or anything else – and I guess that’s the highly relevant part, creating some sort of context for the music that means something and is truly genuine. However not taking ourselves too seriously is also a thing that matters, so you know, which art, what music?

Your most recent single ‘The Ground’ has been described as your saddest (which is quite fitting with the current situation) and it calls for kinship with Mother Nature, please describe the song’s genesis?

Teodora: My father was doing some gardening in lockdown and I joined him on this particularly windy day, I think we planted radishes and lots of onions. Here comes the cliché part *ah revelations* where after months of isolation, I start feeling connected to the soil, I shove my fingers in the ground like I never knew it was there all along. So I went into a permaculture spiralling spiritual phase and made everybody watch documentaries about the ground, probably annoyed them a bit, and after a while the song came to life. Maybe I did not annoy them that much, we’re nature loving hobbits…

The do-it-yourself video for ‘The Ground’ makes a strong visual statement, how did you come up with the concept?

Teodora: We wanted something simple and filled with love. We made it one afternoon in Oana’s garden and it’s probably one of my favourite days up to this point. There is something magic about seemingly mundane activities such as hanging out with friends outside. It’s a small treasure I don’t want to take for granted again.

Is ‘Slow Disco’ actually a metaphor as opposed to being about dancing?

Andrei: Actually it is quite a literal title, the early instrumental version sounded like a disco track that was slowed down. As with ‘Little Creatures’, it was a placeholder title that stuck and started to make a lot more sense as time went on. Looking through the studio computer, I actually found that before it was named ‘Slow Disco’, it had yet another placeholder title, ‘Indina’, can’t quite remember why.

What is the band’s format and ethos with presenting music live?

Teodora: I think we often laugh about how we want to be punk on stage. I am not sure it’s the energy we exude but we sure as hell want it to be. Maybe after more than half a year of not doing any shows we will be 100% punk!

ZIMBRU have a small back catalogue so far of several singles and an EP, what are your future plans for recording and releases?

Andrei: I don’t know what kind of plans you could possibly make given the context. We’d love to write new things and that’s about the only thing on our mind right now. We don’t really sit on our music so you’ll be hearing from us soonish (fingers crossed). 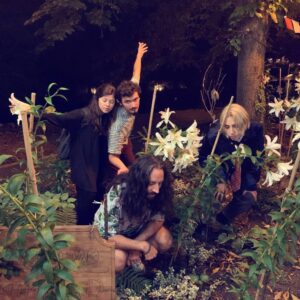 Does the increasing profile of MOLCHAT DOMA from Belarus give you any encouragement with regards alternative Eastern European acts making breakthroughs to Western audiences?

Andrei: I think a lot of music coming out of Eastern Europe is either sold as a token – like MOLCHAT DOMA – or as an exotic item to western audiences, like a lot of acts that play music with “oriental” influences, for example. Both are equally bad. Of course, I’m more than happy that these acts have found an audience, but it doesn’t mean much. The one thing that is exciting is that it feels that some of the gatekeeping events like showcase festivals have become increasingly accessible.

What are your hopes and fears as a band and as people as 2021 begins?

Teodora: My hope is that we’ll write more songs about nature and non-human animals and maybe do something more on the activist side of things. And my *personal* and kind of two years in the future dream is to start a queer commune and a sanctuary! I might never stop if I start talking about fears, so I’ll be nice and spare you!

ELECTRICITYCLUB.CO.UK gives its warmest thanks to ZIMBRU

Special thanks to Ingo Tegge at Goethe-Zentrum Klausenburg

EP and ‘The Ground’

available from the usual digital platforms including https://zimbru.bandcamp.com/ 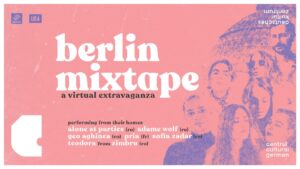 Berlin Mixtape featuring ZIMBRU will be streamed via Facebook on THURSDAY 11TH FEBRUARY 2021 at 1700 GMT / 1900 EET. Event information and a list of the covered songs with their respective singers can be found at: https://www.facebook.com/events/3058774840892550