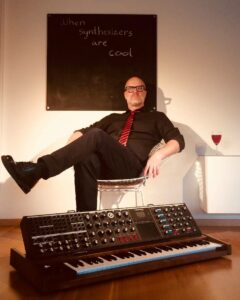 Eddie Bengtsson has been a trailblazing presence on the Swedish electronic music scene.

While best known for his involvement in PAGE and S.P.O.C.K, there have also been his solo adventures SISTA MANNEN PÅ JORDEN and THIS FISH NEEDS A BIKE as well as various productions, collaborations and remixes. Inspired by Synth Britannia, two of Bengtsson’s most notable influences have been Vince Clarke and Gary Numan, with ’Dreaming Of Me’ and ’Tracks’ among the cover versions he has recorded over the years. Meanwhile, THE HUMAN LEAGUE, OMD and ULTRAVOX also loom heavily within Bengtsson’s concepts and sound.

Eddie Bengtsson had actually started out as a drummer but dumped his kit for synths after hearing the ‘Music For Parties’ by  SILICON TEENS, convinced they were a real band. As a indirect result, the music of Eddie Bengtsson has always been rhythmic and bursting with synth melodies, continuing to maintain a cult following both at home and in Europe.

Although having played their farewell concert in 2000, PAGE has become Bengtsson’s most comparatively prolific outlet since reuniting with Marina Schiptjenko in 2010 for the album ’Nu’.

With a independent zest and focus despite having made music for nearly four decades, 2013 and 2017 saw the respective releases of ’Hemma’ and ’Det Är Ingen Vacker Värld Men Det Råkar Vara Så Det Ser Ut’ by PAGE.

Meanwhile 2019 will see the release of a brand new PAGE long player; entitled ’Fakta För Alla’ (translated as ”Facts For All”), Bengtsson reckons ”It’s the best I have ever done and that says alot. Heavely influenced by my favourite albums, it’s the songs NumanVox never did”. From it, the first single will be ‘Kloner’.

So as a Beginner’s Guide to his vast catalogue of work under his many different guises, ELECTRICITYCLUB.CO.UK presents eighteen songs which are decisively ‘Just Like Eddie’ with commentary from the man himself… 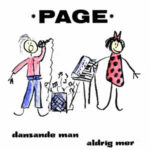 Originally comprising of Eddie Bengtsson, Marina Schiptjenko and Anders Eliasson, PAGE brought the more purer form of poptronica to Sweden. Their debut single ‘Dansande Man’ was a frantically percussive excursion suitable for dancing to as the title suggested. Bengtsson recalled it as: “One of the only songs I have co-written with somebody else, maybe the only one in fact. I haven’t decided if the song is a blessing or a curse. If this is the only song you’ve heard by PAGE, then it’s sad”. 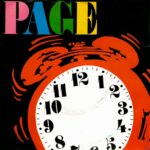 Eddie Bengtsson has often been referred to as the Swedish Vince Clarke, he confessed: “I had a YAZOO-period once…” when describing the second PAGE single ‘Som Skjuten Ur En Kanon’. Taking their time with releasing a debut album, ‘Hallå! (Var Tog Månbasen Vägen?)’ was recorded by Bengtsson and Schiptjenko as a duo and eventually emerged in 1994. Meanwhile 1992’s interim ‘Page’ collection gathered various tracks and remixes from 1984-1991 as a clearing of the vaults. 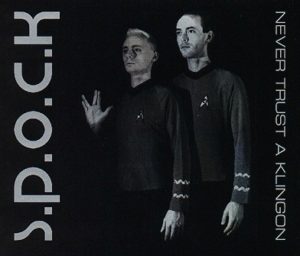 In parallel with PAGE, Bengtsson joined vocalist Alexander Hofman  to write and perform some ‘Star Trek’ themed songs for a friend’s Trekkie themed birthday party. ‘Never Trust A Klingon’ is still their crowning moment, a genius combination of deadpan vocals, bubbling electronics and samples from Captain James T Kirk himself. “I wanted to make something ‘hard’ and mechanical for S.P.O.C.K. Maybe this is their ‘Dansande Man’ in a way. A timeless song I think”. 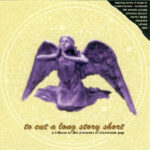 ‘Electricity’ was how many in the UK first heard of PAGE as the track was bootlegged for various OMD covers compilations. Bengtsson remembered: “We did this for an album featuring covers of classic electronic pop songs. Some songs you shouldn’t make covers of, because they are perfect as they are. Just as ‘Electricity’ is by OMD. Therefore I wanted it to sound as close to the original as I could”. Meanwhile, S.P.O.C.K contributed a detached reinterpretation of DURAN DURAN’s ‘Planet Earth’. 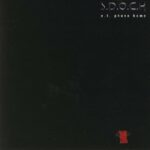 For their third album, the S.P.O.C.K acquired a new crew member in Johan Billing. Inspired by the Extra-Terrestrial’s growly catchphrase, despite once stating ‘All E.T:s Aren’t Nice’ Bengtsson was pumped and energised: “Maybe my favourite song of all the songs I wrote for S.P.O.C.K. And the only one I wrote the lyrics for to”. But despite this artistic high, he departed the Federation Starship via its transporter room at the end of his five year mission following ‘Assignment: Earth’.

Although initially a collaboration with Matts Wiberg, SISTA MANNEN PÅ JORDEN was effectively Bengtsson’s solo vehicle. A glorious love song to Mother Earth, ‘En Blå Planet’ was a delightful drumbox waltz with haunting echoes of OMD’s ‘International’ that even had him soaring to falsetto. With grainy synthetic strings and becoming more percussively militaristic as it progressed, this was according to Bengtsson: “The first SMPJ song with lyrics. Still as beautiful as it was ‘then’”. 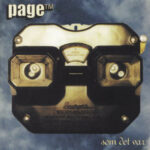 “PAGE had a ‘gitarr-pop’ period” lamented Bengtsson, “Marina wasn’t in the band anymore and I made the mistake of continuing with the name. Shouldn’t have done that. The interesting thing is I made a whole PAGE album where the synths sounded so very much like guitars, the listeners really thought they were. ‘Too much guitars some said’ and the ordinary pop people said ‘too much synths’. Those two albums were really good, but didn’t really reach anyone, which is sad!”

‘Leonov’ was a fine tribute to Alexey Leonov, the legendary Voskhod 2 cosmonaut who became the first man to walk in space in 1965 and also took part in the 1975’s joint US / Soviet Apollo Soyuz Test Project. With its spacey floating vibe, it more than fitted in with regular space travel and Sci-Fi themes of SISTA MANNEN PÅ JORDEN. “I wanted to get the feeling of a big spaceship, down in the machine room, a bit Russian and all. An SMPJ favourite” said Bengtsson, “The video made for this, was totaly weird!”

Having sung in Swedish for most of his career, Bengtsson looked to the language of the electronic pop that had emerged from British post-punk. While ‘Putting My Suit On’ could have been PAGE or SISTA MANNEN PÅ JORDEN, ‘Do It’ had a deeper aggressiveness to its texture: “From another CD that kinda just passed by. THIS FISH NEEDS A BIKE is / was my English project. I wanted to do some kind of Punktronica. The whole album is very good!”

‘Allt Är Klart’ was an ULTRAVOX tribute and effectively a Swedish vocal version of the instrumental B-side ‘Alles Klar’. The hard staccato bassline was borrowed from the original, but the track was bolstered by some superb whirring synths in the tradition of Billy Currie’. “I told Christer Hermodsson (the other part of SMPJ and stage keyboardist) to make this ULTRAVOX sounding song even more ULTRAVOX sounding.” Bengtsson recalled, “ Christer is a big ULTRAVOX fan, and he made this so very cool”.

Having departed in 1996 and found European success in BWO, Marina Schiptjenko returned to PAGE in 2010; Bengtsson was very pleased to see her back: “From the album ‘Nu’ and that was PAGE’s ‘Marina is back again in the band’ album. New sound but still very PAGE”. With its electro Schaffel stomp, ‘Ett S.O.S’ allowed Bengtsson to freely exploit his Glamtronica instincts, something very much in evidence on PAGE’s 2012 cover of SLADE’s ‘Coz I Luv U’ for ‘The Seventies Revisited’ tribute compilation.

Available on the PAGE album ‘Nu’

ROBERT MARLOW The Future – Glamtronica Redux By Eddie B (2013) 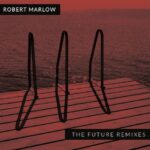 For ‘The Future’, Eddie Bengtsson took his Glamtronica ethos to Basildon for his treatment of the Essex new town’s often forgotten trailblazer, best known for being a former bandmate of Alison Moyet and the best friend of Vince Clarke who produced his best known tune ‘The Face Of Dorian Gray’: “Well, that song really got so much cooler after my Glamtronica treatment. But still, Marlow is Marlow and what he does, it’s what he should sound like, and that cool enough”. 🙂

Available on the ROBERT MARLOW ‎album ‘The Future Remixes’ 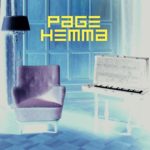 The warm reception for ‘Nu’ and the remergence of electronic pop led to PAGE following up with ‘Hemma’. Beginning with a sampled burst of THE SEX PISTOLS ‘Holidays In The Sun’ before revealing a distinctly Clarkean spirit deep inside the song’s genetic make-up, ’Lyssnade På Min Radio’ was something of an angry musical rant with Bengtsson’s observations on the awfulness of modern radio shows: “A classic pop song, about all the crap music that gets played on radio. This song never did”.

Available on the PAGE album ‘Hemma’ 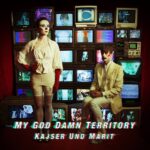 Stockholm duo Kajsa Olofsson and Mark Pettersson were already veterans of five more conventionally minded albums and initially influenced by Grunge. But for their sixth long playing offering ‘Kajser Und Marit’, they wanted  a fresh electronic touch. Enter label mate Eddie Bengtsson as collaborator and producer: “MY GOD DAMN TERRITORY, probably Sweden’s coolest most fresh indietronica band. A bit sad they opted for making a vinyl instead of a CD. Should have been huge, this band”.

“The newest song from SMPJ. I really love it. Gives me goose bumps when I hear it” says Bengtsson. Originally released as a single domestically in Swedish, the sparkly atmospheric pop of ‘Stadens Alla Ljus’ was given an English language treatment by Simon Helm of Cold War Night Life as the lyrically darker ‘All The City Lights’ for a special ‘Translate’ EP made available exclusively to attendees of SISTA MANNEN PÅ JORDEN’s debut London performance at The Lexington in 2015. 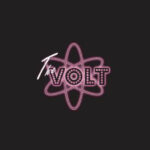 “THE VOLT, with me and Ulrika Mild from COMPUTE did this one single…” said Bengtsson, “there was plans for more, maybe still are. Played a lot of ‘Fallout 3’ when I made this and of course it is a cover”. Written by jazz guitarist Dickie Thompson as ‘Thirteen Women & One Man’ and made famous by Elvis Presley’s unrequited crush Ann Margret, Mild gave her own seductive Bassey-like vocal treatment over the drum machine laden backing in this saucy ode to post-apocalypse permissiveness.

Available on THE VOLT single ‘Thirteen Men’ via Energy Rekords 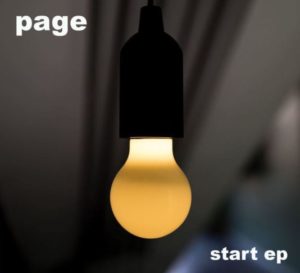 After ‘Lyssnade På Min Radio’, Bengtsson found solace in ‘The Pleasure Principle’ and ‘Vienna’: “I have really found how I want PAGE to sound like, this is it. I built some ‘walls’ to shut out all the music that don’t interest me. Inside the walls I have my favourite albums. I listen to them alot, and almost only them. I get a kick from that and lots of inspiration. It’s a model I recommend to anyone. We can call it the Eddie-modell and I can explain it better some other time”.

Available on the PAGE EP ‘Start’ via Energy Rekords 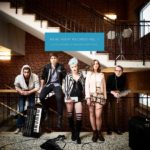 A sombre number laced with the darker side of early OMD in its gothic overdrones for a collection of modern electronic pop inspired by John Hughes and The Brat Pack, ‘To See A Man Like Me Go Down’ saw Bengtsson dust off his JEDDY 3 moniker used in 2006 for the one-off ‘Another Day’: “ANYMACHINE is the very talented Ulf Persson from ARACHNOPHOBIA, it’s just that he doesn’t know how talented he is. This is his song that I wrote the lyrics and the song melody for. A nice collaboration”.