With the release of ‘Fakta För Alla’, PAGE have not only unveiled a candidate for the best album of 2019; they have sculpted some of the most mature and sophisticated sounds of their career.

It is nearly forty years since the first PAGE single was released, establishing them as the house band of the Swedish poptronica scene. ‘Dansande Man’ (‘Dancing Man’) became an instant cult classic, and each successive recording has raised their standing as the Nordic successors to ULTRAVOX, GARY NUMAN and SPARKS.

Where other Swedish bands have aped DEPECHE MODE and their changes of style, PAGE have struck a course firmly rooted in the spirit of 1979.

There have been some changes to the line-up over the years, but the original team of Eddie Bengtsson and keyboardist Marina Schiptjenko has been the core since 2010. With each album, their sound has been refined and polished, until what is left is a bank of Moog filters and patches underpinning Bengtsson’s characteristic melodies. The result is a set of songs that are the natural successors to DRAMATIS and VISAGE with a Swedish twist. 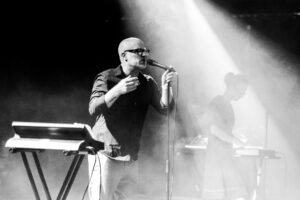 Bengtsson can’t help making catchy hooks, and ‘Fakta För Alla’ (‘Facts For Everyone’) doesn’t have a single filler track. It is hardcore poptronica, with sweeping filters and bubbling basses providing the bedrock for Bengtsson’s dynamic vocal lines. Their 2017 album, ‘Det Är Ingen Vacker Värld Men Det Råkar Vara Så Det Ser Ut’ suggested the direction that PAGE would be taking, but it didn’t prepare us for how good the songs would become.

The album opens with the title track, which draws upon Bengtsson’s love for English electronic music. He has previously covered Numan’s ‘Tracks’ (in Swedish as ‘Spår’) and the lightness and glam of Synth Britannia both find their way into the material. PAGE never bought into images of robotic alienation and having once covered SLADE’s ‘Coz I Luv You’, their upbeat style owes more to T-REX than JOHN FOXX.

‘Fakta För Alla’ is followed by ‘Puls’ (‘Pulse’), which takes the glam quotient higher with a stomping rhythm line and saw waves lined up in catchy phrases. Strings and soaring synths point to Billy Currie as a source of inspiration, but there is nothing derivative about the stylings. 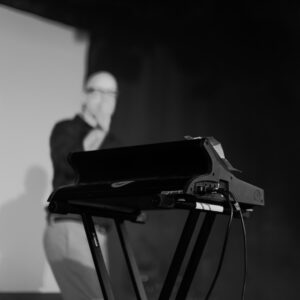 ‘Blöder Du’ (‘Are You Bleeding?’) takes proceedings in a darker direction. It is a classy, elegant track that growls and glowers with brooding synth lines.

Bengtsson ditched most of his keyboards for a collection of Moogs some time ago, and the familiar resonance of the company’s distinctive oscillators unites all of the songs on ‘Fakta För Alla’. There is something of ‘Vienna’-era ULTRAVOX in the sequencer line of ‘Första smällen’ (‘The First Punch’), but the noir spirit is warmed up by Bengtsson’s vocals. You don’t need to wear a trenchcoat or hang around Conny’s Studio to enjoy it, but it helps.

‘Klara Färdiga Gå’ (‘Ready Set Go’) takes the tempo up a notch with a track that is bound to become a live favourite. PAGE excel at simple, catchy and danceable poptronica, and the violin comes back here with purpose. That is followed by ‘Alla Ljuden I Ditt Rum’ (’All the Sounds in Your Room’), which finds PAGE at their most Numan-esque. The track’s low, electronic rhythms serve as the scaffolding for layers of atmospheric, gleaming pads and lead synths.

‘Glans & Gloria’ (‘Glory & Gloria’) is an instrumental that keeps the faith with the album’s 1979 vibe. It is inescapably Bengtsson’s music, but the addition of a virtual string section expands its sonic possibilities. 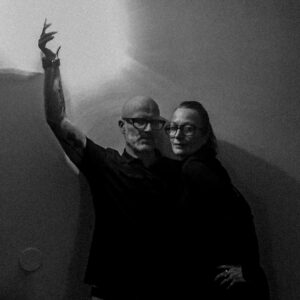 ‘Kloner’ has Moog stylings galore. The technology sometimes leads to the song: just as it is hard to imagine ‘Cars’ without the Minimoog, it is also hard to imagine that someone wouldn’t have written ‘Cars’ once they had the keyboard in front of them. ‘Kloner’ wouldn’t sound the same with Roland or Yamaha instruments, but its dynamic, upbeat chorus wouldn’t have happened without Bengtsson’s natural gift for melody.

‘Okänd Man’ (‘Unknown Man’) starts with piano and violin under a sync patch from a Moog – a statement of intent drawn from the Billy Currie playbook, which leads into classic PAGE sounds.

One of Bengtsson’s achievements is to keep from sounding derivative of the classic electronic masters while borrowing some of their sounds and stylings.

The album wraps with two versions of ‘Maskin’ (‘Machine’) – the second a reprise. Previously, this is the kind of material that Bengtsson would reserve for his SISTA MANNEN PÅ JORDEN project, but it fits naturally into the structure of ‘Fakta För Alla’. It also shows that the band’s sound has outgrown any simple pop labels – this is Pagetronica, in a class by itself.

‘Fakta För Alla’ is released by Energy Rekords as a CD and vinyl LP, available from https://hotstuff.se/page/x-7640