August 24, 2019 / electricityclub / Comments Off on A Short Conversation with RATIONAL YOUTH Today, Canada is a hotbed of electronic pop talent like DANA JEAN PHOENIX, PURITY RING, GRIMES, TR/ST, AUSTRA, FM ATTACK, PARALLELS and ELECTRIC YOUTH, but it might not have happened without the trailblazing mission of RATIONAL YOUTH.

Comprising of Tracy Howe, Bill Vorn and Kevin Komoda, their debut album ‘Cold War Night Life’ captured the fraught tensions of two opposing ideologies and living under the spectre of Mutually Assured Destruction. A tense vision of how young Poles might have spent their down time in underground clubs under martial law was captured in the single ‘Saturdays In Silesia’, while RATIONAL YOUTH also observed “Checkpoint Charlie’s social climb” and the possibility of ‘Dancing On The Berlin Wall’.

When The Berlin Wall came down at the end of 1989, RATIONAL YOUTH’s work was kind of done, but with the threat of new “walls” being built again on both sides of the Atlantic and scary face-offs along the 38th Parallel, ‘Cold War Night Life’ is more than relevant again and an apt document for future generations to reference.

being given the lavish reissue treatment by Universal Music and RATIONAL YOUTH touring Germany with fellow Canadians PSYCHE, Tracy Howe kindly took time out to chat about his landmark debut. 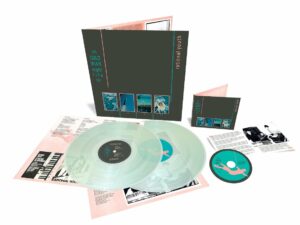 When you released ‘Cold War Night Life’ in 1982, it must have been incomprehensible that 37 years later, one of the world’s biggest entertainment corporations would be putting money behind an expanded reissue in clear vinyl?

Absolutely unimaginable, and especially considering how Universal came to be the owners of the master YUL Records, who had released the original album in 1982.

They then sold it to Capitol-EMI Records in 1985 and EMI subsequently buried it. They weren’t the slightest bit interested in it, and didn’t understand the record at all, but didn’t want anybody else to have it. It was never released by them until 1998, when EMI Canada released a CD version of it. Years later, EMI are bought by Universal Music, and Universal Canada have a Vice-President of Catalogue Marketing, Ivar Hamilton, who always loved the album and used to play it on the air when he was in radio. So here we are.

How much involvement were you able to have in the package?

All the way through, every step. They sent everything to me, graphic elements, remastering, text for the advertising copy and press releases to me for approval. Anything I didn’t like, they changed it. Honestly, they were just wonderful to work with, and they treated this release like something special that they really want to be proud of too. It’s really almost the polar opposite of my previous experience with a major label.

Despite being the album opener, ‘Close To Nature’ is almost the forgotten RATIONAL YOUTH song but it is glorious, with its many layers and subtle nuances?

There were a couple of songs on the album that I felt sort of channelled through Bill Vorn and me, and wrote themselves, and that was one of them (the other was ‘Just A Sound In The Night’). That doesn’t happen to me anymore. Nowadays I have to sweat out every crotchet and semi-quaver, so to speak. It was written when the Doomsday Clock was at five to midnight, and it expressed desperation and utter frustration that the fundamental energy of the universe was in the hands of sociopaths. We have always opened our shows with ‘Close To Nature’, all the way back to 1981.

‘Les Meillleur Des Mondes’ was a chilling dystopian instrumental and the French title of ‘Brave New World’, had it been inspired by the book?

Yes indeed. Bill Vorn had just read it and we had both bought the ‘Computer World’ LP in the same week, and that’s what you hear there. 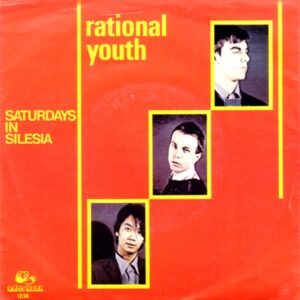 Two key tools in the production of ‘Cold War Night Life’ were the Roland MC4 Microcomposer and Roland TR808 Rhythm Composer, how did you come to discover these and did they break the bank seeing as you were a new act?

Well I got a bit of a free ride there, as expensive they indeed were, but Bill had a massive Roland System 700 rig, and he sold all of it except one complete modular synthesizer, and that paid for the TR-808 and the MC4. We even got the memory expansion for the MC-4, which brought it up to a whopping 24kb!

We knew about the MC8, but we’d never seen one. When the MC4 came out, it was the perfect picture for us because we still had Bill’s remaining System 700, and three System 100s, and as the MC4 could sequence 4 monophonic synths simultaneously, it was phenomenal, and there was no-one anywhere near us who were doing that sort of thing.

As for the 808, we’d been using a CR-78 up until then, and when I first heard the 808, it blew my face off, it sounded so great, and so tight, although we used the MC4 as the master clock, but it was the same thing really, super tight pre-MIDI wonderfulness.

What was the creative chemistry like within RATIONAL YOUTH? Did you see yourself as synth punks?

That would be a good way to describe it. Of course as soon as we formed, we felt like we were breathing different air from everyone else. But I think we were honestly part of something seriously disruptive, in the sense that we were aware that we part of a movement to democratise the making and distribution of music, which started with punk, and we were part of the vanguard of the technological revolution within that movement. There have been good and bad aspects of that whole upheaval in the music business, but at the end of the day I am actually very happy that people are able to make really good records in their bedrooms.

The marvellous ‘Ring The Bells’ gave RATIONAL YOUTH a chance to explore their moodier side, what can you remember about making it?

Well the image I had in mind was an old black and white photo showing the first Berlin Wall being constructed and the people on the East side of it looking down out of their windows watching as they were being walled in, and I thought of the line “a million faces stare out of the windows of the past”, and also I think I must have been thinking about ULTRAVOX’s ‘Vienna’, in terms of mood.

At the time I was obviously aware that I was deliberately writing songs about the Cold War, and about the sense that we were all on the edge of annihilation, but I think I kind of romanticised the whole thing, and it actually seems more frightening now. Looking back, I sometimes wonder what I was doing trying to make something poignant and beautiful out of the whole thing, but then what’s art about?

Looking back, with Canada being stuck between the USA and the Soviet Union, do you think you that was one of the reasons you manage to capture a tension in the music that West Europeans in particular could relate to?

Yes I do. We always had that pull between those two poles, and still do.

Another aspect of that is while I love a lot of American music, especially African-American music, when we started RATIONAL YOUTH, we decided on certain boundaries that we would not cross stylistically, and one was that there would be no “blue notes”, which obviously drives you in the direction of European music.

I think it is great to be eclectic, if that is what you are about, and you can pull it off in a way that is convincing, but whenever I try it I get into trouble, ie produce rubbish. I need to say to myself “I do synthpop. RATIONAL YOUTH sounds a certain way and has certain stylistic hallmarks”. I then try to stick with the programme, and I think that’s a more European outlook.

Had you visited Berlin before writing ‘Dancing On The Berlin Wall’ and where did dropping in ‘Ode To Joy’ come from? Was it ‘A Clockwork Orange’?

No, I didn’t visit Berlin the first time until the 90s after reunification. The ‘Ode To Joy’ bit comes from it being the anthem of the European Union, and being a particularly idealistic piece, especially Schiller’s lyrics… lyrics… hmmm, that makes Schiller sound like Max Martin. Well, you know what I mean!

Another geographical Cold War reference came with ‘Saturdays In Silesia’, composed while Poland was under martial law?

Yes. The funny thing about that is the line “Got the number 8 bus. Took it to the Navy docks”. Of course there are no Navy docks in Silesia, which is landlocked. I had conflated two events from the Solidarity period in Poland: the Gdansk shipyard strike and the Silesian miners’ strike into one story! Of course I get constantly reminded of this, especially from Poles!

With this being an expanded reissue, as well as RATIONAL YOUTH’s debut non-album single ‘I Want To See The Light’ and B-sides like Coboloid Race’, there has been the opportunity to give a rare recording like ‘Citi Phosphore’ a chance to be heard more widely again? How do you look back on these recordings?

We were excited to be making records and had no realistic expectations of success. Also, the engineers we’d come up against in the studios we first recorded in had no idea what we were trying to do. Wonderful, magical times nevertheless.

What are your own personal favourite tracks or memories in the making of ‘Cold War Night Life’?

What I loved the most about making the record was our producer Pat Deserio. In contrast to my answer to your previous question: while Pat, who came from an Italian disco background, didn’t really understand how we did what we did, he didn’t care because he could hear the songs and he truly loved them, and he had so many old school record-making tricks up his sleeve, that it was always fun, and always a learning experience. If I had to pick favourite tracks, I guess I’d pick the two I mentioned before, ‘Close To Nature’ and ‘Just A Sound In The Night’. With the current socio-political climate, it might seem obvious but why do you think ‘Cold War Night Life’ still resonates with electronic music enthusiasts worldwide after nearly four decades?

I think it resonates still, especially with synth fans, because it is pure in its intent and in its execution.

It’s one of the first pop albums, made entirely with analogue synthesizers and human voices, from the era of ‘Reproduction’ and ‘Computer World’, certainly the first from Canada, probably North America.

Yes, it does seem relevant again, in terms of the current state of the world, but honestly on a musical level, I can’t be objective enough to evaluate whether musically it sounds dated or not, but here it is still, 37 years later, and with new life. In any case, I haven’t got sick of it yet.

ELECTRICITYCLUB.CO.UK gives its warmest thanks to Tracy Howe

is reissued by Universal Music worldwide on 30th August 2019 in double clear vinyl LP and expanded CD formats, as well as being available on digital platforms