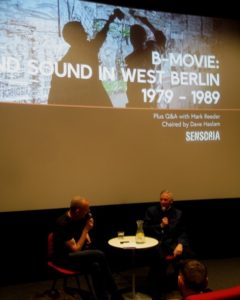 ‘B-Movie: Lust & Sound In West Berlin 1979 – 1989’ is an insightful new documentary about the music, art and chaos of the divided city before its infamous wall came down.

Starting with punk and ending with The Love Parade, anything seemed possible in a place that was unlike anywhere else in Europe. Using mostly unreleased footage, photos and original interviews, it tells the story of the cultural interzone from the view of MARK REEDER who also narrates the film.

Having made its UK premiere at Sheffield’s Showroom Workstation the previous night, the showing at Home in Manchester was attended by NEW ORDER’s Bernard Sumner.

It was Reeder’s long-time friend who gave him the Transcendent 2000 synth which he had built from a kit while watching Spaghetti Westerns on late night TV and used with JOY DIVISION. Also present were other figures from Manchester’s music scene such as Martyn Walsh from INSPIRAL CARPETS, A CERTAIN RATIO’s Jez Kerr, Alan Hempsall from CRISPY AMBULANCE and indie duo MFU.

Now best known as a remixer and for his iconic trance label MFS, Reeder left Manchester in 1978 to explore his passion for electronic music from Germany such as KRAFTWERK and NEU! Having visited Düsseldorf, his next destination was West Berlin, home of TANGERINE DREAM.

Iconised by DAVID BOWIE who recorded his ‘Heroes’ album at the city’s Hansa Tonstudio and the controversial film ‘Christiane F’, West Berlin was the satellite symbol of freedom and hedonism during The Cold War. Slap bang in the middle of the Communist governed DDR, it was occupied in three sectors by British, French and American armed forces while surrounded by The Warsaw Pact. 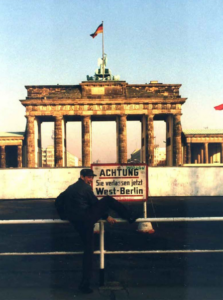 The first person Reeder encountered was a six foot six transvestite who was stacking shelves in a supermarket; he soon immersed himself in the vibrant tension of the city which became a breeding ground for the artistic avant-garde. ‘B-Movie: Lust & Sound In West Berlin 1979 – 1989’ is Reeder’s own journey as he finds himself working as Factory Records’ German representative, a roadie, a musician, a manager, a sound engineer and even an actor in video nasties!

Mark Reeder’s personal links with Factory Records and JOY DIVISION enabled him to bring the quartet over to play the one of city’s most notable venues Kant Kino. Although the gig was only attended by around 150 Berliners, it was to become highly influential on those present, while the band documented their experience in the shape of one of their last ever studio recordings ‘Komakino’.

All West Berliners were excused National Service while the city itself was cheap to live in, compared with the rest of the Federal Republic. The assorted circumstances allowed colourful, free thinking characters to evolve within the squats and communes. 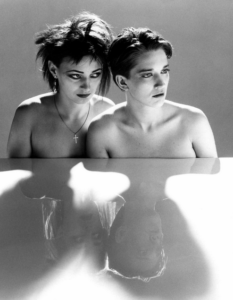 The inherent self-sufficiency aspect of life in West Berlin meant that performance art noise merchants such as MALARIA! and EINSTÜRZENDE NEUBAUTEN could exist, free from interference and commercial considerations. It was like “one massive band” in this Radikalinski scene.

This environment ultimately fuelled West Berlin’s notorious and decadent nightlife. On a visit with his band THE BIRTHDAY PARTY in 1982, Nick Cave became fascinated with the city and remained, crashing over at Reeder’s apartment in the process. But some of the less confrontational aspects of West Berlin did crossover into the mainstream with the success of NENA and her massive 1983 German language hit ’99 Luftballons’ in the US.

Meanwhile, as things started to get artistically stale in the city, technological advancement courtesy of samplers and the advent of club culture allowed DJs such as WESTBAM to make an impression. Reeder’s original vision of a Berlin engulfed by electronic sound was now actually becoming a reality. But while this was happening, politically, the times they were-a-changing…

The fall of The Berlin Wall is symbolised in the film by footage of David Hasselhoff singing his West German Schlager rock No1 ‘Looking For Freedom’ on 31st December 1989… ironically, no footage exists of Reeder during this period because he was on holiday in Ceaușescu’s Romania at the time! It was not just the end of Communist rule and East Berlin, but also the end of West Berlin and the unique enclave that had flourished in its own, idealistic manner.

Complimenting ‘B-Movie: Lust & Sound In West Berlin 1979 – 1989’ is the top notch soundtrack compiled by Reeder; as well as the local music of the period from MALARIA, DIE TOTEN HOSEN, DIE ARTZE and EINSTÜRZENDE NEUBAUTEN, there is more recent material from the likes of WESTBAM whose ‘You Need The Drugs‘ with Richard Butler is a recurring tune throughout the film.

Chaired by Haçienda DJ and noted cultural commentator Dave Haslam, the Q&A afterwards with Reeder was amusing and informative. 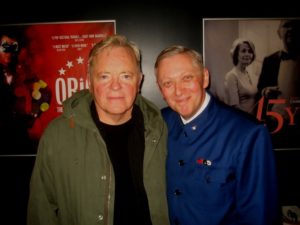 The first question came from Bernard Sumner, mischievously keen to bait the man who introduced him to Italo and New York disco – “Did you smuggle anything out of East Berlin… like Russian uniforms?”

Reeder shared a story on how after returning from a trip to East Berlin, he was attempting to smuggle a uniform through Checkpoint Charlie while his SHARK VEGAS bandmate Alistair Gray was hiding a bundle of red flag material, all unbeknown to Sumner. If caught, there was the penalty of exile to a salt mine in Siberia!

“I had a brand new East German uniform underneath my clothes… I looked like Arnie Schwarzenegger! The trousers were a bit long so I rolled them up!” recalled the Denton lad, “the border guard waved me through but then behind me, this bundle Alistair had broke open and cascaded all over the floor! I thought F*CK! As they dragged Alistair off, he was pointing and I looked down… this uniform trouser was sticking out”! Luckily for Reeder, two other men also passing the checkpoint started an argument so the guards’ attention was drawn on them and he got across the border unhindered.

Reeder also revealed his subversive activities in music had led to the East German Ministry for State Security aka The Stasi compiling a file on him. But instead of preventing entry, they always welcomed him so they could keep him under surveillance while he worked in a recording studio. 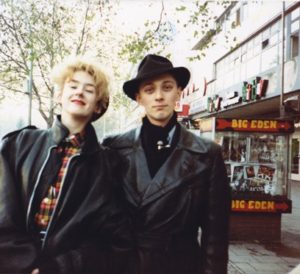 “They said I was out to corrupt the youth of East Germany” Reeder fondly remembered on being watched by The Stasi, “they even asked their spy in MI5 to correlate if I was working for them, because they thought I must have been working for somebody! I was making Western TV programmes like ‘The Tube’ and showing East Germany in a positive light, yet on the other side, I was smuggling in music and doing these secret gigs so they didn’t know where to put me! At one point, they even thought I was gonna try and break someone out of prison!”

It turned out a young punk who had joined Reeder’s circle was actually a Stasi undercover operative! “I better not have a Stasi file cos of you!” snorted Sumner playfully to roars of laughter from those present.

MARK REEDER’s life in West Berlin makes for a fascinating and enjoyable documentary that could be subtitled ‘An Englishman In Berlin’; yet ‘B-Movie: Lust & Sound In West Berlin 1979 – 1989’ only tells part of the story. Will there be a second instalment?

“Abwarten und Tee trinken” as they say in Germany 😉 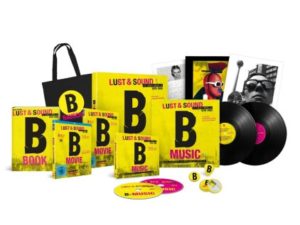 ‘B-Movie: Lust & Sound In West Berlin 1979 – 1989’ is released by Edel as a DVD and Blu-ray on 2nd October 2015, available through Amazon Germany. The film is also available to download via iTunes at http://apple.co/1ULinCv

The MARK REEDER single ‘Mauerstadt’ is available for download while there is also an accompanying ‘B-Book’ and a deluxe Gesamtbox containing all formats – further details at http://b-movie-der-film.de/b-kenner.html