May 5, 2021 / electricityclub / Comments Off on BETAMAXX Sarajevo 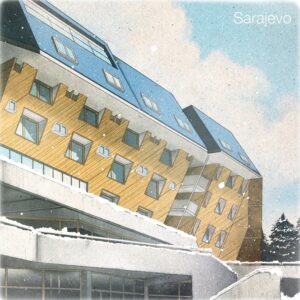 Like FM ATTACK, as one of the more accomplished figures in synthwave,  BETAMAXX explored goth and new wave on his most album ‘Lost In A Dreamworld’.

The musical vehicle of Pittsburgh based Nick Morey, the first BETAMAXX long player ‘Lost Formats’ came out in 2012.

Featuring VANDAL MOON, GLITBITER and MECHA MAIKO, ‘Lost In A Dreamworld’ was anything but and a confident affair boasting a catchy poptronic template with crossover potential. However, the new BETAMAXX record ‘Sarajevo’ is more reflective with no vocals or vocoder.

An instrumental concept album inspired by the Bosnian city that hosted the 1984 Winter Olympics, it was the games that made household names of skaters Katarina Witt, Scott Hamilton, Jane Torvill and Christopher Dean. At time, Sarajevo was part of the former Yugoslavia and had a chequered history as the starting point of the First World War. And eight years later, it found itself at the heart of the Bosnian War which lasted from 1992 to 1995 and saw the city divided in the longest siege in modern history.

Inspired by artists such as BOARDS OF CANADA, Morey has crafted a moody listening experience that takes a time machine back to that winter of 1984. As only the second Olympics held behind the-then Iron Curtain, there was much excitement in the city as Sarajevo celebrated its cultural co-existence with a spectacular opening ceremony. “It pays homage to its people, the athletes that competed, and aesthetics and design of the XIV Winter Olympic Games” said Nick Morey. 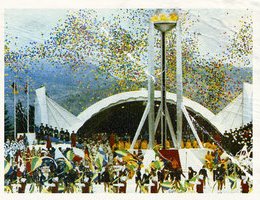 The opening drift of ‘Olympic City’ accompanies the poignant chatter of united children while the breezy ‘Winter Games’ provides punchy beats augmented by some quite funky synthbass and bright brassy tones. ‘Alpine’ follows along a similar path but is more AIR-like and sedate as it steadily embarks on a climb. On the decent, ‘Downhill’ is a something of a highlight in its building rhythmic exhilaration laced with the tension of ‘Stranger Things’ and archive TV commentary to celebrate Bill Johnson’s victory as the first American to win gold at an Olympic downhill skiing event.

‘Enchantment’ provides some rich haunting ambience but the stark backdrop of ‘Igman’ with its chilled beats aurally illustrate the brutalist architecture of the hotel designed by Ahmed Džuvić that provides the image to the album’s artwork and post-war now stands abandoned and derelict.

Meanwhile after some cascading arpeggios, the ‘Sarajevo’ title track morphs into a slice of shuffling Balkan dub echoing SABRES OF PARADISE before the ringing calls of ‘Horizon’ sculpt a downtempo journey towards closedown. With beautiful hints of Arvo Pärt’s ‘Spiegel Im Spiegel’, ‘Ceremony’ is a slow waltz embroiled in a moving melancholy with the knowledge that despite the collective optimism from hosting the games, the tragedy of war was to come. 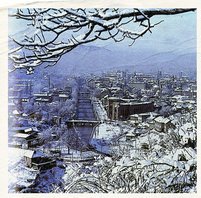 Harking back to an era when the Cold War would often be played out in the Olympics, ‘Sarajevo’ is like a soundtrack to a film yet to be made. With exquisite analogue sound design and an intuitive sense of atmosphere, ‘Sarajevo’ should open out opportunities into the film world for BETAMAXX.

Posted in Reviews Tagged with Betamaxx