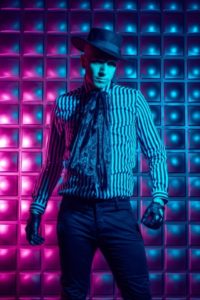 One of the songs of 2017 was the ‘Electro Version’ of AESTHETIC PERFECTION’s ‘Rhythm + Control’.

Continuing his industrial pop philosophy, the new AESTHETIC PERFECTION single ‘Ebb & Flow’ touches on the highs and lows of the heart; a superb slice of percussive electronic disco with its reverberant synth bassline, ‘Ebb & Flow’ even utilises a Talk Box, an effect famously used by BON JOVI on ‘Living On A Prayer’ and PETER FRAMPTON on ‘Show Me The Way’.

However, the biggest surprise is the single’s B-side, a cover of NSYNC’s ‘Bye Bye Bye’ which affirms the suspicion that Daniel Graves is indeed the love child of Justin Timberlake and Marilyn Manson! Featuring Nikki Misery from alternative metallers NEW YEAR’S DAY on guitar, the tune is slowed down to stark ballad with Graves showcasing a natural emotive singing voice not that far off Darren Hayes from SAVAGE GARDEN.

Preparing for an upcoming tour of Germany and Russia, Daniel Graves kindly took time out to chat about how his singles only policy is progressing and working with other artists from its resultant artistic freedom… 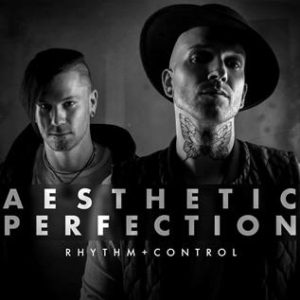 A year on, your singles only policy appears to be working for you?

We’re about 18 months into my little experiment here. While I remain convinced that singles are the way of the future, and physical media a thing of the past, I’ve learned a lot that has humbled me to the ins and outs of the industry.

In the past, I think I took the work of labels and managers too much for granted. I didn’t bear the burden of my own success enough. I believed my only job as an artist was to create, and it was the other guy’s job to make me successful.

When the band went 100% independent at the end of 2015, I learned very quickly that an artist’s success is almost entirely dependent on themselves. Labels and managers are there to provide funding and logistical support, but beyond that, everything is up to the artist. EVERYTHING.

That gave me a new appreciation for the work my previous colleagues did on my behalf. I’m sure I made the right move, but having done the work myself, I appreciate those guys so much more than I ever did.

That said, things are going great!

‘Rhythm + Control’ was a triumph and ELECTRICITYCLUB.CO.UK particularly loved the ‘Electro Version’… a cross between Darren Hayes, Britney Spears and Marilyn Manson we said… what was the genesis of the song?

‘Rhythm + Control’ was really just an experiment that ended up working. The goal was to cram as many features into one song and have fun with it as possible. I think we succeeded in that respect. I go deep into the backstory on the episode of ‘Tone Deaf’ where I break down the song and show you how it was made. In short, though it was quickly written backstage in Germany with the intention of turning it into a WILLIAM CONTROL track. Will didn’t have the time to finish it himself, so I took the reins and made it what it is today!

Check out the ‘Tone Deaf’ episode for all the gory details.

Will guitars be featuring more prominently in AESTHETIC PERFECTION in future as they did on the single version of ‘Rhythm + Control’?

AESTHETIC PERFECTION will never go down the path that many industrial bands have where adding guitars is equated with evolution. Everyone’s done it, so I don’t need to. As I mentioned, ‘Rhythm + Control’ was all about utilizing as many other artists as possible to create something I never would have on my own. So no, it’s not likely that you will hear that kind of music from me in the future.

That said: I’ve always been open to using whatever tools get the job done. If you remember, ‘Showtime’ is a song driven by bass and acoustic guitar and the backbone of ‘Big Bad Wolf’ is also a bass… so I’m not afraid of using live instruments as long as they serve a purpose in the song.

At the moment I’m working on new music with a producer friend and we’re using a lot of guitars. How much of those guitars that make it to the final version is hard to say. How many of those songs that will see the light of day is also hard to say… time will tell! 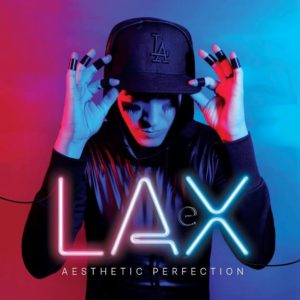 NYXX is an up-and-coming star, she sang with you on ‘LAX’ and ‘Rhythm + Control’, how did you discover her and how do you assess her potential?

‘LAX’ was meant as a vehicle to introduce her to my fanbase. She’s not actually singing in the song, rather, she’s featured in the video and speaks the poem at the beginning. It’s great because lots of her fans click on the song expecting to hear her singing, and when they realize she isn’t, they write nasty comments about how I’m attempting to piggy back off her fame by using her as a prop in my video. It’s quite hilarious. It’s sort of true, but funny nonetheless.

Anyway, I met NYXX simply because she wrote me an email! She was looking for a new producer and, as fate would have it, I’d been actively looking for a female vocalist to produce. She had a showcase at The Viper Room that I attended and I saw something special in her. A killer look, a unique sound and a drive for success. To find all those qualities in one person is rare. I decided at that moment that we had to work together. I don’t actually believe in fate, but it was a lovely coincidence that worked out for the both of us.

What was your collaborative process on her new single ‘Voodoo’?

When NYXX and I work together, it’s a totally collaborative process. She usually brings me musical or lyrical ideas and once something clicks with me we immediately jump in and power through. The final result is almost never anything like what we started with, but that initial spark is necessary to get the ball rolling.

For ‘Voodoo’, NYXX wanted to keep with her evil seductress vibe, but I wanted to switch it up and show people the person that *I* know. Someone human. Someone good. So I crafted a narrative about an innocent woman mired by rumors and accusations. NYXX twisted that to tell a story that’s much more vague. We never know if the woman in the story is a witch or not, and I think that makes it very compelling and cool. It’s that creative back and forth that helps us refine our concepts into something truly special. 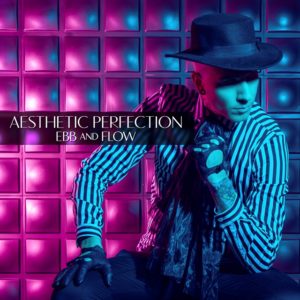 What inspired the AESTHETIC PERFECTION new single ‘Ebb & Flow’ and what was your approach to recording it?

Life is full of ups and downs. Highs and lows. Ebbs and flows. Sometimes when one aspect of your life is doing wonderfully, another is falling apart. This notion hits especially close to home right now, so I wrote a song about it. My approach was no different than it always is: The song comes first. The production second. I sit down with my guitar or in front of my keyboard and write out something that resonates with me emotionally and then I try putting it all together.

If that all works, then it goes into the computer to become a finished production. The most important thing, tho, is that it works even when you strip away all the studio magic.

You did a great New Year video ‘Top Ten Rules of the Road’ as part of your ‘Tone Deaf with Daniel Graves’ series… it hit the nail on the head and told some home truths, as did your ‘Ten Commandments for New Bands’ 😉

I get f*cking INUNDATED with requests from people asking me how to start a label, survive the road, make money, produce a song… whatever. I created ‘Tone Deaf’ as a way of sharing my knowledge with those people and, hopefully, helping them find their way.

Full disclosure: I’m not an expert. I’m not educated or qualified to be telling people what to do. My advice should be taken with a grain of salt. However, I *have* been in the game for a long time and feel like maybe some of my insights could be useful. When I started, no one was there to tell me this stuff and I think I made a ton of mistakes because of it. Maybe I can save a few people the embarrassment / headaches / stress I had to endure…

Art is only abandoned, never finished?

As true today as it ever was!

How is the rest of your new material coming together, there’s plenty going on worldwide to inspire you?

I tend to draw my influences from my own life as opposed to the world at large. It’s not to say that I exist in a vacuum, I certainly don’t, and what’s going on, on the geopolitical stage affects me deeply. However, I do my best to speak about the general nature of the human experience rather than specific world events. I prefer art that isn’t hindered by time or borders, if you catch my drift.

That said, I have a ton of new material and I’m always pondering the best ways to unleash it upon the world. I promise you it’s not terrible and you’ll hear it one day. 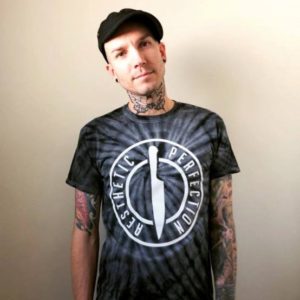 Despite your singles only policy, are you still under any pressure to release this new material in traditional physical formats like vinyl?

I’m constantly at odds with my audience about my methods and artistic philosophies. I wouldn’t want my fans to agree with me all the time, anyways, because conflict is the spice of life.

If they just ate up everything I said and did our relationship wouldn’t mean as much as it does. The fact that they push back against me and make me reflect on myself and my choices is something I appreciate.

What’s next for AESTHETIC PERFECTION or your work with other artists?

Oh, you know me, I’ve always got somethin’ cookin’…

‘Ebb & Flow’ is available to download as a three track bundle including ‘Bye Bye Bye’, along with all the previous singles from http://aestheticperfection.bandcamp.com/