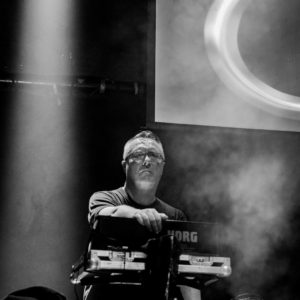 After a very generic but entertaining DAF / NITZER EBB-aping set from Germany’s TENSION CONTROL, the London crowd started to fill out for the co-headliners.

According to DIE KRUPPS main synth man Ralf Dörper, the headliner position was decided on a coin toss, with FRONT LINE ASSEMBLY taking the main slot in London. Without wanting to resort to too many cliches, DIE KRUPPS are now a well-oiled maschine.

With new drummer Paul Keller on-board, the act are a fearsome live proposition. After a short intro, the band launched into ‘The Dawning of Doom’ from the 1992 album ‘I’ with frontman Jurgen Engler stalking the stage flanked by the twin guitar attack of Marcel Zurcher and Nils Finkeisen.

There was an early outing for the band’s excellent cover of VISAGE’s ‘Der Amboss’; the last time the band played the UK, they were joined by DUBSTAR’s Sarah Blackwood at The Garage in Highbury, but tonight the band carried the song without her. The song saw the first usage of Engler’s metal pipe bashing, which helped give the act an added layer of visual appeal to a band who are already transfixing live. 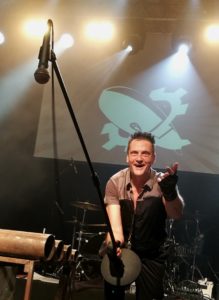 With a set spanning the band’s 28 year history, it was clear to see how incredibly influential DIE KRUPPS have been on acts such as RAMMSTEIN with their mixture of brutal guitars and hard sequenced electronics. The 2013 album ‘Machinists of Joy’ was well represented tonight with three tracks ‘Schmutzfabrik’, ‘Robo Sapien’ and ‘Machineries of Joy’ all getting an outing.

The biggest reception was reserved for 1993’s anthemic ‘To The Hilt’ and encore ‘Bloodsuckers’, both from ‘Die Krupps II – The Final Option’. As with fellow compatriots RAMMSTEIN, it would be lazy to overthink the band’s imagery and song content, so to reinforce this Engler made a point of announcing ‘Nazis Auf Speed’ as an “another anti-Fascist song”.

By the climax of the set, Engler had climbed on top of his metal percussion, was waving his microphone stand into the audience and had the Islington crowd eating out of his hand.

The stage was eventually cleared for Canadian headliners FRONT LINE ASSEMBLY, who in comparison to DIE KRUPPS were a very different proposition; more electronic in conception (after a period during the career of using guitars and guitar samples), they now function with a double synth station set-up covered in camouflage netting and a couple of tom drums set-up in front of the main drum kit. 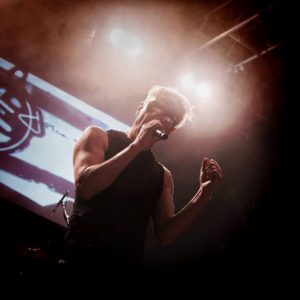 After DIE KRUPPS’ blitzkrieg assault, FRONT LINE ASSEMBLY took a while to warm-up the crowd.

With frontman Bill Leeb seemingly a little aloof, the band still generated a hypnotic and danceable set with the sequenced electronics and vocal samples more to the forefront.

After opening their set with an untitled new track, the uptempo ‘Shifting Through The Lens’ with its vocodered vocals and tightly sequenced synths was a highlight along with the glitchy EDM-inflected ‘Killing Ground’.

The usage of additional live percussion by Leeb and Rhys Fulber helped with the act’s visual appeal, although it became apparent during their set that there were a few technical issues resulting in exchanged glances and conversations between the two musicians. 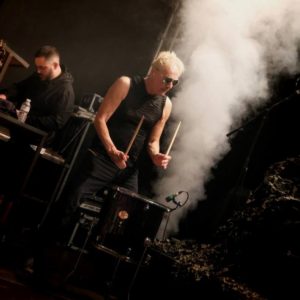 The overrun meant that FRONT LINE ASSEMBLY had to forego their encore and eventually ended their set with the eponymous title track from 1994’s ‘Millenium’.

On tonight’s showing, the price of admission would have been worth it just for the DIE KRUPPS stellar set, but to have both of these bands on the bill made it a really attractive live proposition for those that love their industrial music.

There really is no excuse to miss this superb double-header and a chance to catch not one but two legendary and influential acts from the EBM scene.

With special thanks to Ralf Dörper