August 22, 2020 / electricityclub / Comments Off on ERASURE The Neon 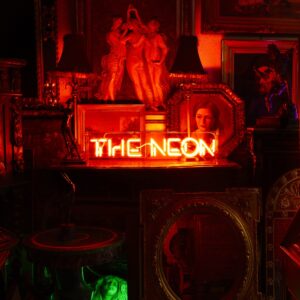 While ‘World Be Gone’ brought a somewhat sombre mood to the ERASURE stable, the expectations for the opus number 18 were mixed.

To the hardcore fans of the Bell / Clarke combo, ‘The Violet Flame’ remained the best contemporary production from the twosome with many not too appreciative of the more reflective offerings contained on the 2017 album.

comes about at the right moment to celebrate the achievements of Vince Clarke who received the Special Recognition Award from the Association of Independent Music.

Recorded in Brooklyn and Atlanta and mixed in London, ‘The Neon’ refreshes the pair’s love for great pop, which is what they have relentlessly been offering for decades, never letting down, never disappointing. With 2020 certainly being the year that will go down in history, it needs a strong pick me up and that’s where the shiny sparkler comes in.

The album is heralded by ‘Hey Now (Think I Got A Feeling)’ which, while not being the strongest ever single, does a great job introducing the newest material, harking back to the quintessential ERASURE sounds. ‘Hey Now’ has enough passion and positivity to lift the moods and set the stage for more colourful offerings and the following song ‘Nerves Of Steel’ does not disappoint.

Accompanied by superb video featuring 20 LGBTQIA+ stars, some known for their appearance on ‘RuPaul’s Drag Race’, the song oozes positivity and love. Andy Bell claims this to be his favourite track on ‘The Neon’ and it is plain to see why.

Beautifully composed and expertly written, with a superbly executed bridge which slides seamlessly into the catchy chorus, the songwriting genius shines through, reminiscent of some chosen gems from the ‘Cowboy’ era. ‘Fallen Angel’ ushers in an urgent, bumpy synth, rhythmically canvassing the beauty of Bell’s vocals, who’s trying “all of the things that give (him) love”. 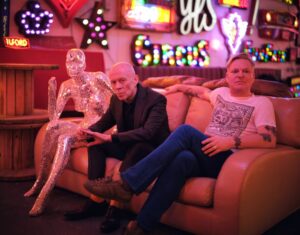 Faster and fuller, ‘No Point In Tripping’ is a positivity pill necessary to survive the bizarre times we live in, while ‘Shot A Satellite’ is a memory lane journey through the years of ERASURE. Bell sounds as fresh as ever, proving his singing prowess once again.

This is a stance that is continued on ‘Careful What I Try To Do’ with its melodic bass and magical synth play; Clarke is at his best here for sure. Some haunting piano on ‘New Horizons’ paints the picture of hope and positivity in love, a ballad that Bell sings to a lover and not that dissimilar to their massive ‘Home’ from ‘Chorus’, but stripped down and adapted to the new reality.

The opus closes with poignant synth gem of ‘Kid You’re Not Alone’ which sees Bell playing with his vocals over a gentle melody, enveloping the listener into a warm summer embrace of hope, love and freedom from judgement. 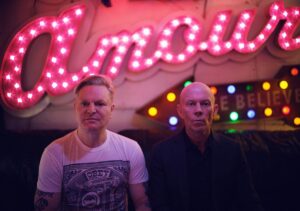 With Clarke finally recognised for his genius and Bell continually proving to be one of the best vocalists and songwriters, 35 years later, the duo still provide the magnificent sonics and sparkling electricity laced with the voice of an angel.

If you need a pick me up entwined with a trip down memory lane, look no further; ERASURE have got you.

is released by Mute Artists in a variety of formats