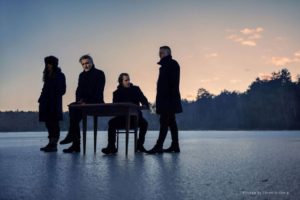 in 2016, but EXIT NORTH began in 2014 when the pair enlisted the talents of Ulf Jansson and Charles Storm.

, a captivating collection of nine songs seeded in Gothenburg and swathed in a variety of wintery instrumental colours including piano, synthesizer, trumpet, harmonium and a string section conducted by Mikael Backegård.

‘Book of Romance and Dust’ is a quality recording that also sees Steve Jansen, who first found fame as a member of JAPAN, returning to drums and percussion following the more ambient nature of his last two releases ‘The Extinct Suite’

. He kindly chatted about the genesis and realisation of EXIT NORTH.

How did EXIT NORTH come together as a project?

In 2014 I asked Thomas how he felt about working on a more long term collaborative project with the hope of putting out an album together. His response was positive and since he’d begun writing with Ulf on piano, it seemed like a good idea to pull resources and make it a ‘band’ project.

Later Thomas had the idea to ask Charles to join us. Charles, a popular producer in Sweden, had already worked with Ulf for various sessions and he and Thomas had known one another since their first meeting at a show I performed in Sweden many years earlier.

‘Book Of Romance and Dust’ has had a long gestation period…

Yes, although if you condense the amount of time we actually spent on the making of the record, it would probably be around 3 months work. We each had other commitments and it wasn’t easy to move things forward at a regular pace. But the periods of stagnation were ultimately productive since we were able to re-evaluate more and take one another’s ideas onboard. It sounds the way it does because it took 4 years to complete and I wouldn’t want to change that.

In terms of the compositional dynamic, how often were you able to work together in the same room and what elements could you leave to more remote processes?

I made numerous trips to Gothenburg so that we could record together but after the piano parts were recorded, much of the initial arrangements were dealt with remotely. It’s pretty common these days to exchange audio stems and work on overdubs in the comfort (and affordability) of your own workspace. But we wanted to include a lot of real instruments and performances and because Charles has his own studio in Gothenburg which is fully equipped for live recording, we were able to make the best of both worlds. 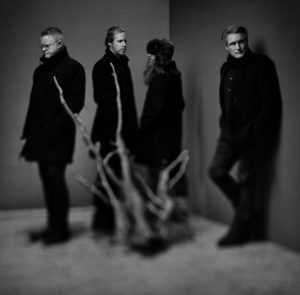 Despite being a band project, ‘Book Of Romance and Dust’ does have this amazing forlorn quality about it…

I think it’s simply a matter of each of us being on the same wavelength musically. As is often the case with makers of ‘serious’ music, we’re not forlorn characters by any stretch of the imagination but we are sensitive to, and appreciative of, those more weighty emotions we all carry within us and if we can represent some of that stuff in music without boring everyone to tears then it’s a worthwhile exercise. I don’t think it’s something you can achieve very well when you’re still in your youth, so it makes sense to play to your strengths the older you get.

Much of the music is very cinematic, was there any particular approaches or influences that pointed it in this direction?

Much of the material derived from Ulf’s piano parts and as you can hear he is always introducing melody lines with the chords, and Thomas’ vocals follow different melodies, so as a listener you’re registering more than just the one melody line. There has to be ample space in the music to allow for this and so we managed to strip away anything superfluous and allow the music to breathe. The use of strings help to embellish these melodies and I think perhaps this combination might suggest a cinematic quality.

Thomas Feiner’s vocals have that distinct aged resonance which suits this type of material?

I think Thomas’ voice has a tremendous amount of gravitas and resonance and his delivery is better than most native English singers. I feel very fortunate to be working with someone this good. 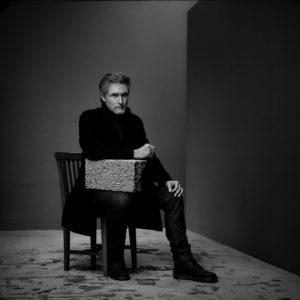 What was it like for you to be back involved in songs and playing percussion after your more recent ambient releases?

Great. I’ve missed the experience of being in a group and sharing responsibilities whereby each member focuses on those elements that best serve the recording. There’s a tremendous level of diplomacy in the group and we all played a variety of instruments, some of which we’ve not bothered to credit as it would just look daft. And writing lyrics for songs with beautiful melodies provides a wonderful sense of job satisfaction.

Opening song ‘Bested Bones’ is quite a haunting number with some lovely strings and mysterious tones of brass?

This particular song was one that Thomas and Ulf worked on prior to the four of us teaming up. I think it demonstrates well how the two of them dance around one another melodically. All the strings on the album were added towards the end of the recording sessions and were very much the icing on the cake.

The acoustic elements on the album have a wonderfully airy touch about them, how did you set about achieving this during recording?

The sound of the record is down to Charles and his skill at recording and mixing. He worked tirelessly at making the very best of each and every process of the recording, since this project was so important to him.

Yes, it’s the most dynamic track on the album. After adding some brass type bursts to the chorus, it set the path to becoming much more aggressive and bombastic. It’s one of those tracks that found its place without any of us seeing it coming. 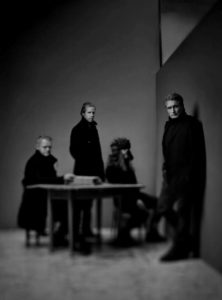 ‘Lessons In Doubt’ has a rich timeless European feel… it would seem that this album has no real influence from across the Atlantic, had that been a conscious decision?

‘Lessons In Doubt’ had a working title of ‘The Russian’ because of the piano melodies. We all like this flavour. For such a simple sounding track it took a lot of work, but the string arrangement and percussive detail really added to that Bolshevik twist. I think it’s fair to say this isn’t an American sounding record which wasn’t a conscious decision, but to be honest I can’t recall ever making an American influenced album.

That didn’t occur to me but it’s a fair enough observation and now that you mention it, I can see what you mean.

The emotive and shimmering two parter ‘Losing’ with Anna Bylund’s angelic soprano counterpoint from   to Thomas’ hum conveys exactly what the title suggests?

The lyrics refer to looking after that which is fragile. I wouldn’t want to describe specially where the inspiration comes from but if that image is relayed then I’m pleased about it.

Who do you hope EXIT NORTH will appeal to?

Ideally anyone who can draw deeper emotions from music but I know that not everyone needs that. I certainly don’t but that’s because I spend too much of my time working on it.

ELECTRICITYCLUB.CO.UK gives its grateful thanks to Steve Jansen 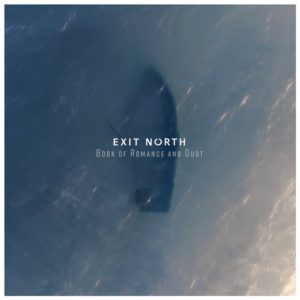 ‘Book Of Romance and Dust’

is released via Bandcamp as a CD and download on 1st October 2018, pre-order from https://exitnorth.bandcamp.com/releases