July 4, 2014 / electricityclub / Comments Off on KID KASIO & THE SANFERNANDO SOUND Letters Of Love 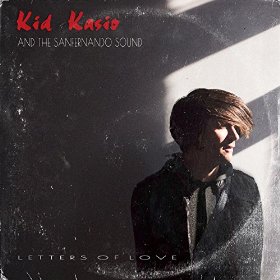 KID KASIO and THE SANFERNANDO SOUND have released the fruits of their recent studio collaboration as a single called ‘Letters Of Love’.

It was launched with a superb ‘Our Price’ pastiche TV advert and the first new material from Da Kid since his debut album ‘Kasiotone’ in 2012. KID KASIO is the brainchild of Nathan Cooper, one-time member of THE MODERN who had a Top 40 hit ‘Jane Falls Down’ in 2005 while THE SANFERNANDO SOUND is the moniker of Jason Persad who first came to wider attention with his remix of ‘Clouds’ for flamboyant duo DIVINE KNIGHTS.

Written via email over a period of a couple of months last year, ‘Letters Of Love’ features a video that looks like a long lost VHS tape of a forgotten artist performing on an old Italian TV show.

“This video was edited by a talented CGI expert called Ed Crofts who came forward when I put out a plea on Facebook for ‘someone who can stitch my head onto someone else’s body’!” said Cooper, “I wanted the video to look like It was I filmed my head in front of a green screen and Ed placed it onto the performer’s body, I think the end result looks pretty otherworldly”.

Indeed, KID KASIO looks like a strange amalgam of Russell and Ron Mael aka SPARKS. But Cooper remained coy as to who the source material was: “I won’t tell you who the torso belongs to in the video, he may not be too pleased that I’ve nicked his body!!!”. With hints of Stock, Aitken & Waterman in the percussive intro and backing, ‘Letters Of Love’ is a natural progression on KID KASIO’s brassy optimistic synthpop.