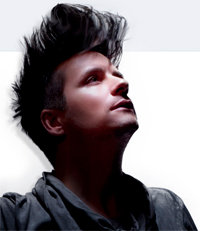 KID KASIO is Nathan Cooper, one-time member of those once great white hopes THE MODERN aka MATINEE CLUB who in their time, supported HEAVEN 17.

Anyone who has ever heard their album ‘Modern Industry’ will only be too aware of Nathan’s vocal and songwriting talents on brilliant songs such as ‘Jane Falls Down’ and ‘Sometimes’, which incidentally were produced by the legendary Stephen Hague. With all this experience under his belt, Nathan now writes and produces all his music as KID KASIO from his South East London studio with guitarist Ben Todd and bassist Glenn Bridges occasionally helping out.

His most recent offering ‘The Reason’ is a superb slice of candy flossed synthpop with an edge. Coming over like a cross between THE CURE and ERASURE, it is accompanied by an affectionate Top Of The Pops homage video featuring Peter Powell and a few moves borrowed from TALKING HEADS’ Toni Basil choreographed promo for ‘Once In A Lifetime’.

Of KID KASIO’s other material so far, both ‘Not For Turning’ and ‘Living My Life’ are fine examples of bouncy riff laden ditties with catchy choruses reminiscent of imperial phase DURAN DURAN. Taking the route of acts such as LA ROUX, HURTS and MIRRORS in updating the ‘Synth Britannia’ template for the next electro generation, KID KASIO’s vintage but modern flavoured sound heralds a new era for one man and his synth.