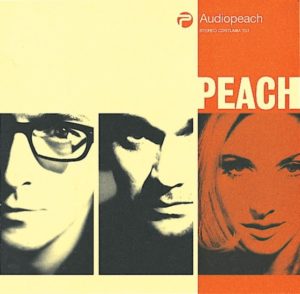 The concept of PEACH was “ABBA meets THE KLF”. Released on Mute Records in September 1997, ‘Audiopeach’ is one of those synthpop albums that has been lost in the midsts of Cool Britannia.

The trio had been slowly building a profile, having supported ERASURE, based on the musical reputations of their two instrumentalists Pascal Gabriel and Paul Statham.

The pair had met during the recording of ex-BAUHAUS singer Peter Murphy’s solo album ‘Cascade’. Gabriel worked with BOMB THE BASS, S’EXPRESS and EMF.

Meanwhile Statham was the Goth icon’s writing partner and had been the guitarist with B-MOVIE. Led by Steve Hovington, B-MOVIE were a band with so much promise that their then manager Stevo of Some Bizzare Records fame was able to include the then unknown SOFT CELL as part of the conditions for Phonogram Records to sign the Nottingham quartet in an innovative ‘2 for 1’ deal! Completing PEACH’s line-up was blonde South African born singer and dancer Lisa Lamb who Gabriel and Statham had met at an art exhibition in London.

Released in 1996, first single ‘On My Own’ was classic pop for the modern era. Lisa Lamb’s vocal delivery echoed Belinda Carlisle going electro while the vibrant backing took the dance sound of the times into a song format. Although failing to capture the hearts of the British public, ‘On My Own’ was later crucially chosen for a key scene in the Gwyneth Paltrow film ‘Sliding Doors’ which incidentally was directed by Peter Howitt, the actor who played Joey Boswell in the sitcom ‘Bread’!

This eventually led to the song entering the US Billboard Top 40 in 1998 where the band had to be renamed PEACH UNION for the North American market. The follow up single ‘From This Moment On’ is a truly lost jewel. Mid-paced synth pulses accompanied by Lamb’s cutely processed “do-do-do” vocals coupled to a tremendous tune in the Bacharach and David tradition unfortunately went over the heads of most. As a result, the album was delayed until 1997.

was a lovely, lushly produced album. The standout track is ‘Deep Down Together’ a frantic spacey Eurostomper in the vein of SPARKS’ ‘(When I Kiss You) I Hear Charlie Parker Playing’. With throbbing hints of ‘I Feel Love’, it is seasoned with some wonderfully distinctive vocal ad-libs from the late Billy MacKenzie. He pops up again on the NEW ORDER-ish ‘Higher Ground’ which offers some love technique while on their final single ‘Sorrow Town’, the trio go all poptastic. 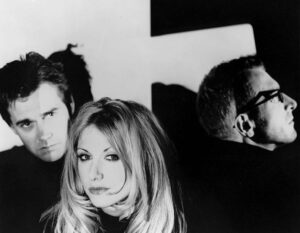 An intended single release of the very pretty ‘Made In Vain’ was abandoned for a reissue of ‘On My Own’ following its North American success which was then met with ambivalence, reaching only No67 in the UK charts.

The beautiful album closer ‘Hush’ recalls PET SHOP BOYS more reflective moments, although Lamb’s voices gives it some soulful intensity sounding not unlike Tennant and Lowe’s compositions for Dusty Springfield’s ‘Reputation’ album. Of the other tracks, ‘Perfect World’ is a pleasant electro-acoustic excursion similar to Bernard Sumner and Johnny Marr’s side project ELECTRONIC.

Driven by a chunky bass triplet, ‘Tell Me’ has a club-friendly feel while continuing in that mood, ‘Give Me Tomorrow’ is punctuated by the chunky Italo House piano of the times.

Unlike the other one girl / two guy electronic based acts of the day like SAINT ETIENNE, DUBSTAR and ONE DOVE, PEACH were too obviously electronic to attract the support of a media drunk on Britpop and not consistently dancey enough attract a club following. Unfortunately for their few admirers, there would be no second album. 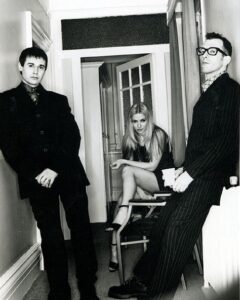 Put in simple terms, ‘Audiopeach’ was under appreciated and happened to be ten years ahead of its time.

Despite the unfortunate timing, PEACH laid the foundations of a sound that would become widely accepted by the late-noughties.

Since PEACH disbanded, Gabriel and Statham continued their partnership for a number of years, writing and producing songs for a variety of acts including Dido, Dot Allison, Kylie Minogue and Rachel Stevens.

More recently, Gabriel has successfully collaborated with LADYHAWKE, LITTLE BOOTS, MISS KITTIN, GOLDFRAPP and MARINA & THE DIAMONDS, while Statham has worked with THE SATURDAYS and Sarah Nixey

Lamb founded a sonic branding company called Sonicsista, creating audio identities for clients such as T Mobile, AT&T, Ben & Jerry’s and Disney. In late 2009, she performed two PEACH tracks ‘From This Moment On’ and ‘Sorrow Town’ at a special one-off performance in South London.

is still available on CD via Mute Records

WE HOPE YOU ENJOY OUR NEW DIRECTION