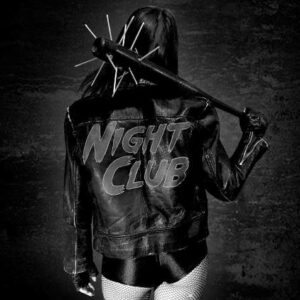 LA based duo NIGHT CLUB launch their forthcoming debut album ‘Requiem For Romance’ with their most provocative musical offering yet.

Entitled ‘Bad Girl’, it is perhaps less Britney and more Gaga in its approach with the use of vocal pitch shift adding a particularly sinister air to proceedings.

The duo of Emily Kavanaugh and Mark Brooks said: “‘Bad Girl’ is the first single from our upcoming full length debut. Our live sound has always been more bombastic and aggressive than our recordings so this time around we wanted to fully capture that sound”.

Following their best body of work so far in 2014’s ‘Black Leather Heart’, ‘Bad Girl’ is a startling progression that harks back to Brooks’ rock roots and his love of bands like SLAYER. The monochromatic visual accompaniment to the single sees the duo out in the desert, with Brooks running his synth on solar power while Kavanaugh ably takes on the role of leather clad rock chick.

As well as the new NIGHT CLUB album landing this Autumn, Kavanaugh will be lending her voice to ‘Evermore’, a song for Rusty Egan’s upcoming ‘Welcome To The Dancefloor’ project co-written with Chris Payne, best known for his work with GARY NUMAN and his compositional role in VISAGE’s ‘Fade To Grey’.

‘Bad Girl’ is available as a download single via Bandcamp, iTunes and Amazon.

NIGHT CLUB’s other EP releases ‘Night Club’, ‘Love Casualty’ and ‘Black Leather heart’ are available from their Bandcamp at http://nightclubband.com/