Although on the surface, things have appeared to be relatively quiet in the NINE INCH NAILS camp, the core duo of Trent Reznor and Atticus Ross have over the last few years been busy working on soundtrack material. 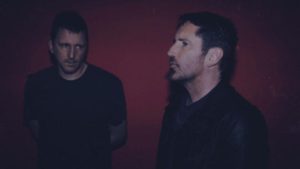 This included providing a superb score for the Boston marathon bombing film ‘Patriots Day’ and the pair are currently working on music for the upcoming Ken Burns documentary ‘The Vietnam War’.  Since providing the Oscar winning soundtrack to the ‘The Social Network’, this sidestep into film music composition has been a lucrative and creative outlet for the band.

But all this has been at the expense of releasing material for their day job with NINE INCH NAILS. So now following the release of the ‘Not The Actual Events’

EP back at the cusp of 2017, Trent Reznor has followed through with his promise to deliver a trilogy of EP releases this year with the announcement of the second one ‘Add Violence’

and its lead-off track ‘Less Than’. Whereas the previous release was certainly dark and musically satisfying, it lacked a definitive stand-out track with the sort of killer chorus that Reznor had previously delivered with tracks such ‘The Hand That Feeds’ and ‘Only’.

Track number one of five, ‘Less Than’ is certainly one of the most commercial tracks that NIN has released in a while, accompanied by a hypnotic retro video game-inspired video, the song is a satisfying combination of analogue sequencers, a SISTERS OF MERCY inspired programmed drum pattern (see ‘Dominion’) and most importantly, a BIG hooky chorus.

Worthy of a mention is the urban legend surrounding the video game ‘Polybius’; featured in the NIN promo; in 1981 an arcade version of the game was supposedly produced by the US government as a tool to test reaction times for the potential recruitment of military personnel. More sinister are the accusations that the game itself could induce seizures and brain aneurysms after multiple plays, a backstory which neatly lends itself to the lyrical content of the NIN song.

, to the point where there are lyrical and structural similarities with ‘Copy of A’ from that album. Long-term fans of the band will undoubtedly welcome ‘Less Than’ like a long lost friend and it certainly showcases Reznor’s continuing ability to still be able to construct more single-like material.

After the opening gambit of ‘Less Than’, second EP track ‘The Lovers’ throws in a considerable curveball by stripping things back with a glitchy rhythm track and an underpinning hypnotic analogue sequencer part. A slow burning piece, the song gradually bleeds into the consciousness after a radio EQ’d Reznor vocal acts as an unconventional verse segment. The soaring “take me into the arms of the lovers…” chorus provides a great hook for the track which could be best described musically as an ambient MASSIVE ATTACK.

‘This Isn’t The Place’ centres around a waltz-time analogue drum pattern, piano figure and synthetic drones; its opening two minutes or so fools you into thinking it’s going to be an experimental instrumental before an upfront Reznor vocal intones “And if you see, my friend. I thought I would again. A single thin straight line. I thought we had more time”. In some quarters this song has been interpreted as a eulogy to DAVID BOWIE (who Reznor worked with) and it showcases one of his most emotional and intimate vocal deliveries. 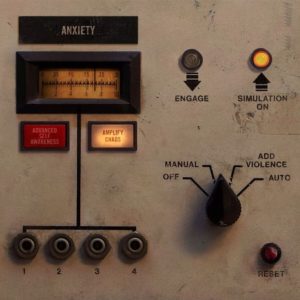 After the soft-ish verse part of fourth track ‘Not Anymore’, the chorus hits the listener with an abrasive wall of sound; akin to being caught in an audio firestorm, this is NIN at their most aggressive and will satisfy fans of their earlier work on confrontational albums such ‘The Downward Spiral’

‘The Background World’ takes the listener on a trip over its eleven minutes, and is the most sequencer-driven and electronic track on the EP. The first five minutes are darkly melodic but the final six is built around a progressively degrading and deliberately out of time looped song section.

The climax of this EP could be seen as a metaphor for human existence, repeating certain things daily until the individual becomes worn down and ultimately broken. The outro to ‘The Background World’ is arguably one of the most extreme and post-apocalyptic endings to a piece of music; by the end of the eleven minute mark, there are barely tiny shards of the original loop audible and when it finishes there is an incredible sense of release.

There is a bit of everything in ‘Add Violence’ to satisfy most long-term NINE INCH NAILS fans, it back-references eras of their previous work, but at the same time still remains a fresh and challenging experience. Listeners seeking a melodic fix may find it hard to skip past opener ‘Less Than’, but those who wish to be taken out of their comfort zone should experience the EP as a whole.

is available in various formats from https://store-uk.nin.com/collections/music