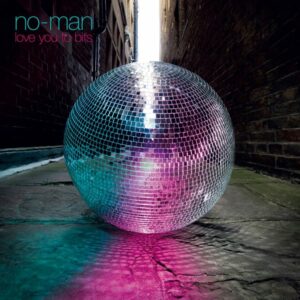 More than a decade since their last release NO-MAN return to their more synthetic roots with the new album ‘Love You To Bits’.

and is bound to throw anyone more familiar with the later recorded output from Messrs Bowness and Wilson.

The mirrorball on the sleeve should give a clue to the content within, but this is not fluff piece but a work of real depth and substance.

That said, anyone who only know the band from their later output may need to triple check the credits to ensure this is the same team that brought us tracks like ‘Truenorth’. From the opening portentous drone to the 808 style percussion and arpeggios running counter to the main synthetic melody line, it’s clear this is a very different beast from the last album ‘Schoolyard Ghosts’.

One thing that has remained from that release is Tim Bowness’s melancholic vocal. Possessing one of the most distinctive voices in modern music. the delivery throughout the album is spot on. Though split into 5 sections each, ‘Love You To Bits’ and ‘Love You To Pieces’ could be viewed as 2 long form remixes which utilise differing instrumentation to add light and shade of tone to the music. 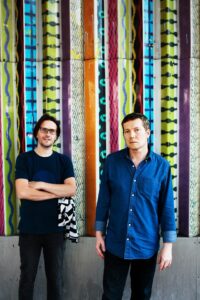 One thing that is clear is the influence of Bruno Ellingham who has been tasked with the final mix is writ large on this release. The same sparkle he gave the likes GOLDFRAPP is obvious with the separation around the instruments giving the overall pieces room to breathe.

The opening section of ‘Love You To Bits’ gets straight to the point, announcing itself as an electronic work with electronic percussion and the aforementioned vocal front and centre. Real drums explode in around halfway through and kick the piece up a gear. The first breakdown comes after the vocals exhort that they ‘Love You’ repeatedly and a short linking piece has Bowness harmonising with himself over the sequenced bass from the first section.

A funky guitar loop heralds a more down-the-line band performance which once again melds with the open sequence before part 4 goes on an extended instrumental break with effected guitar being underpinned by more live drums and that simple but earworm-y sequence. There by this time can be no mistaking this for anything else but a pop album, but one which rewards repeated listening as although simple on the surface there are layers of instrumentation that are pulled out with each play.

This is a Steven Wilson collaboration so a sonic surprise shouldn’t come as, well a surprise. Here it’s from of the closing section of ‘Love You To Bits’ which at the end, having revisited the themes and motifs of the previous section closes with a plaintiff brass section playing out like something from ‘Last of the Summer Wine’ than Studio 54

The journey is at this point only half complete as the second half of the album, ‘Love You To Pieces’ opens with Bowness showing again how his voice is more than capable of carrying a song with the simplest of instrumentation to somewhere it really has no right to go. He really does possess one of the most unique tones in modern music, up there with the likes of Paul Buchanan of THE BLUE NILE in its ability to wrench at the heart without you really knowing why. 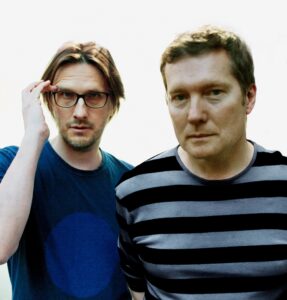 The interplay between synthetic tones and more organic instrumentation gets swept away in the next section as a driving synth bass carries a vocoded vocal forward, building into a jazzy section of effected electric piano which should give comfort to anyone that has seen Steven Wilson live recently and the playing of Adam Holzman, for it is he…

Overall the second half of the album appears to more contemplative and this is no bad thing giving balance to the ‘dancier’ opening ‘Bits’ section. All too quick, for this listener at least, it’s over with the final part coming across as something you’d here in a piano bar at 3am.

“Time was we mattered…” sighs Bowness at the close of the track. On this showing, NO-MAN still do matter and in spades. This is no misguided sidestep, the band where making music like this 25 plus years ago. In fact the bones of the album stem from demos that old.

As known progressive artists, both Wilson and Bowness have taken their individual brands of modern music in numerous different directions. This is another example of that and one expected to be included in many top 20 lists at the end of the year. A recommended release.

‘Love You To Bits’

is released by Caroline International in CD, vinyl LP, cassette and digital formats