May 15, 2017 / electricityclub / Comments Off on OMD La Mitrailleuse 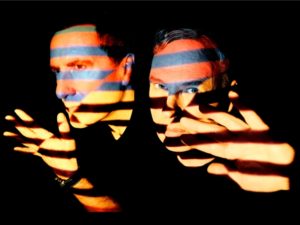 With ‘English Electric’ in 2013, OMD produced their finest album in thirty years.

After the false restart of ‘History Of Modern’ in 2010, OMD founder members Andy McCluskey and Paul Humphreys successfully played to their strengths. There was also the return to the more experimental approaches that were pioneered on their first four landmark albums, as well as references to inanimate objects and points of history as metaphors for other, sometimes more personal topics.

Fast forward four years and OMD launch their thirteenth long player ‘The Punishment Of Luxury’ and a European tour with a striking film for a new track ‘La Mitrailleuse’, inspired by British futurist artist Christopher RW Nevinson’s 1915 painting of the same name.

Directed by Henning Lederer, the animation highlights the futility of war with some solemn battlefield imagery. The mitrailleuse was a type of late 19th Century volley gun with multiple barrels that could fire either multiple rounds at once or several rounds in rapid succession like a machine gun.

Using the ‘English Electric’ bonus track ‘Frontline’ as a blue print, ‘La Mitrailleuse’ is a “grapeshot” collage with gun sounds forming the militaristic rhythm lattice. The initial unsettling mantra of “bend your body to the will of the machine!” is counterpointed by a falsettoed cry from McCluskey.

The fact that this weapon was difficult to manage as well as being highly inaccurate made it a loose cannon, so is this piece a pointed commentary on the current political and sociological climate both here and abroad?

Who knows? But the release of ‘La Mitrailleuse’ is timely…

‘The Punishment Of Luxury’ Album Tracklisting:

Fan presale with VIP options will begin on 17th May, while the general ticket sale will be on 19th May

Christopher RW Nevinson’s ‘La Mitrailleuse’ can be viewed in the ‘1910’ display room at Tate Britain, while another work by the artist ‘Bursting Shell’ referenced in the film is displayed at Tate Liverpool