May 26, 2021 / electricityclub / Comments Off on PERTURBATOR Lustful Sacraments 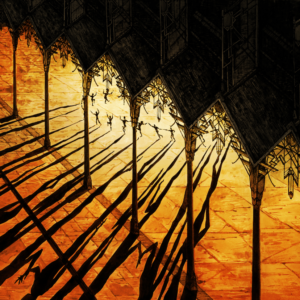 In many quarters, synthwave has become the sub-genre of electronic music that has caused one of the most heated debates over the last few years.

Peaking in 2011 when the soundtrack of the film ‘Drive’ helped to capture the Zeitgeist of a musical style which went on to boost the careers of artists such as KAVINSKY and COLLEGE.

Others such as GUNSHIP, CARPENTER BRUT, DAN TERMINUS and THE MIDNIGHT rode the following (synth)wave, while even mainstream rock acts such MUSE jumped on the coat-tails of synthwave with some appropriation of the genre’s imagery.

But soon it became apparent that the genre was becoming a musical and visual straightjacket as limiting as a STATUS QUO song and trapping many artists in ever decreasing (neon) circles.

The vehicle of Anglo-French musician and producer James Kent, PERTURBATOR has gone on to become a poster boy for the synthwave genre with some superbly produced formative albums peaking with ‘Dangerous Days’ and ‘The Uncanny Valley’; both were wonderfully produced musical hybrids which took the best elements of VANGELIS, TEARS FOR FEARS and TANGERINE DREAM, packaging them in the stunning imagery of cover artist Ariel ZB.

By the time of 2017’s EP ‘New Model’, Kent was starting to distance himself from the constraints of the format and 2021’s ‘Lustful Sacraments’ sees a stellar shift away both musically and visually from the clichés which have come to define the synthwave scene.

There is such a wide disconnect between PERTURBATOR’s new release ‘Lustful Sacraments’ and his previous releases that a casual purchaser would likely think that just from the track titles, this was an album by a Scandinavian metal band rather than an established synthwave artist.

The short instrumental ‘Reaching Xanadu’ provides an epic VANGELIS-style introduction to the ‘Lustful Sacraments’ title track which channels a bombastic SISTERS OF MERCY aesthetic and a bass drone outro progression which recalls DEPECHE MODE’s ‘Stripped’ with sweeping analogue synths to the fore.

‘Excess’ features echoed vocals which recall the sound of post-punk and align PERTURBATOR now with both THE SOFT MOON and TRENTEMØLLER; if a criticism could be levelled at ‘Lustful Sacraments’ then it would be regarding the lyric mix which is buried low beneath the musical elements and this is perpetuated with ‘Secret Devotion’ which features a weak vocal which is submerged in effects which doesn’t do justice to the musical backbone of the song.

‘Death of the Soul’ is one of the more surprising tracks on ‘Lustful Sacraments’, featuring a DAF style synth bassline and fast-paced 16 step closed hi-hats. Taking the template from earlier PERTURBATOR productions, it injects the production with more of an EBM dynamic and the climax of the song with flanged guitars leaves the listener wanting another 2-3 minutes of the track.

‘The Other Place’ is fantastic, coming across like an unreleased SISTERS OF MERCY instrumental to the point where if Andrew Eldritch had any sense left he would be on the phone to James Kent negotiating production rights on their next album… we can only hope! The wonderfully titled ‘Dethroned Under A Funeral Haze’ musically channels THE CURE and SIOUXSIE & THE BANSHEES with an electronic underbelly; again it’s only the lack of killer vocal that stops the track from hitting a peak but the last couple of minutes sees some ‘Blade Runner’ style synths join the mix and all is forgiven.

’Messalina, Messalina’ is a 7 minute hi-hat driven synth rock epic in extreme with a dramatic break down which conjures up imagery of VANGELIS going off grid, taking a Nordic musical vigil and gleefully embracing the best of Scandinavian Metal (with added Yamaha CS80s of course). The slowly decreasing tempo at the end of the piece only adds to the drama of the piece and provides an undeniable centrepiece to ‘Lustful Sacraments’. 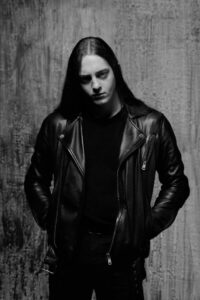 The album climaxes with ‘God Says’ which features Parisian Doom quartet HANGMAN’S CHAIR. The song reciprocates a collaboration which saw PERTURBATOR working with the act on their track ‘Tired Eyes’.

Musically ‘Lustful Sacraments’ is a reinvigorated triumph, it is only the elements of the vocal collaboration work which stops the album from hitting the heights that it should hit.

James Kent has hit on a new template here which will satiate fans of his earlier purely electronic production work plus should hook new listeners with music which combines the very best of electronics and rock in a beautifully produced package. Highly recommended.

Posted in Reviews Tagged with PerturbatorThe Sisters Of Mercy