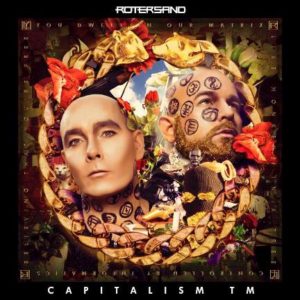 “ROTERSAND is a friend who has been accompanying you for a whole decade on your nocturnal hunt’s Post-Industrial amusement. ROTERSAND is the beast right beside you – twitching, stomping, finally leaping upon you and clinging to you. Want to take us home? The beast can also purr like a black cat if it wishes. The beauty and the beast: an insuperable antagonism? In ROTERSAND both melt into one with complex elegance.” says ROTERSAND’s website, enticing the listener to dive into their twisted world.

The enterprise came into existence in Germany in 2002, when Rascal Nikov joined forces with musician and producer Gunther Gerl.

It wasn’t until the duo expanded into a trio, with the inclusion of techno and electro underground producer Krischan Wesenberg, that their sound really came into its own. The first album, ‘Truth Is Fanatic’

and ‘Random Is Resistance’

followed, each expanding and enriching ROTERSAND’s style, accompanied with their legendary live performances, which, to some, are the best on the scene.

, sporting a front cover of cryptic messages, including “you dwell in our matrix”, “like monkeys in a tree”, “controlled by informatics”, and “believing that you’re free”; each describing the realities of modern human existence in the controlled environment of today.

Indeed the single heralding the long player is the politically induced ‘Torn Realities’. While the anthemic production is larger than life, one cannot escape the signature Virus TI patch, which was previously used by DEPECHE MODE on ‘A Pain That I’m Used To’. That aside, the track is a perfect introduction to big sounding numbers present on this outing, like ‘Monopole’, reminiscent of vintage AND ONE, ‘Disagree’, being a traditional ROTERSAND, or the opener ‘Not Alone’, starting off gently just to open into a full-on trance extravaganza.

‘Hey You’, nautically oriented in texture, which incidentally pairs excellently with the latest album from COVENANT, ‘The Blinding Dark’ released on the same day as ‘Capitalism TM’, brings memories of PET SHOP BOYS’ productions, with an immense club feel and enticing synth. 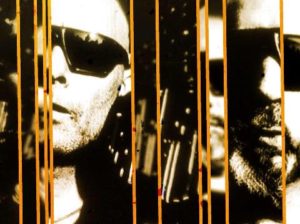 ‘It’s About Us’ attacks from the beginning, with infectious hooks and foot stomping qualities, mixing classic EBM and melodious details, canvassing the lyrical message of a “shift of paradigm”. The sound of the month, accented by randomised filter sequence on the title track again, this time boasts with influences going towards AND ONE again, ‘Virgin Superstar’-style. The cryptic messages from the album’s cover are included in the track, pointing again to its political context.

The closing ‘Überload’ shows that the best has been saved for last. The digital age love story is unfolding upon us with harsh beats from the onset, intertwined with a gentle melody and more synth hymn-like qualities.

ROTERSAND have done what ROTERSAND do best. Larger than life anthems, stomping beats and trance induced comas are to be expected from the beginning to the end of ‘Capitalism TM’.

Who said a political message couldn’t be equally entertaining?

is released by Trisol Records