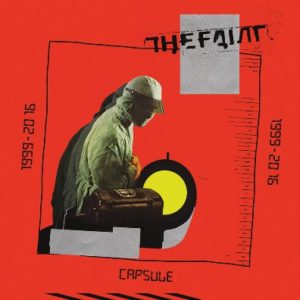 When the new millennium began, things were grim for the electronic pop fan…

The mainstream music scene had been infiltrated by the tedium of landfill indie pioneered by the likes of TRAVIS. Meanwhile on the dance front, as great as singles by THE CHEMICAL BROTHERS and LEFTFIELD were, their albums left a lot to be desired, as tracks went on for far too long with minimal song based structures. However, there were new beacons of hope in LADYTRON and GOLDFRAPP, while synthpop was to become the rogue element of rock bands such as THE KILLERS and THE BRAVERY. But before the latter pair emerged, there was THE FAINT.

featuring ‘Call Call’ and ‘Worked Up So Sexual’ showcased a mix of live drums, punky guitars and squelchy synths in the vein of early ULTRAVOX! and WIRE.

that THE FAINT really found their sound. While Petersen took to programming bass sequences, one crucial element was the recruitment of a death metal guitarist nicknamed Dapose. In much the same way DURAN DURAN were essentially a synthpop band with a heavy rock guitarist bolted on, this unusual hybrid gave THE FAINT a unique template for the time, sounding like BLUR and Birmingham’s most famous boat crew rolled into one!

The deep attack of ‘Agenda Suicide’ from ‘Danse Macabre’ still stands up and indicative of the parent album’s title, with the second half sounding like Marilyn Manson gone electro. Meanwhile from the same breakthrough long player, ‘Glass Danse’ and ‘The Conductor’ took swirling synths and hard dance rhythms into indie rock territory, while still embracing the imperfections of the analogue machinery associated with Synth Britannia. There was also the delightfully odd swing of ‘Posed To Death’

album saw orchestrations entering the equation although overall, it was less immediate than its predecessor. But THE FAINT’s spiritual connection with Britain’s new wave and in particular, Some Bizzare came with the superb ‘Southern Belles In London Sing’, a fine interpolation of the now-classic 1981 anti-war song ‘Remembrance Day’ by B-MOVIE, the Nottingham quartet who appeared on the ‘Some Bizzare Album’ alongside SOFT CELL, BLANCMANGE, THE THE and DEPECHE MODE.

The buzzing string embellished groove of ‘Desperate Guys’ from ‘Wet From Birth’ also deserves its place on this collection, but one glaring omission from this period would be the superb ‘Symptom Finger’, a hypnotic ‘Zoo Station’ styled romp.

on their own blank.wave imprint and rather fittingly toured with LADYTRON. 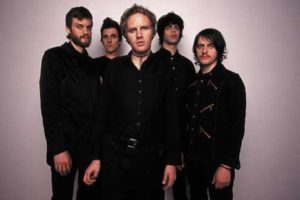 But like many acts at the time, the onset of illegal downloading and reduced demand for physical product saw the band give the CD away on tour with sales of T-shirts.

The stuttering electronic funk of ‘The Geeks Were Right’ proved the band still had it, although it would be 2014 before they released another album in ‘Doom Abuse’, represented on ‘Capsule: 1999-2016’ by the appropriately foreboding climes of ‘Damage Control’.

‘Capsule: 1999-2016’ is a good introduction to THE FAINT, with its bias towards the band’s best two albums ‘Danse Macabre’

and ‘Wet From Birth’

. While almost destined to remain a cult proposition, THE FAINT deserve recognition for their part in keeping the sound of the synthesizer alive during a period when it had almost been hounded to extinction.

is released by Saddle Creek in CD, double vinyl and digital formats