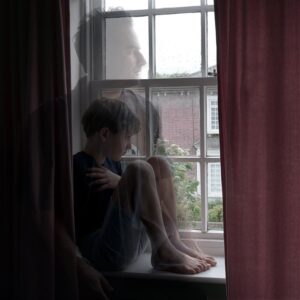 Having captured the claustrophobic solitude of lockdown with ‘Small World’, SNS SENSATION follow-up that slice of disco noir with a variation on the theme.

Entitled ‘Your Door’, this reflective electronic number deals with the effect that isolation has on the wider human condition.

Highly influenced by the cool synthpop templates of NEW ORDER and PET SHOP BOYS, Sebastian Muravchik is the man behind SNS SENSATION.

Muravchik was best known as the front man of HEARTBREAK and while that project’s Italo sheen remains one of the continuity elements within SNS SENSATION, less prominent though are the heavier synth rock elements that came via musical partner Ali Renault. However, ‘Your Door’ springs a surprise with some distorted guitar in the final third to counterpoint its more wistful elements.

The promo music video for ‘Your Door’ is another inventive home-made affair and tells the story of a young school boy dealing with lockdown, unhappy about being taught by parents and unable to meet friends, but finally getting to enjoy the wide-open spaces of the great outdoors.

The video is a London-based present day colour tribute to Francois Truffaut’s 1959 nouvelle vague drama ‘The 400 Blows’, a story about a misunderstood Parisian adolescent who struggles with his parents and school. Elements could also be thematically seen to visually resonate a similar sentiment to TEARS FOR FEARS and the artwork for their debut album ‘The Hurting’.

Being in lockdown has made many feel like John Tracy in Thunderbird 5 and the subtle processing on Muravchik’s voice creates a hazy cabin fever feeling that aesthetically conveys all manner of frustrated emotions within ‘Your Door’.

In an interview with ELECTRICITYCLUB.CO.UK in April, Sebastian Muravchik said: “After the initial shock and the panic that ensued from becoming aware of what this pandemic could be and mean, I felt that facing the reality of it head-on in my work was a way of coping: perhaps a sense of control, even if illusory.” 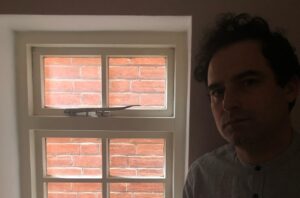 He concluded that “My contribution is to help make some sort of sense of this reality; to try to understand more”.

But Muravchik admitted “the biggest challenge of all, bigger than the very real and horrific death we all justifiably fear, is freedom. And for as long as we manage to stay healthy, freedom is everywhere.”

‘Your Door’ is available now as a download single direct from https://wearesns.bandcamp.com/