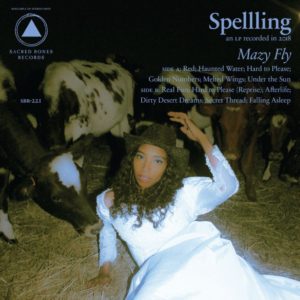 “A winged spirit” moving through SPELLLING’s new album is ‘Mazy Fly’. Chrystia Cabral, known as SPELLLING, is based in the Bay Area and her musical concoctions are born within the sanctuary of her Berkeley studio.

Having started sound experimentation in 2015, to follow in the creative footsteps of a lost love, Cabral’s objective was merely to preserve and further the artistic legacy of someone who could no longer do so. Her first long player ‘Pantheon of Me’ in 2017 was drawn from images in her dreams, making her vision as unique as it is ubiquitous.

follows in the footsteps of dream imagination, combining the elements of fear of destruction and the thrill of the exploration of the unknown. Enter the bizarre slurred tones of the opening ‘Red’, texturally evoking images from David Lynch’s Twin Peaks Black Lodge. What’s not backward comes forward, vividly leading into the curious mind of SPELLLING’s.

Dark and gloomy images of the passage of slave ships into the colonial worlds over the ‘Haunted Water’ float vividly over sequenced melodies, offering vocals that John Fryer would gladly accept for his BLACK NEEDLE NOISE projects, where Cabral sounds like Jarboe meets Zia.

The deeply personal ‘Hard To Please’ marries catchy synth bass with layered vocals, which fly away into the atmosphere, breaking away into the great wide universe, meeting the unthinkable in the process. The beautifully presented ‘Golden Numbers’ is relentlessly captivating with the extraordinary organ arrangement, but in itself, it’s just a pop song with a twist, or she will have you think…

Don’t let the ‘Melted Wings’ slow you down, for this celestial offering holds you close to ‘Under The Sun’, which is “a cosmic prayer for good fortune that sees the potential for radical newness in our own lives in the births of stars”.

Who’s having the ‘Real Fun’? The aliens, of course! They have travelled to Earth to sample the musical genius of SPELLLING, as if enclosed in a bubble, which rolls and rolls uncontrolled across the world, showcasing the samples of humanity, all for the extra-terrestrials to witness. And they’re experiencing the best she has to offer; epic synthy cinematic soundscapes and voices that defy all logic.

Can Cabral’s music be taken to the ‘After Life’? With the captivating riffs of bluesy guitar and operatic singing, she’s in for the win again. Angels chanting above, while she’s floating into the misty air, fulfilled and appreciated. Just for a second, let’s go back to the glorious psychedelic era and sample the drugs that will make everything good again, as presented in ‘Dirty Desert Dreams’, oh she’s luscious. 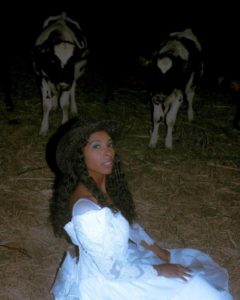 But beware from pulling on the ‘Secret Thread’, as that’s where ‘Mazy Fly’ flirts with the sky at night. A more delicate, almost of the dainty qualities of Fifi Rong, this gentle ballad is like a giant blanket. Everything will be all right in the world, so don’t fear of ‘Falling Asleep’ with its wholesome textures of regenerating and restoring qualities.

Cabral’s offerings are certainly not for general consumption, and she’s far from craving such.

Her imaginary world craves a better tomorrow and ponders human progress, trying to digest how technologies and inventions gave the mankind endless possibilities, at the same time driving towards total devastation.

‘Mazy Fly’ isn’t gloomy in its persuasion though; it’s actually an optimistic journey towards the hopefully better unknown.

is released by Sacred Bones Records on 22nd February 2019 in Vinyl LP, CD and digital formats, pre-order from https://www.sacredbonesrecords.com/products/sbr221-spellling-mazy-fly