January 30, 2021 / electricityclub / Comments Off on STEVEN WILSON The Future Bites 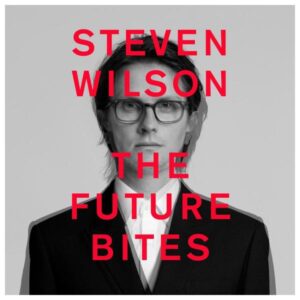 The future has arrived, and its bloody fantastic.

Delayed it may have been but the wait is well worth it.

With the release of ‘The Future Bites’

, his sixth solo album in just over a decade, Steven Wilson will hopefully and finally put to rest the calls to reform the dodo dead PORCUPINE TREE.

Not that I wouldn’t be front of the queue for such a reunion, I would… but the confines of that band project wouldn’t have furnished us with a release as compact, assured and ‘muscular’ as TFB.

Focused on the modern twin malaise of consumerism and identity, this album clocking in at around 41 minutes is no prog rock behemoth. In keeping with the overall concept, premiere of ‘Personal Shopper’ aside, every track does what it says on the tin and gets out of your face almost as quickly as it arrives.

Opening with the just over a minute long ‘Unself’ and segueing into complimentary cut ‘Self’, this will immediately confound expectations, and not just with the briefness of running time. A distant acoustic guitar accompanies a typically melancholy Wilson vocal which reminds us “all love is self…”

‘Self’ concentrates on one of the album’s key themes, the impact of influencers and the like via social media. At a time when the new norm are the twins of self-delusion and the self-absorption, this track asks what is left when all there is the ‘Self’? The answer is very little of value.

‘King Ghost’ is one of the tracks released as a single that has caused apoplexy in certain areas of the prog rock fan fraternity. A wonderful piece of modern electronica that pivots around a marvellous vocal performance from Wilson, the comments that accompanied the release at the tail end of last year actually play into another of the TFB’s key themes, consumerism and the entitlement that comes with that in the modern age. This is the standout track on the album, beautifully produced and played.

’12 Things I Forgot’ could easily have come off of the recent album of BLACKFIELD, one of Wilson’s numerous side projects. At first, it appears to be a simple pop song that wouldn’t be out of place over the end titles of a rom-com but the lyric is way more biting and, to this listener, seems to answer some of the critics that slated the album months before it was released.

Just as you think you have a handle on the album a curve ball arrives with ‘Eminent Sleaze’. This is the kind of thing 10CC would have put out back in the day, tongue-in-cheek with loads of knowing nods to other musical genres. This shouldn’t come as a surprise to anyone who listens to Wilson and longtime collaborator Tim Bowness’ wonderful ‘Album Years’ podcast. The breadth of their musical knowledge and influences are wide and this draws on many of those, as does the whole album.

‘Man Of The People’ is a straightforward track that has another excellent vocal performance from Wilson underpinning a mostly electronic backing. This highlights the overall lightness of production in the album; it has a wonderfully wide soundstage that really does reward repeat listening on headphones. Wilson and production partner David Kosten should be commended on refusing to go down the everything louder than everything else route, which worked for MOTÖRHEAD but not many other artists.

The album’s debut single ‘Personal Shopper’ caused another shockwave through the prog world… where are the guitar solos? The ‘real’ drumming? This is idiotic, though when you work with someone like Craig Blundell who is a human drum machine; it’s easy to see how they all got confused!

And is that Elton John?!?! Some of the naysayers are still wiping the tears away with the sleeve of their ‘Selling England By The Pound’ tour T-shirts. Having well-known shopaholic Elton read a shopping list is another nod to the humour that permeates this release. The biggest joke is on those that want another album full of ‘Raider II’s… this is the longest cut on the album. 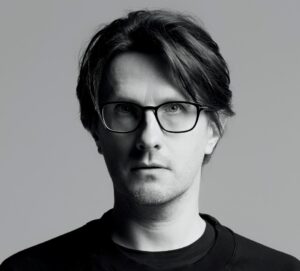 ‘Follower’ delivers the drums and guitars demanded by traditionalists, but it’s more garage punk than grandiose prog. There is even a guitar solo (although it’s not ‘Regret No9’) and some 70s style arrangement in the bridge, but think SPARKS rather than CAMEL.

And with ‘Count of Unease’, we reach the end of what in places is a breathless 41 minutes. This has more than a passing nod to the likes of later TALK TALK and the Tim Bowness albums, with brass tones and a vocal that fades off as it arrived in ‘Unself’, in a wash of reverb and melancholy.

The usual Wilson special edition boxset (yes, the irony isn’t lost, no need to over egg it!) adds additional tracks including a wonderful cover of LONELY ROBOT’s ‘In Floral Green’ which originally appeared on the B Side of ‘Eminent Sleaze’. This repays LONELY ROBOT main man John Mitchell’s cover of PORCUPINE TREE’s ‘The Nostalgia Factory’… these should all be looked upon as extras, not as additions to the main album if that makes sense. Most listeners will only consume the core product…

In addition, mention should be made of ‘The Future Bites’ Sessions released on YouTube which has seen Wilson in the studio performing tracks from the album, a couple of earlier songs from his career and a quite wonderful cover of Taylor Swift’s ‘The Last Great American Dynasty’. A truly eclectic artist, it blurs the lines and keeps ELECTRICITYCLUB.CO.UK’s own Chi Ming Lai happy at the same time! ?

Steven Wilson has once again with ‘The Future Bites’, demonstrated why he is held in such high regard. An artist that has the bottle to plough his own furrow and do his own thing should be commended, especially when it is as well realised as ‘The Future Bites’.

In this instance an example of self-belief we can all get behind. An album that, even this early in 2021, will be vying for top spot in many people’s end of the year lists come December.