November 17, 2016 / electricityclub / Comments Off on A Short Conversation with AUTOMATIC WRITING 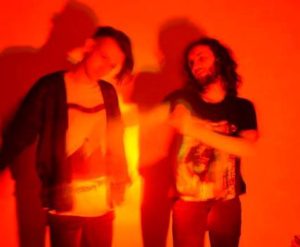 Sibling duo AUTOMATIC WRITING have been steadily building their profile since the release of the brilliant debut 45 ‘Falling’ b/w ‘Continuous’ in late 2012.

They featuring the sombre baritone of Neave Merrick and the synthesized post-punk interventions of brother Jamie.

Artists such as BRIAN ENO, SPARKS, KATE BUSH, NEW ORDER, THE HUMAN LEAGUE, JAPAN, PET SHOP BOYS, THE SMITHS and THE WALKER BROTHERS have shaped of their sound.

While their 2015 EP release ‘New Colours’ may have provoked a mixed response in some quarters, AUTOMATIC WRITING remain determined to pursue their oblique modern art for art’s sake, as indicated by their most mutant recording yet in recent single ‘Blue Unicorns’.  Neave Merrick spoke to about “Warm Jets, Nite Flights and Wuthering Heights”…

Bands featuring male siblings are often known to be quite fractious partnerships. What is the creative dynamic like with your brother in AUTOMATIC WRITING? 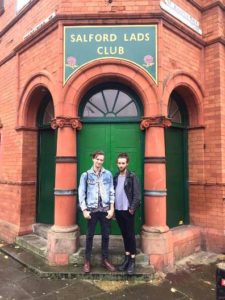 Well our roles are quite clearly defined so we don’t really ever tread on each other’s toes. We haven’t had any Gallagher style spats…. yet haha!

So how would you describe the music you make?

Psychedelic synthpop from another galaxy…

AUTOMATIC WRITING appear to draw influences from all sorts of sources?

Over the years we’ve been just as influenced by directors, authors and visual artists as we have been by other musicians. It all goes into the big melting pot.

What were the inspirations behind ‘Continuous’?

Thematically it was inspired by living in London and forcing yourself out of your comfort zone as much as you’d love to stay comfortably inside it sucking on your thumb.

Musically, it was influenced by a guy called RODION G.A. who made all this amazing psychedelic synthpop in Romania in the 70s and 80s and YELLOW MAGIC ORCHESTRA who I’m sure anyone who follows ELECTRICITYCLUB.CO.UK will know a lot about!

‘Continuous’ perhaps has a harder, more pronounced percussive template that some of your other material?

Yeah possibly it does. It really needed hard brutal drums to cut through the mix and drive the song forward. Still really pleased with the snare sound on that track.

The other side of the single ‘Falling’ seemed to be a perfect companion to ‘Continuous’?

They definitely have a thread to them. I was initially going to put ‘Continuous’ out with a B-side but I thought ‘Falling’ really complemented it so we decided to put out a double A side instead. Still really proud of that single.

You sort of went back by issuing an EP ‘Introduction To Floating’ in 2013 which contained earlier material, was there any particular reason for that?

Well after the ‘Continuous/Falling’ single came out our fanbase really expanded and we wanted to introduce to people to our previous work as well. Before releasing ‘Introduction to Floating’, those tracks were spread all over the interweb so we thought it would be nice to compile them altogether in one place. We also felt they worked really well together as an EP too.

What drew you towards covering ROXY MUSIC’s ‘More than This’?

Quite simply, I’ve always loved that song so I thought I’d give it a bash. It was basically recorded within about two hours one evening. Very self-indulgent but we got a good response from it anyhow!

The ‘New Colours’ EP came out in the summer 2015; how did you feel that was received?

Well, it was the first time we’d got some dodgy reviews and it was quite hard to take at the time. When you’ve poured your heart and soul into something and people pan it it’s always hard to take. I’m still really proud of that EP anyway and the title track has become a real fan-favourite.

Is the album format dead? Is the long form EP a more practical showcase in the modern music environment for independent acts?

I think until you’ve built up a big enough following, I really think a single or an EP is the best way to get your music out there. We all know most listeners just select tracks and add them to playlists. I’m part of the old-school who actually love albums, so we’d love to put one out one day when the time’s right

Do you think your most recent single ‘Blue Unicorns’ released earlier this year is representative of where AUTOMATIC WRITING are musically at this time?

Definitely! Our music has a real kaleidoscopic and psychedelic feel to it now. We’re really pushing ourselves to expand our sound and I think ‘Blue Unicorns’ is a great snap-shot of that. 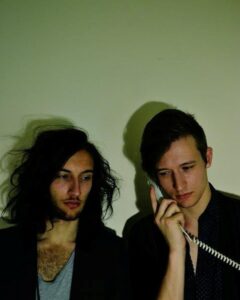 You used an Omnichord for a new track you unveiled called ‘Moon Palace’, what do you find fascinating about that instrument?

Well it has a really naive and beautiful sound to it and it’s a joy to write on, mainly because it’s so primitive. I strongly believe that we’re defined by our limitations so I think it’s good to restrict yourself sometimes, otherwise you can get lost in the endless possibilities of a DAW instead of actually getting stuff done and creating your own sound.

What’s next for AUTOMATIC WRITING?

As well as working on loads of new material, we’re actually looking into doing our own podcast.

We’ve been meaning to do this for a while and it’s looking like we’re finally going to get round to it. We also want play some festival dates next year so we’ll see how that goes!

ELECTRICITYCLUB.CO.UK gives its grateful thanks to Neave Merrick