May 17, 2021 / electricityclub / Comments Off on AESTHETIC PERFECTION: The Industrial Pop Interview 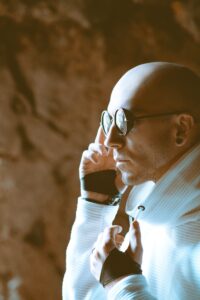 It’s an industrial pop project that can veer in and out of electro, EBM, goth, alternative rock, metal and aggrotech, thanks to Graves’ love of artists such as diverse as Justin Timberlake, Darren Hayes, Michael Jackson, David Bowie, Trent Reznor and Marilyn Manson.

Following 2019’s ‘Into The Black’ album, Graves announced a 2021 schedule of releasing one AESTHETIC PERFECTION single per month funded by his Patreon supporters. It is a return of sorts to Graves’ singles only experiment of 2016-2018 which allowed him the freedom to broaden his vocal and production horizons, with the result being one of the best recordings of his career in ‘Rhythm + Control’.

The most recent single ‘Gravity’ has been produced by Rhys Fulber of FRONT LINE ASSEMBLY. It reflects on Graves’ struggles to keep his feet on the ground as he loses touch with reality, crushed beneath the weight of existence, while slowly being pulled away from it. It’s a feeling that many can relate to.

Daniel Graves gave another enlightening interview to ELECTRICITYCLUB.CO.UK about the future of music and how he is responding to an ever changing market place.

After your singles experiment of 2016-2018 which included ‘LAX’, ‘Love Like Lies’, ‘Rhythm + Control’ and ‘Ebb & Flow’, you produced an album ‘Into The Black’ in 2019. And now you are back with a run of singles at a rate of one per month, why have you returned to this “singles” format?

I’ve always believed the singles format to be the way of the future. From an artistic point of view, I looked at the creation of ‘Into The Black’ kind of like a commission; as if I were a sculptor or painter. It wasn’t something I would have created had I been left on my own, but I enjoyed the process and am happy with the result.

That doesn’t mean I think the way forward is albums. If anything, the pandemic has accelerated the streaming and singles model. I’m watching my friends and colleagues absolutely devastated because the records they’ve been releasing in the last 12-14 months get no traction. The social media timeline turns over every 3-4 weeks, and in order to stay in the public consciousness, you’ve gotta keep up.

So how do you look back on ‘Into The Black’, the pros and cons of making it and then the promotion after? 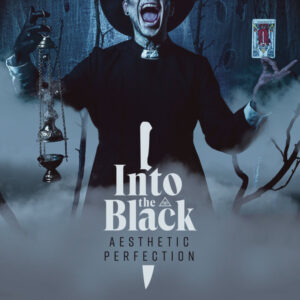 Working on ‘Into The Black’ was a lot of fun, and I did enjoy the singular focus that takes place when trying to complete a big project. I wasn’t on social media trying to promote myself or worrying about tours or any of the ancillary stuff that comes with being an independent musician – I was just locked into the creative mindset.

However, that’s a double edged sword, because you’re not really seeing what’s going on in the world around you. I feel like great artists know how to “read the room” and figure out how their voice fits into the world at large. That’s hard to do when you’ve got your nose buried in a big project.

The promotional aspect is very difficult, because even before the pandemic, “the churn” as I like to call it, moves quickly. You’ve only got a small window of time to drum up interest in your project, and getting people to sit down and consume (and digest) 10 new songs is an impossible task. Back when you could tour, there was some amount of wiggle room, as live shows gave you the opportunity to showcase that new music, and continually remind the world you exist. However, these days, you’ve got your couple weeks and then the door closes.

Do you think your very eclectic music tastes are partly contributing to your mindset to not lock AESTHETIC PERFECTION into any one style or ethos?

I grew up on artists like NINE INCH NAILS and David Bowie and Michael Jackson… artists who continually evolved and took risks. I sort of just assumed that’s what you did when you were a creator. As I got older and more involved in music, I found myself quickly losing interest in bands and artists who didn’t evolve. It shaped my entire creative worldview and made evolution a part of my artistic DNA. Whether or not that helps success or hinders it is anyone’s guess. Perhaps in an alternate universe where I’d stayed the course and rehashed ‘A Violent Emotion’ for the last 12 years, I’d be a megastar! 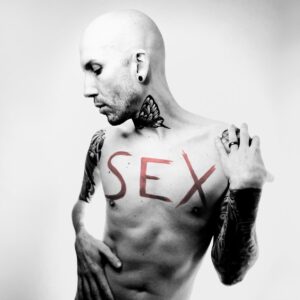 The first single of the schedule ‘S E X’ has a wonderfully deviant tone about it?

I don’t often write songs about sex. I was never sure why until I started writing ‘S E X’. As a creator, I’ve always tried to say things that I haven’t heard from other artists… or I at least try to add new perspectives to subjects and themes.

I suspect, on a subconscious level, I was never inspired to write about sex because so many other artists were doing it. You can’t turn on the radio without hearing a song about sex… so what could I possibly have to offer that would add to the conversation?

However, at some point, I realized that even though there are tons of songs out there about sex, there aren’t a lot of contemporary songs about love and passion. ‘S E X’ is really my way of trying to capture and express THAT view of sexuality.

‘Party Monster’ is reflective of the approach you took on ‘Rhythm + Control’ with a heavier guitar take, twinned with a more electro version, in this case by Deadbeat?

“Deadbeat” is the de facto moniker I adopt whenever remixing my own songs for the club. If you take a look through my discography, you’ll find a number of Deadbeat remixes (usually of tracks that aren’t clubby by nature). The electro version of ‘Rhythm + Control’ should by rights be referred to as a Deadbeat Remix actually, but it was the original version that was completed before Jinxx came through and cut the guitars (which was really just an afterthought). Technically, the version with the guitars is the remix, but it was just so much better than the “original”! 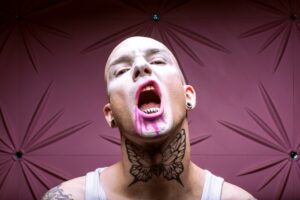 I’ve spent a lot of my time in lockdown reflecting on myself, my life, and my work. The endeavor has been simultaneously traumatic and transformative. It feels almost as if I’ve gone into a cocoon, a dead zone, if you will, to work through all these things – hopefully, to emerge on the other side as something better.

With your known love of pop, what have you thought about THE WEEKND’s recent Max Martin produced synth excursions ‘Blinding Lights’ and ‘Save Your Tears’?

To be 100% honest, I’m not as in love with the synthwave vibes of THE WEEKND’s new tracks as I was with his earlier work. I totally understand WHY these songs were produced that way (that style is HUGE right now), but as someone who is not personally a big fan of retro genres, it doesn’t speak to me so much. They’re well-crafted productions with top notch songwriting, but they don’t feel fresh to me.

In my mind, art is about using inspiration from the past to build something new and exciting in the future. Synthwave really is at odds with my musical philosophy in that regard. However, I *do* feel like synthwave is starting to craft its own identity apart from the nostalgia factor. A lot of the offshoot genres like Industrial Bass Music or EBSM are fresh and really getting my attention. 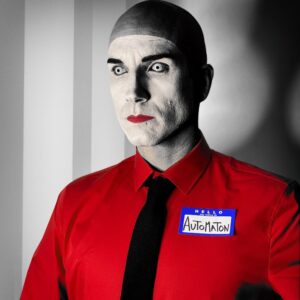 ‘Automaton’ and ‘Gravity’ were both produced and mixed by Rhys Fulber of FRONT LINE ASSEMBLY, how did that association come about?

Facebook Messenger! I literally just wrote Rhys a Facebook message asking if he’d be interested in producing some music with me. As luck would have it, we had a number of friends in common and decided to start working on a couple tracks together. I feel like Rhys’s experience with industrial, metal and pop really make him uniquely suited to both understand and help me realize my musical vision. Definitely looking forward to more collaborations in the future.

Will you eventually compile these 12 singles as an album, or perhaps do a compilation including the 2016-2018 work?

Part of the promise of this project was that if I reached a certain number of Patreon supporters, I would collect the singles and release them as an album sometime next year. It was a very ambitious goal, I wasn’t exactly sure if I would be able to hit it. To my surprise (and many others as well) we hit it within 3 months. Which just goes to show how incredible the level of support is from my fans and from my community.

However, I also have no illusions about the state of the music industry. First of all: The world at large does not care about re-releases. They want NEW material and nothing else. Second: The world at large does not care about albums. Both of those things work against my plans, but I think if I do a very small run of physical releases (probably exactly the count of my Patreon supporters so each of them have a chance to get their hands on one) it will be okay. A good artist knows how to read the room, right?

Regarding the singles from 2016-2018: All those singles were already released on the deluxe edition of ‘Into The Black’ in September 2019!

There appears to still be demand for the long playing format, but is it cost effective for you as an independent artist now?

If there’s demand for the LP format, I don’t see it. I see people talking about it online, but I believe those people to be the vocal minority. Like my Facebook page is filled with people demanding I return to the sound and singing style of ’A Violent Emotion’. However, when you look at the actual metrics, like sales and streams and all of that, you see that the silent majority has a different opinion. When observing the actual metrics of CD sales and how LPs perform against singles in the world of streaming, a very clear picture emerges: Albums are losing ground more than ever before.

Again, it’s my job to read the room. So if the trend changes, you can bet I’ll be back on the album horse. However, I currently see no reason to invest months or years of my life into producing an album when people are only gonna listen to one or two songs and have the rest be forgotten in a matter of weeks.

Which is the upcoming single everyone should be looking out for that might spring a surprise?

The single for June is absolutely coming out of leftfield. It’s an AESTHETIC PERFECTION take on the beloved European concept of a “Summer Hit”. I expect a bunch of VERY p*ssed off people! I’m also planning a Christmas song for December so… get ready!

Have you a personal favourite out of this campaign? 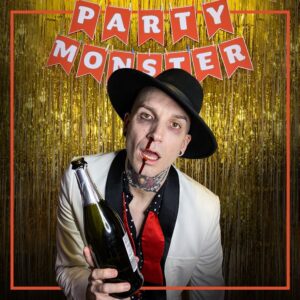 ‘Party Monster’ and ‘Dead Zone’ I think are great examples of my dedication to both brutal honesty and experimentation within the AESTHETIC PERFECTION framework. They may not be the most popular songs of mine, but they certainly mean the most to me.

Have you been able to make any future plans despite everything, how do you think things will pan out?

I’m an artist. I thrive in chaos. I’ve also learned to make the best of a bad situation. I feel like no matter what happens, I will be ready and willing to face it head on.

‘Gravity’, ‘S E X’, ‘Party Monster’, ‘Automaton’ and ‘Dead Zone’ are available to download, along with the AESTHETIC PERFECTION back catalogue from http://aestheticperfection.bandcamp.com/

Information on Daniel Graves’ Patreon is at https://www.patreon.com/danielgraves