The prominent NEWWAVESYNTHPOP legend emblazoned on the front of its striking yellow artwork more than gives away its contents.

Throughout his electronic love affair, Norwegian Stephan Groth embraced all shades of synth, from the stomping EBM, through future pop to instrumental wonders like his 2016 offering ‘Exit Popularity Contest’

which was one of the best wordless electronic albums ever written.

Dabbling in alternative rock and lighter shades of goth, the artist became an icon for a wide variety of electronica listeners, gaining fans all over the globe and lending his production skills on other artists’ outings. Groth is a clever chameleon, whose input into the world of synthpopia is invaluable. But he is not a one man band on stage, but he certainly knows his stuff when working in the studio, from writing, performing and producing the tracks, having been solo at APOP for pretty much ever.

Having been around for 26 years, the man doesn’t stop experimenting. Of course when he started, he had to use much more of his own creativity than the kids of today do. In an interview last year, Groth mused about his beginnings: “Back in the day we had to use our imagination way more and be more creative than today”, but he surely uses it now, even with the vast advances in music technology. 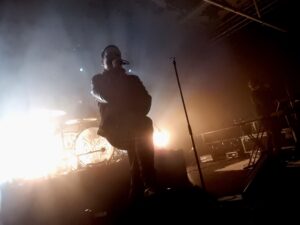 After a few years of waiting and teasing via live premieres, the ‘Nein Danke’ EP presents a comeback to harsher side of synthpop.

‘Soma Coma’ is a timeless piece, now and again nodding towards quintessential PET SHOP BOYS, but the following ‘Atom & Eve’ with its superbly mechanical rhythm sounds vintage enough to mesmerise the hardcore lovers of the classic synth. Hitting hard, ‘A Battle For The Crown’ rolls out the good old drum machine, old style DEPECHE MODE on steroids-like.

Somehow APOPTYGMA BERZERK manage to bring in the old with the new and make it sound luscious. The melody is there, the texture is there and the feeling is there too, what’s not to love.

‘Nearest’ sees Stephan’s brother Jonas step into the limelight on a very cute electronic ballad, which utilises sounds reminiscent of ‘Exit Popularity Contest’ mingled with chosen tracks from ‘Welcome To Earth’. A proper chill out song, ‘Nearest’ has the same ethereal qualities as the best known track from APOP, ‘Kathy’s Song’.

Having toured with VILE ELECTRODES last year, Groth expressed his appreciation towards the Hastings duo’s works by joining forces on a superb version of ‘Deep Red’.

‘Battle Of The Crown’ gets its remix by DRUGWAR, and what remix that is! Tribal, minimalistic, gritty and sleek all in one go, followed by a quaint rework of ‘Atom & Eve’ from ZONE TRIPPER. Arcade games anyone? The C-64 version has those in spades.

The closing ‘Jennifer Corvino’ invites in with hauntingly beautiful classical piano, interjected with synthesised inclusions that create a second to none soundtrack soundscape. Indeed the fictional character taken from the 1985 movie ‘Phenomena’, Jennifer is a student in Swiss boarding school stalked by a serial killer. 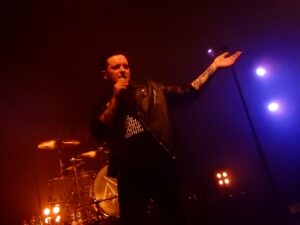 The character played by Jennifer Connelly uses her powers to communicate with insects to catch the killer. The piece is superb, and a great way to wrap up the newest ordering from APOP.

Yet again, the big character in a small package, Groth proves that he does what he likes, when he likes, as ‘Nein Danke!’ is an exhilarating experience of various tempos, mixing the current with the old, so instead of “nein, danke!”, we say “Ja, bitte!”

is released by Pitch Black Drive in CD and digital formats, available direct from https://pitchblackdrive.bandcamp.com/album/nein-danke

Chrystal clear 12 inch vinyl EP available from a number of online retailers including POPoNAUT at http://www.poponaut.de/apoptygma-berzerk-nein-danke-limited-chrystal-clear-edition-vinyl-p-19437.html