July 3, 2017 / electricityclub / Comments Off on BLANCMANGE The Blanc Tapes 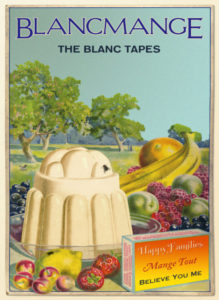 Daniel Miller referred to BLANCMANGE affectionately as “the maiden aunts of electronic music”, while Moby considers them “possibly the most under-rated electronic act of all time”.

Neil Arthur and Stephen Luscombe came to prominence towards the end of the second generation of ‘Synth Britannia’.

Their first EP ‘Irene & Mavis’ came out in 1980 before ‘Sad Day’ was chosen by Futurist DJ Stevo for inclusion on his influential ‘Some Bizzare Album’ which also showcased DEPECHE MODE, SOFT CELL, THE THE and B-MOVIE in 1981. Following support slots with JAPAN, GRACE JONES and DEPECHE MODE, they signed to London Records

in Autumn 1982, it featured their breakthrough hit single ‘Living On The Ceiling’ while ‘I Can’t Explain’ remains one of the most blistering album openers of the era!

Fusing the rhythmic dash of TALKING HEADS with the intensity of JOY DIVISION plus the melodic framework of OMD and YAZOO over the top, Arthur and Luscombe won critical admiration and respectable sales for their debut.

On the back of further hit singles in ‘Blind Vision’ and ‘Don’t Tell Me’, the second brilliantly titled long player ‘Mange Tout’

became the duo’s biggest seller in 1984. Having first featured on ‘Living On The Ceiling’, the Indian musicians Pandit Dinesh on tablas and Deepak Khazauchi on sitar were given greater prominence on the album, while another surprise came with their brilliant cover of ABBA’s ‘The Day Before You Came’. This was considered an odd but daring decision at the time. But with ABBA now fully absorbed into mainstream popular culture and the ‘Bollywood’ sound very much part of modern pop, ‘Mange Tout’ could be considered a cultural prophecy…

However, with synthpop now no longer in-vogue, there was a lukewarm reception for the third album ‘Believe You Me’

released in 1985, despite good crossover songs such as ‘Why Don’t They Leave Things Alone?’ and ‘Lorraine’s My Nurse’. This was leading to a blanc burn out and reflected in the electro-funk of ‘22339’ with a proclamation from Arthur that “I feel like I’m losin’ my mind”. Ultimately, it led to Arthur and Luscombe calling it a day in order to protect their friendship following a concert at the Royal Albert Hall in 1986.

. The bonus discs gather together B-sides, BBC radio sessions, live material and previously unreleased demos and it is these that will be of most interest to BLANCMANGE fans. Meanwhile, the horribly unsympathetic liner notes by Alan Robinson that adorned the 2008 Edsel reissues have now been replaced by commentary from Neil Arthur. 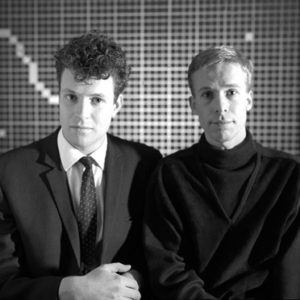 From their first John Peel Session included in the deluxe ‘Happy Families’ extras, ‘I Would’ is dark and menacing while ‘Running Thin’ is toned in resignation; both now actually sound more like BLANCMANGE in the 21st Century than anything from the first three London long players.

, the voxless BLANCMANGE album issued in 2015.

Meanwhile, the organ laden ‘Black Bell’ is an enjoyably creepy lo-fi demo, but ‘Holland’ springs a major surprise with some prominent guitar in the vein of THE CARS!

The ‘Mange Tout’ bonuses include a stark electronic demo entitled ‘How Time Became The Tide’ which is nothing like anything on its parent album, thanks to its science fiction vibe. The claustrophobic and psychedelic ‘If You Want To Be Hip’ is also very different but again, points to how BLANCMANGE are now, rather than then.

The number of unreleased demos from the ‘Believe You Me’ sessions circa 1985 indicates how prolific BLANCMANGE had become. Although they were now considered a mainstream pop act, the moodier, spacey experiments inspired by the earlier days of BLANCMANGE continued with recordings such as ‘A Remedial Course’, another instrumental that wouldn’t have sounded out of place on ‘Nil By Mouth’. 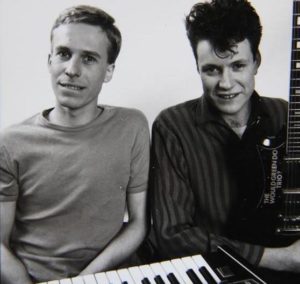 But on the other side of the coin and revealing some of Neil Arthur’s crooner tastes, there’s a fun ‘Switched On Nashville’ styled cover of ‘Gentle On My Mind’, a Grammy Award winning standard previously recorded by Dean Martin and Glen Campbell.

The summery ‘Scream Down The House’ gets rescued from B-side obscurity, but the remaining song demos are perhaps not as enticing as the various instrumentals, although Arthur uses some interesting electronic pitch treatments on his voice for ‘Reach Out’.

As for the live material gathered across the three packages, they quite simply document a band getting bigger and bigger as the venues step up from the little BBC Paris Theatre to Hammersmith Palais to Hammersmith Odeon (where “Bowie killed Ziggy”) in the space of less than three and a half years!

Whether you really need seven versions of ‘Blind Vision’ or six of ‘Feel Me’ is debatable, although the Martyn Ware produced demo of the former captures the rather sombre origins of what was to become a dancefloor smash. Whatever your view, they’re all here and nothing compared to the twelve takes of ‘Promised You A Miracle’ that came with the deluxe edition ‘New Gold Dream’ put out by SIMPLE MINDS!

As its predecessors ‘Blanc Burn’, ‘Semi Detached’, Nil By Mouth’ and ‘Commuter 23’ have indicated, the soon-to-be released ‘Unfurnished Rooms’ continues BLANCMANGE’s exploration into the darker themes and colder sounds that signify a return to the art school roots of their original demos unveiled on ‘The Blanc Tapes’. While Stephen Luscombe has been unable to be involved since ‘Blanc Burn’ due to ill health, Neil Arthur continues to fly the flag.

It’s interesting to think that the 21st Century incarnation of BLANCMANGE has now produced more albums than the original one. And that is something to celebrate… a pint of curry anyone?

is released by Edsel Records, while ‘Happy Families’

and ‘Believe You Me’

are each available as separate 3CD deluxe editions from 4th August 2017. Pre-order via the Official Blancmange Store at https://blancmange.tmstor.es/cart/product.php?id=33045