CIRCUIT3 Technology For The Youth

July 8, 2022 / electricityclub / Comments Off on CIRCUIT3 Technology For The Youth 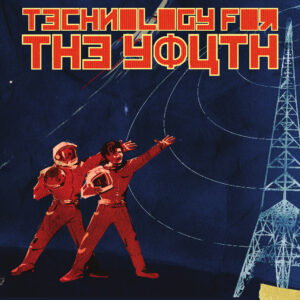 As CIRCUIT3, Dubliner Peter Fitzpatrick mined the classic era of synthpop for his first two long players ‘siliconchipsuperstar’ and ‘The Price Of Nothing & The Value Of Everything’.

But channelling his hopes and dreams through a childhood fascination with space travel as well as Sci-Fi TV shows such as ‘Star Trek’, ‘Space 1999’ and ‘Blakes 7’, Fitzpatrick takes his CIRCUIT3 vehicle on its most ambitious musical mission yet.

‘Technology For The Youth’ is a retro-futuristic narrative on the world before the space shuttle.

While there are past references, these were triggered by a range of extreme events from the last 3 years; the political swipe to the far right, disbelief in the science and denial of the pandemic are the disturbing topics of fear and ignorance that counter the fearless aims to explore space and unite the world.

Recorded over a 2 year period during the pandemic in a home studio that could be compared to sitting in Major Tom’s tin can far above the world, ‘Technology For The Youth’ is a conceptual work that was inspired by Hannah Peel and her space themed musical adventure ‘Mary Casio: Journey To Cassiopeia’. But it could also be compared to ‘Radio-Activity’ by KRAFTWERK or ‘Dazzle Ships’ by OMD which both conjured nostalgia for black-and-white television and short wave radio.

Named after long-running Soviet-era magazine, ‘Technology For The Youth’ is an album where every track has been carefully thought out with a story behind each, whether pop song or instrumental. Capturing a light breeze, opener ‘Ветерок’ gently sweeps and builds for launch, before ‘50 Years Ago’ kicks into action in honour on the first human space travellers Yuri Gagarin, Gherman Titov, Alan Shepard, Gus Grissom and John Glenn with a triumphant middle eight synth solo. 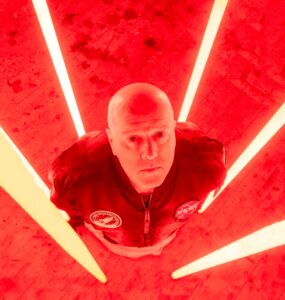 ‘Спутник’ offers a drifting orbital interlude before accents on the thirds shape the lively ‘Star City’. The vocodered tone poem ‘Weightless Part 1’ booms but the floating minimal backdrop of ‘Blinded By The Sun’ provides the setting for an observation on the Trump-era of “alternative facts”.

It’s all a sad indictment of how the human race will die out eventually through its own stupidity, akin to Greek God Icarus who was given wings fastened with candle wax by his father Daedalus and told warned him not to fly too close to the sun; but excessive pride saw Icarus ignore him. He floated up until the sun’s heat melted wax and left him falling into the earth, killing him…

‘Луна’ provides a pulsing Luna ambience but the mysterious ‘Transmissions’ speculates at the alleged “Lost Cosmonaut” crews abandoned by The Kremlin as a metaphor for today’s political cover ups. In 1959, a high-ranking Czechoslovakian Communist leaked information about unofficial missions with Alexei Ledovsky, Andrei Mitkov, Sergei Shiborin and Maria Gromova among those said to have perished in service to the Soviet Union. While no evidence came to light, two Italian amateur radio enthusiasts had made audio recordings of a transmission to support the conspiracy theory that these cosmonaut deaths were indeed covered up. 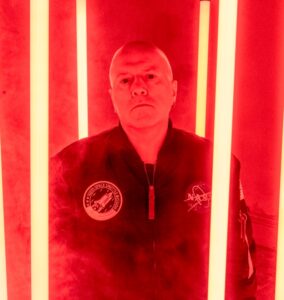 But one very public mission was that of Valentina Tereshkova whose 1963 adventure in Vostok 6 made her the first woman in space. On ‘Valentina Fly’, the minimal structure and string machines of the wonderful piece evoke OMD.

Featuring Fitzpatrick’s Roland Jupiter 4 which was loaned to Martyn Ware for the HEAVEN 17 live presentations of ‘Travelogue’ and ‘Reproduction’ in 2021, the fittingly titled ‘Jupiter City’ makes use of the presets Ware had saved for those shows; with recurring pulses and motifs, it is a delightful homage to those first two seminal albums by THE HUMAN LEAGUE. There are other instrumentals too, such as ‘Laika’ in honour of the first space dog.

With a moody Howard Jones versus Karl Bartos meets ‘Twins Peaks’ vibe, ‘Spacewalking’ tells the story of Ed Dwight, set to be the first African American astronaut but who was failed by the institutional racism within NASA despite having reached Phase II of the Aerospace Research Pilot School.

Not all the material on ‘Technology For The Youth’ is space themed; originally conceived as a homage to THE BUGGLES, ‘Future Radio’ is the bridge to CIRCUIT3’s past synthpop offerings, expressing the joy of the new “here on the radio, receiving in stereo”. Featuring the vocals of Italian singer Alessia Turcato, ‘Overview Effect’ stargazes on two fronts about the life imitating art scenario of William Shatner who played Captain Kirk on ‘Star Trek’ while also becoming the oldest person in space at 90 on board Blue Origin’s New Shepard sub-orbital space rocket.

Fittingly the tranquil ‘In The End (We All Become Closer)’ offers hope as “love is all we need” while using actual communications from the joint Apollo-Soyuz mission of 1975. Reflecting on this handshake in space as a symbol of détente, it is a reminder the world how it has lost its way in recent times and will be set on a disaster course, either through armed conflict or environmental catastrophe unless a united selfless front is actioned… so please LOOK UP!

While not as immediate as ‘siliconchipsuperstar’ and ‘The Price Of Nothing & The Value Of Everything’, ‘Technology For The Youth’ is an intelligent artistic statement on the trials and tribulations of mankind in the context of space travel. Like a musical research paper that draws parallels to today, it prompts a thoughtful mode of listening that encourages further reading.

Just as OMD sang about ‘Tesla Girls’ in 1984 and inadvertently exposed ignorant journalists who thought Messrs McCluskey and Humphreys were making up words, ‘Technology For The Youth’ is a record for the smarter-than-average music enthusiast, not your usual ‘Let’s Rock’ festival frequenter.

‘Technology For The Youth’ is released by AnalogueTrash on 15th July 2022 on digital and vinyl LP formats, pre-order from https://circuit3.bandcamp.com/

Posted in Reviews Tagged with Circuit3

A Short Conversation with MOOD TAEG