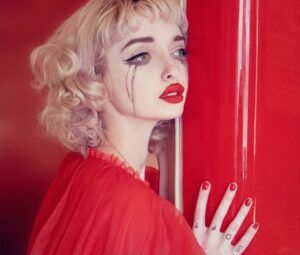 Like a tattooed Norma Jeane Mortenson dropped into Twin Peaks, GLÜME is a shimmering new starlet in the Italians Do It Better stable with her debut album ‘The Internet’ is due out later this year. While ‘The Internet’ does not include her marvellous chilling cover of THE FLEETWOODS’ ‘Come Softly To Me’, it will feature a previous single ‘Body’ and her latest offering ‘Get Low’.

Directed by We Suffer For Fashion Films with choreography by Mark Marchillo, the video accompaniment for ‘Get Low’ is mysterious but glamourous and sees GLÜME tap, fan and ballet dancing while also plonking away on a primitive electric keyboard. Applying some rumbling electronic bass, stabbing vintage synths and simple but prominent digital drum beats, ‘Get Low’ comes over like a wonderful experimental B-side by a fragile girly OMD!