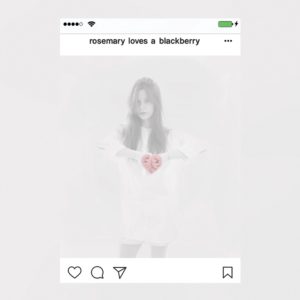 ROSEMARY LOVES A BLACKBERRY is the multi-faceted Russian musician and artist Diana Burkot.

Part of the Anti-Ghost Moon Ray collective that brought the world GAZELLE TWIN, BERNHOLZ and ANNEKA, Burkot’s debut album is entitled ‘❤’, because in Burkot’s own words, it is “an image that cannot be spoken, at a time when visual aesthetics are the priority”.

Like with OMD’s recent single ‘Isotype’, it is a sardonic commentary on how communication has now been reduced to emojis and likes, thanks to the soulless overreliance on social media.

As if to reinforce this concept, the previously unveiled ‘Purr’ is shaped by a gentle conceptual slice of leftfield while its accompanying video challenges “Self-identification through social networks” ?

ROSEMARY LOVES A BLACKBERRY first came to wider attention via the ‘Annual General Meeting Record – Volume 2’ cassette which featured her label mates as well as I SPEAK MACHINE and NEAR FUTURE, a side project of BLANCMANGE’s Neil Arthur.

That particular track ‘Play or Pay’ features on ‘❤’ and like an artier LADYTRON circa ‘604’, it’s a brilliantly screechy percussive set piece with eerie vocal stylings from Burkot that add mystery and intrigue. Meanwhile, the GRIMES-like ‘Plastic Soup’ continues with that mood.

‘❤’ actually starts with ‘Røst’, an enigmatic instrumental comprised of unsettling atmospheric layers, but this is not wholly representative of the rest of the album.

‘Drumly’ does what it says on the tin but with drum machine and kooky rolled vocals, while the explicitly titled intensity of ‘Spring’s Sh*t’ actually comes over as a joyous piece of reverberant electronic experimentation. 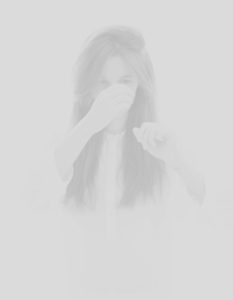 Beginning with a big bass drone, this artful intent is also omnipresent on ‘A Song for Theo’s Animals’; the buzzes and electric shrills over a noisy percussive collage are offset by Burkot’s soprano and a swimmy string machine. Not to be left out, the dramatic boom of ‘Debris’ sits well within its surroundings.

Although not for everyone, ‘❤’ is a promising debut from ROSEMARY LOVES A BLACKBERRY that captures today’s darkness while also projecting a witty angelic innocence.

Delightfully odd, short but sweet, this is a work of stranger things to savour.

‘❤‘ is released as a cassette and download by Anti-Ghost Moon Ray, available from https://antighostmoonray.bandcamp.com/album/-