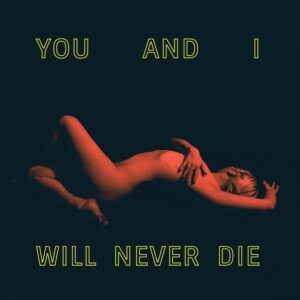 Hailing from Los Angeles, Kanga DuChamp has cultured a sound which manages to musically straddle industrial, synthwave and pop genres whilst meeting somewhere in the middle.

As well as being an artist, Duchamp has developed a sideline career in working on film soundtracks (focusing on the horror genre) including ‘The Conjuring’ and ‘Insidious’ franchises. With early support in her career from Gary Numan and previous production work from Rhys Fulber of FRONT LINE ASSEMBLY, KANGA has developed a sound which draws from a variety of themes including angst, melancholy and sexual fetishism, but shot through with an unmistakable pop sensibility.

Following 2019’s ‘Eternal Daughter’ EP, ‘You & I Will Never Die’ sees KANGA teaming up with producer Justin McGrath (NIN / TOOL) and distribution via a new label Artoffact. After the two minute ‘Preface’, ‘Home’ hits the ground running with a pulsating synth bass that recalls French synthwave artist PERTURBATOR and this leads neatly into the single ‘Godless’.

KANGA is quoted as saying that ‘Godless’ was “really satisfying compositionally, I felt like I got my masochistic Catholicism to dance”; the track documents a toxic relationship with lyrics about “loving you but you’re making me sick” and “I wanna believe so bad it’s gonna put me in a body bag”. Although lyrically dark, the track is melodic with blippy chorus synths coasting above driving effected guitars and a comparison made that this is a female NIN isn’t a million miles off.

‘Brother’ is lyrically the most twisted track on ‘You & I Will Never Die’; recounting a romantic relationship where KANGA herself was cast as a sister to the protagonist in the title. The artist herself seemed less worried about the controversy the incestuous lyrics might provoke; “Brother was intense. Everyone loved the instrumental but when I added those lyrics I had a handful of people say ‘no one is going to play this in a club.’ F*** that, I bet they will! Where’s everyone’s sense of humour?? Listen to the story, don’t get caught up in the disgust!”.

After the midpoint break of ‘Interlude’, ‘Moscow’ is the second single from the album and follows a similar musical pathway to the earlier tracks but the 4/4 kicks are thankfully more broken down and this does provide some sonic relief.

‘Say Goodbye’ stands out with its 909 drums, anthemic chorus and background vocal sampling / bass sound which deviates from most of the other songs on ‘You & I Will Never Die’. The intro to ‘Waiting’ is the most overtly NIN-sounding part on ‘You & I Will Never Die’ and the track features a more dynamic production approach. If a listener was to pick any song which lingers after the album has finished then ‘Waiting’ would be the one; less linear in approach with a vocal which wanders less predictably rather than steadfastly hitting the 4/4 beat. The sound design with sampled guitar plucks and JAPAN-esque synth sounds combines to produce the highlight track on the album. 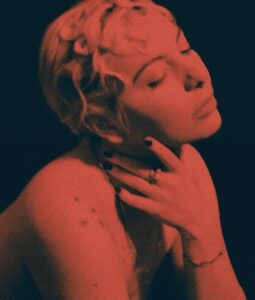 Consuming ‘You & I Will Never Die’ as a whole, it sometimes feels that KANGA is striving to hone that one perfect song which defines her ‘sound’, to the point where many of the tracks have a tendency to blur into one another. Most feature the same driving 4/4 kick, 16 beat sequencer bass and vocal production style; this lack of variety is a shame as DuChamp is an undeniable talent but ‘You & I Will Never Die’ doesn’t quite seem to build on the momentum created by her debut and ‘Eternal Daughter’.

That said, ‘You & I Will Never Die’ is not a bad album, it’s immaculately produced with a stunning cover design, but lacks that certain je ne sais quoi which would help mark it as a classic.

‘You & I Will Never Die’ is released by Artoffact Records and as a CD or download from
https://kanga.bandcamp.com/album/you-and-i-will-never-die