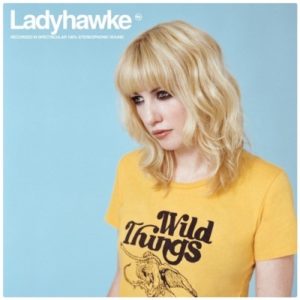 The music industry can be a fickle mistress, one moment you’re flavour of the month, a few wrong steps later and before you know it you’re on a one-way elevator trip to Obscurityville.

Pip Brown AKA LADYHAWKE is undoubtedly acutely aware of this. Back in 2009 her slow burning self-titled debut album was immensely successful, clocking up Gold UK sales after word of mouth and support sets with THE PRESETS helped tracks such as ‘My Delirium’, ‘Professional Suicide’ and ‘Magic’ eventually reach an audience that they truly deserved.

Mixing a sound which was synth and New Wave heavy, but also crammed full of brilliant songwriting and quirky pop hooks, ‘Ladyhawke’ was in many ways ahead of its time, predating the eventual unstoppable electropop ascendency of KATY PERRY, TAYLOR SWIFT and ELLIE GOULDING. After gaining props from KYLIE and COURTNEY LOVE, it appeared that the world was seemingly at Ms. Brown’s feet, but rather than quickly capitalising on the debut album’s success, it took three years before releasing the much delayed ‘Anxiety’.

Instead of attempting to repeat the formula of her debut, ‘Anxiety’

saw a change in sound, hardly any synths or electronics, plus more guitars and a debut single ‘Black White & Blue’ that featured a chorus which unfortunately owed more than its fair share to THE BEE GEES ‘Tragedy’. Despite picking up some positive reviews, the consensus was that Pip Brown had lost sight of what made LADYHAWKE so marketable and successful in the first place…

So now, another four years later and LADYHAWKE returns with ‘Wild Things’

and guess what? Lessons have been learnt and the synths and electronics are back… album opener ‘A Love Song’ is pure unadulterated electronic pop, all syncopated synth bassline, electro drums, a soaring chorus to die for and mercifully no superfluous guitars or Rhodes electric pianos. ‘The River’ is a little more lightweight, but über-catchy with a “na-na-na” vocal hook and the kind of indie sound that you’d expect to hear when walking into Top Shop or River Island.

‘Wild Things’ is the first of two tracks here which owe more than a small debt to TEC favourites CHVRCHES, a stretched out ambient minute long synth pad intro leads into the kind of synth bass and sampled vocal hook favoured by Lauren Mayberry and co. A lighter drum sound and yearning chorus line (“We dance together like we’re wild things in the night”) mean that there’s enough here for the song to stand on its own merits though. 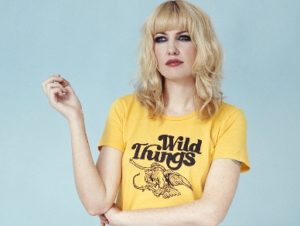 – guitars feature this time, but in a welcome funky New Wave-style vibe.

‘Sweet Fascination’ has a hypnotic synthetic and almost Jarre sounding bassline holding the track together with its chord progression recalling the work of TALKING HEADS.

‘Hillside Avenue’ is the second CHVRCHES-influenced track here, albeit with a splash of PURITY RING thrown in for good measure, again there’s the obligatory sampled vocal, although this time more obviously-so. But a Ragga-inflected kick / snare beat in the chorus just about keeps it from sounding like an out-and-out pastiche.

‘Money to Burn’ starts brilliantly like a PIXIES song played on synths, but unfortunately its chorus doesn’t quite live up to its killer intro and no track really needs a synth panpipe in it, does it? Album closer ‘Dangerous’ has a funky 16 beat arpeggiated Synth Wave bassline and another big, uplifting chorus. The track instrumentation here is beautifully minimalistic, which again is a sign of a well-written song, the more detailed vocal production featuring some subtly autotuned vocals and rounds off ‘Wild Things’ in an up manner.

Whilst never quite hitting the heights of the material on ‘Ladyhawke’, ‘Wild Things’ is at least a major improvement on ‘Anxiety’ and in a nutshell is the album that probably should have followed it. The writing and production is far more contemporary and apart from the two overtly CHVRCHES-style references, this aims to reclaim a sound that initially LADYHAWKE made her own.

Whether Pip Brown can continue to make up the ground lost with her second album is debatable, but at least this is a welcome step in the right direction.

is released as a CD, vinyl and download by Mid Century Records

HYPERBUBBLE Music To Color By